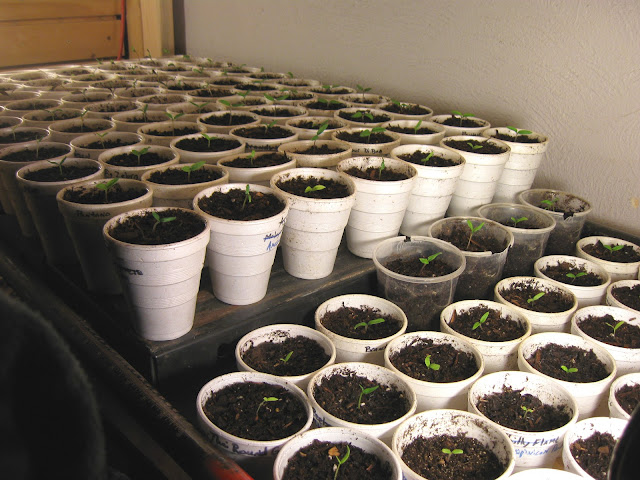 I admit it, I way over planted this year. I thought the seeds weren't germinating because the tray got too hot, so I replanted the seeds and then added some other varieties and now have one-hundred twelve plants with more still popping up. Ah well, rookie mistake.

So exciting! Some of the tomato plants are beginning to form their first set of true leaves which are so frilly compared to their cotyledon leaves. A few red tomato varieties have been added, plus a few of the tried and trues like Brandywine. Most of the 27 varieties of tomatoes are ones I have never planted before. The Wapsipinicon Peach and Kellogs Breakfast are looking a little sad, maybe they don't like the cold in the shop and will perk up when they get out into the sun. Next week the temperatures are supposed to get up into the 60's and 70's (15-21 Celsius), so I'll probably start the inside and outside plant shuffle to harden off the seedlings. The tomatoes won't be going into the ground until the end of April when the weather should be consistently warm.

The only eggplants available in this part of the country is the ubiquitous Black Beauty, so I'm trying to grow some unusual types for fun. 11 varieties of eggplant have been potted up into their individual cups, and so far only one variety has failed after sprouting.

Last year was abysmal in the garden, almost a total failure due to birds and rabbits eating most of my seedlings and the excessive heat, the only things that did truly well was the okra and green beans. Here's to hoping this year will be better and provide us with tremendous yields. Like in 2010, which I like to call the Year of the Tomato where everyone had so many tomatoes a person couldn't give them away, okra grew to 7 feet tall (2 meters), and peppers abounded.
Posted by Phuong at 12:35 AM