Monday is the day of the eclipse and we should have a good view of it here in Western Kentucky. I have to work today, but our supervisor has scoped out a good place to see it and we should be able to take a peak during lunch. People have been buying up all the eclipse glasses, I figure quite a few of them are planning to sell these items for exorbitant prices. Bottled water and bread has been bought out at stores, it's like Y2K all over again. Not sure how the eclipse is supposed to effect water service...

In other news, we have cut down all the tomato plants and cleared out their cages on Saturday. The plan is to till the garden in preparation for fall planting in the next week or two. It took less than an hour to cut down the plants and clear out the cages. There were lots of green tomatoes and ripe tomatoes still left in the garden, but I was ready to move on.

Everything listed below was picked on Saturday. 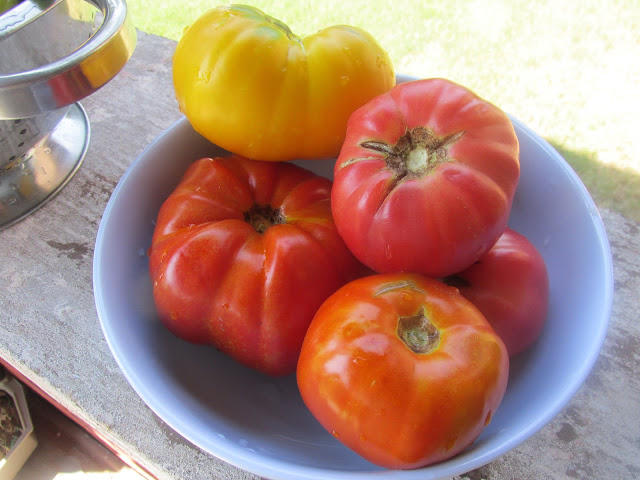 With my husband's penchant for speed during the big tomato cleanup, I did not get a chance to pick any of their fruit. I managed to get a handful gleaned from the ground afterward. 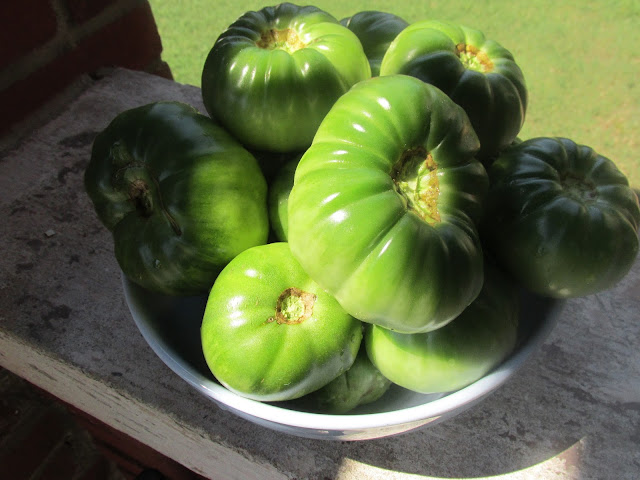 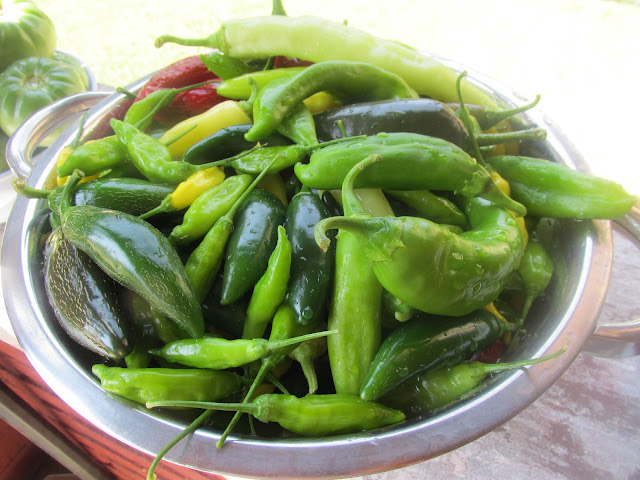 And lots of hot peppers were picked. This is a mixture of Anaheim, jalapeno, Hungarian Hot Wax, Lemon Drop, and Santa Fe Grande. None of the peppers were especially hot this year, probably because of a mild and extra long spring. 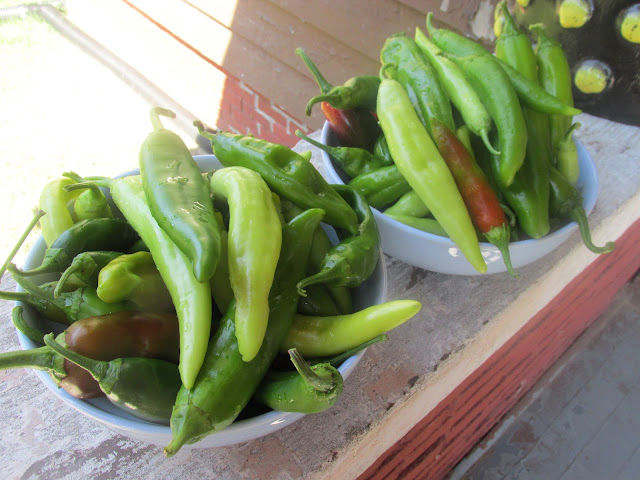 The peppers were under-performers this year. Numex Joe E. Parker an Anaheim type has consistently been unproductive the last 2 years with only a few peppers per plant, although the peppers can get huge. Numex Big Jim is much more productive for me.

The hot peppers will probably get made into pickles, and maybe I'll try freezing a bunch in the form of poppers. 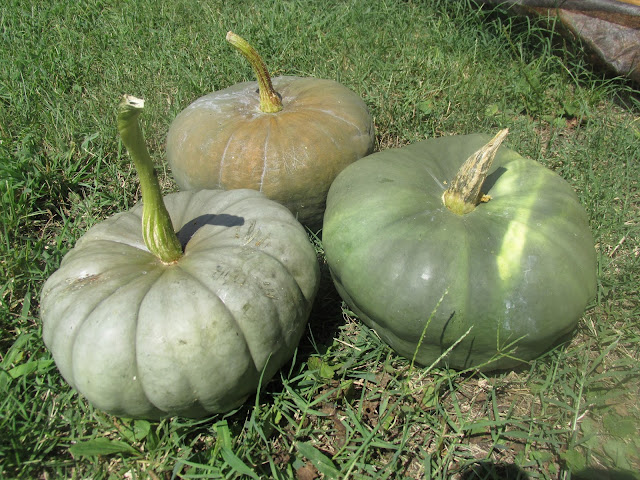 Queensland Blue has massive leaves for a winter squash. We had lots of squash vine borers this year plus the ever present squash bugs. Actually there were lots of new and unusual stink bugs with the majority of whom I've never seen before. Queensland showed signs of vine borer troubles early on. 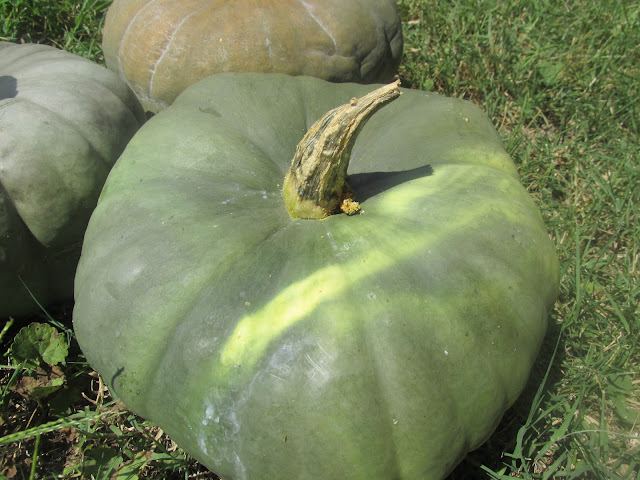 And here's that telltale sign of a vine borer, a bit of "sawdust" at the bottom of the stem. 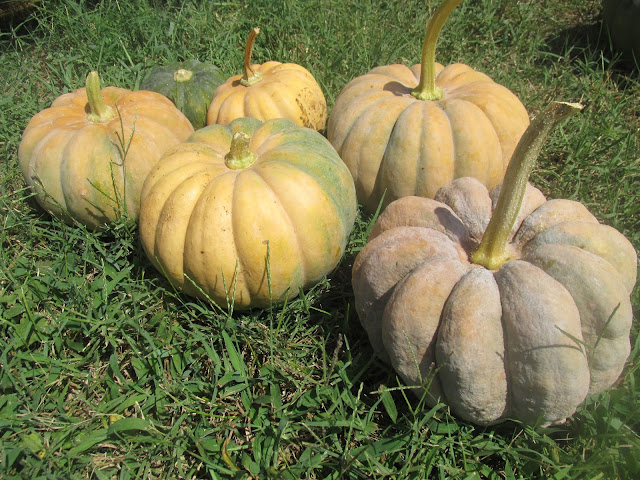 Yokohama was the most productive having produced 6 pumpkins. They're all in various stages of ripeness with even a tiny green one on the upper left. 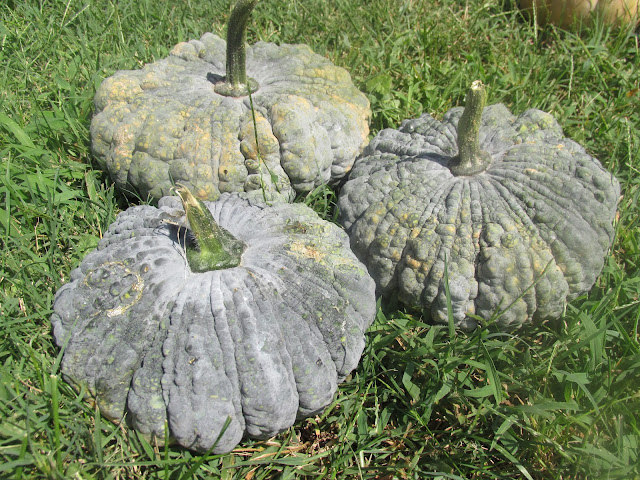 Thai Rai Kaw Tok also only produced three pumpkins. I think all of the varieties grown this year were susceptible to vine borer damage. 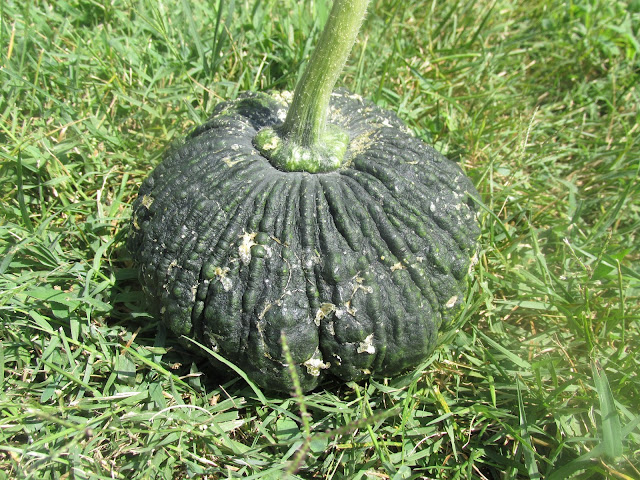 Black Futsu only produced one pumpkin from 3 plants. Next year I'll mainly grow cushaws and butternuts which are supposed to be more resistant to borers. 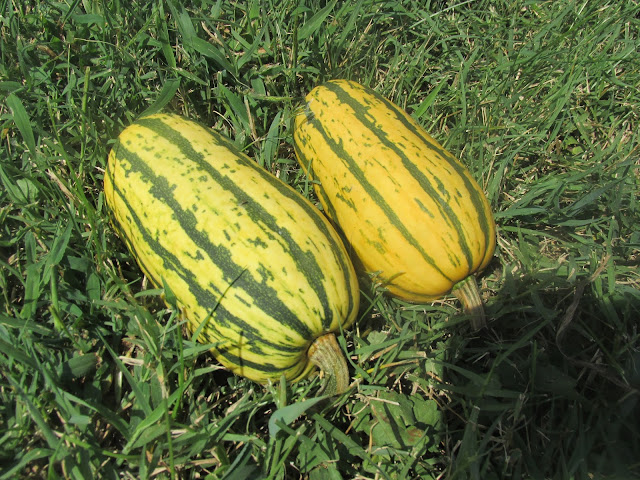 And the two tiniest Delicata squashes ever. They were definitely overrun by the other winter squashes, but I've grown them before and only ever get a couple of fruit.

I ended up canning about 500 pounds of tomatoes and giving away close to 500 pounds this year. This last week I've been playing the avoidance game with the garden. I just couldn't deal anymore. I canned enough quarts of salsa to last us years, then there's tomato juice, quartered tomatoes in their own juice, and green tomato pickles.

We ended up with 38 quarts of green tomato pickles. It was actually fun experimenting with different flavorings for the pickles and making vinegary syrups. I was going to wait a month or two before opening them up and giving our opinions on them.

Some thoughts on this year's varieties. All the tomatoes were early this year by a month and with lots of consistent rain and cooler weather the flavors weren't the most intense, but they were still wonderfully delicious. We were picking large varieties like Pink Brandywine and Black Brandywine by the last week of June. Smaller varieties like Taxi and Black Prince ripened the same week as Sun Gold.

Cherokee Purple and Pilcer Vesy are the least productive tomato varieties for us. I probably won't grow either varieties again after trying these last few years. A couple years we didn't even get a single Cherokee Purple tomato from their plants.

There were lots of scary giant spiders in the garden during the dry part of August. A couple female Black Widows with their round distended bellies and I even saw a smaller male black widow in one of the female's web. The male and female were actually found on the bottom of a winter squash, which is why I always check what's going on underneath those ground dwelling squashes.

But the most interesting spider is pictured down below. So be warned, it is a close-up of a gigantic spider. I was crawling between the tomato beds when I looked up and saw a massive web and this hanging from the middle of it.

And here's the spider. 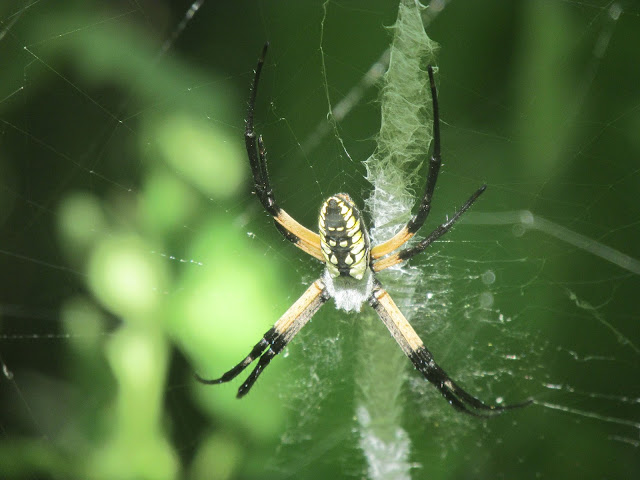 You can even see the tiny hairs on its bottom leg segments.

Please join us at Dave's Our Happy Acres to join in on Harvest Monday. A fun and exciting place where gardeners share their experiences in vegetable gardening.
Posted by Phuong at 4:34 AM 22 comments: