It was definitely marauding birds dead set on their evil plans to destroy and consume all the vegetable seedlings in the garden. Those vile devils went back and ate even more of my tomato plants, there are twenty-five tomato seedlings left out of fifty-two tomato plants with eight of those just consisting of lower leaves since their growing tips were nipped by sharp little beaks. I'm leaving the ones with nipped growing tips in the ground partly from frustration and partly to see if they'll sprout new growing tips at the joint where the lower leaves meet the stem. More than half of my tomato plants were eaten. So now not only a fence is surrounding the garden but I have bird netting stretched over the fencing.

I was ready to give up on the garden this year but my husband insisted rather stridently that all that work and effort to till and get the garden going was not going to waste, no matter how much more money we had to spend on it, even if we had to go out and buy expensive store bought seedlings.

It was a really warm winter with only one snowfall that wasn't even hard enough to stick around on the ground, which is probably why there are so many birds. Usually after the winter we find a few dead birds around the woody area probably from starvation and exposure, but this year there are birds everywhere and their calls and voices are deafening. Also our neighbor who had four dogs has moved away and the dogs were probably keeping the birds at bay. Plus it has been a very dry year so the birds have probably turned to eating plants to get water. Bastards.

It's late in the season to be starting tomato plants but I went ahead and planted more tomato seeds. While at it, I started five different varieties of summer squash/zucchini, cucumbers, bitter melon, and luffa in peat pellets because the weather temperatures have been very volatile and things aren't sprouting in the garden yet or maybe the birds have already eaten them. 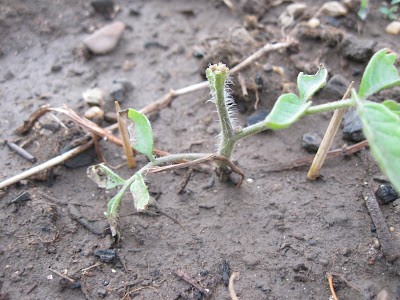 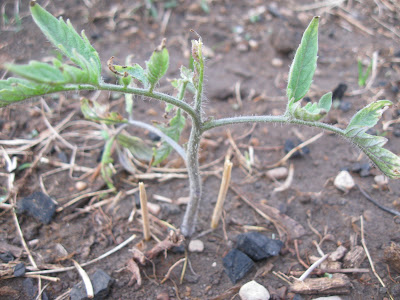 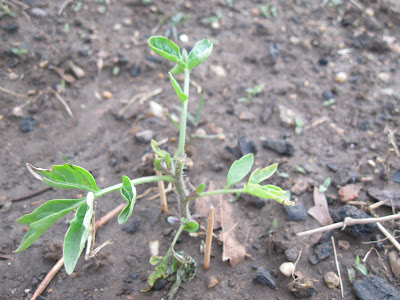 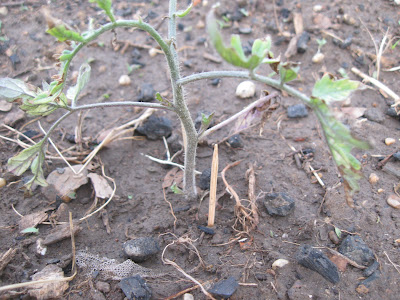 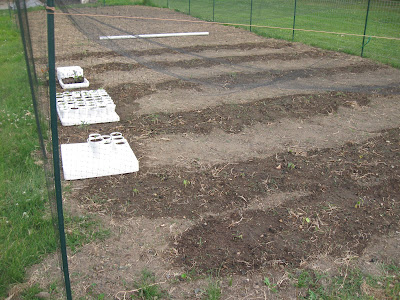 Sweet and spicy chicken soup with thick chunks of potato and sweet potato. A luscious creamy soup served with slices of French bread.

A warm soothing dish with complex spiced overtones. The coconut milk and sweet potatoes provide sweet creamy base notes, while the potatoes and chicken lend an earthy stick in your ribs type meal. Wonderful with warm soft French bread with a crisp crust.

French bread or rice to serve. 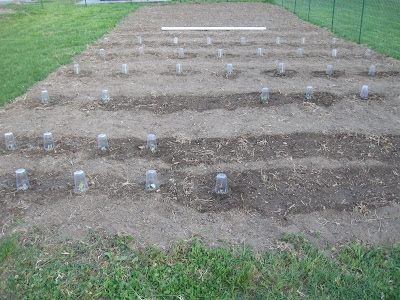 So I peered out into the garden and saw a horrible sight. Holes dug here and there. And twenty-one tomato plants eaten. A few still had their little stems stuck in the ground. Four little okra plants had been gnawed on as well.
Upset would be a mild word but my husband volunteered to spend the day putting up a short wire fence around the garden. He does spend an awful lot of time helping me with my hobby. Tomorrow he's going to make two gates for the fence.
The tomato plants were moved around and consolidated into the beds that were left. It's doubtful that cutworms are to blame since they tend to cut down stems at ground level. There's been birds hanging out in the garden so they might be eating tomato plants. Then again, last year dogs were caught in the garden and dog footprints were found at eaten tomato plants. Ugh, only 31 tomato plants are left counting the extra seedlings that I went ahead and planted out. Two toothpicks were pushed into the ground around all the stems to protect against cutworms in case they were the culprit, and then cups were placed over the plants with soil mounded around the bottoms to protect them from the birds.
(The white thing out in the garden is a 10 foot length (3.05 meters) of PVC pipe being used as a straight edge for planting.)
Posted by Phuong at 5:15 AM No comments:

My husband tilled the garden and incorporated 400 pounds of composted manure into the soil. (The other soil amendments were added during the winter months.)
Now for the fun part, planting all those seedlings into the garden that were started in the dark days of winter in their little styrofoam cups. Nine okra seedlings were planted along with some okra seed to make two rows for a total of 22 plants, hopefully. That should be enough for two people to have a mess of okra everyday and share some with the neighbors. Just nine seedlings were started as a comparison to see if an early start will increase yields or if transplanting will stunt okra's growth. The oldest of the okra seedlings are just a couple of weeks old and had already started to form their second true leaves, the plants are 5 inches tall but I went ahead and buried the plants deep.
Six rows of tomato plants were planted out for a total of 48 plants. Three of the rows of tomatoes will be supported using my husband's interpretation of the Florida weave system and the rest will be staked, it's just too humid here to let the plants sprawl on the ground where the fruit are liable to rot. The tomato plants were not leggy at all so there wasn't a need to trench the plants, trenching seems to make the plants prone to listing to one side so I'd rather just bury the stems deep and mound up the soil.
My husband's only request is to grow some corn this year. Six ten-foot rows should be enough to do it and then watermelon, winter squash, and banana melon will be planted between the rows. This should help smother the weeds between the corn rows. Maybe I'll even plant some scarlet runner beans and yardlong beans to clamber up the corn.
Posted by Phuong at 1:15 PM No comments:

A Little Bit About Growing Okra

Okra is a heat loving plant that is tolerant of heat, humidity and drought although regular watering will produce higher yields and pods that stay tender longer. The plants are almost tree like growing anywhere from 4 to 12 feet depending on the variety. Given space and time the plants will form branches that will also flower and fruit. If a single pod is allowed to reach maturity then the plant shuts down fruit production even aborting immature flowers, and will put all its energy in ripening fruit which similarly occurs with pole beans, zucchini and summer squash.
Okra as a vegetable has a warm green nutty flavor that is difficult to describe. The young pods are tender and soft with a velvety texture. Although pods that are a little more mature and firmer are wonderful because of the young seeds which burst in your mouth when you bite down with a sweetness reminiscent of spring peas. Okra can secrete a thick liquid when cooked this thickening affect of okra makes it an important component of seafood gumbo. Yum. Pods cooked whole in tomato stews, lightly curried in coconut milk, or floured and fried served with fried oysters are just lovely.
Okra pods that are too old will be woody and fibrous so keep an eye out on ripening fruits or they can get away from you and reach gargantuan size. Few pests seem to bother okra except Japanese beetles which will consume the leaves till they look like lace. Personally, I just squish the bugs between my gloved fingers. Being a heat loving plant frost will damage and kill it, so plant after any chance of freezes are gone. Here are a few pictures from last year's okra plants.
The icy beautiful Cowhorn okra flower. 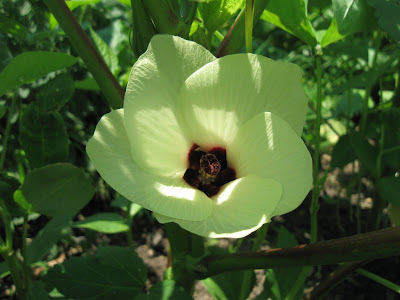 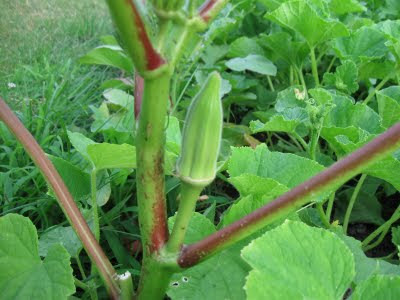 Posted by Phuong at 7:29 PM No comments: