It is very difficult to put a spring garden in Western Kentucky. The ground is usually too wet to rototill until April and by then it's already 80 degrees. And this year we had snow on the ground until the end of March.

Most people go straight to summer vegetables when they start planting. I've tried planting lettuce, radishes, peas, and potatoes in the spring with my first garden here. It got so hot so fast that the radishes were fiery hot, the peas didn't produce nary a thing, and the potato plants were huge and lush with not a single potato in the whole bed which can happen when there are periods of unrelenting heat. The only thing that was edible was the lettuce, and the White Icicle radish seed pods which I found to be interesting and delicious cooked. I do have friends who grow early spring lettuce, but they are windowsill or greenhouse grown.

Fall gardening is where it's at. The heat of summer dissipates in September leaving mild glorious weather till the first frost in November. But I am usually so exhausted from the hubbub of summer, all the cooking and preserving, that a big fall garden can seem daunting.

This year we didn't do any big preserving sprees. Just a lot of fresh eating and cooking from the garden, a little pickling and I made tons of baby food using garden produce. It was a really nice kind of casual summer gardening. Mostly due to the fact my tomatoes and peppers did so poorly this year. But that being said, it makes a fall garden seem fun and exciting.

So I've been spending what little free time I have cleaning out some of the garden beds. Yesterday I dug and raked and got the carrot bed planted out. A couple of the seed packets were ancient from 2009, carrot seeds are only good for 4 years and after that you're lucky if a single seed germinates, so it was good to get all those seeded out. I also planted radish, turnip, and beet seeds in the garden.

Then some more Brussels sprouts got started indoors because the plants planted out in June don't look too great, along with broccoli, kale, mustard, collard greens, Chinese celery, garland chrysanthemum, fennel, lettuce, and a whole bunch of Asian greens. Hopefully it's not too late to start Brussels sprouts or broccoli.

Clearing out the beds to get ready for fall planting:

I've started cleaning out the garden this weekend to get ready for fall planting. Cleared out the bush beans from the Brussels sprout bed and the Pinkeye Purple Hull peas from the asparagus nursery bed. Everything was in decline so it was nice getting things cleaned up. 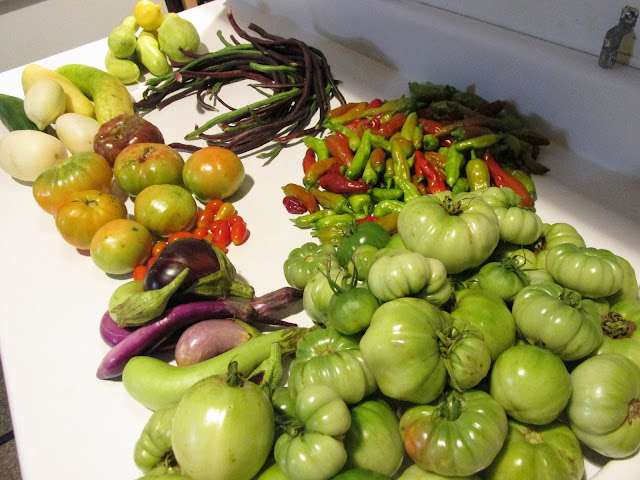 On Thursday all the tomatoes were picked off the vines in preparation for the big garden clean up. I plan on making a half recipe of sweet and spicy green tomato pickle from Simple Daily Recipes. There's some little eggplants, Shishito peppers, red and green long beans, summer squash, and cucumbers. 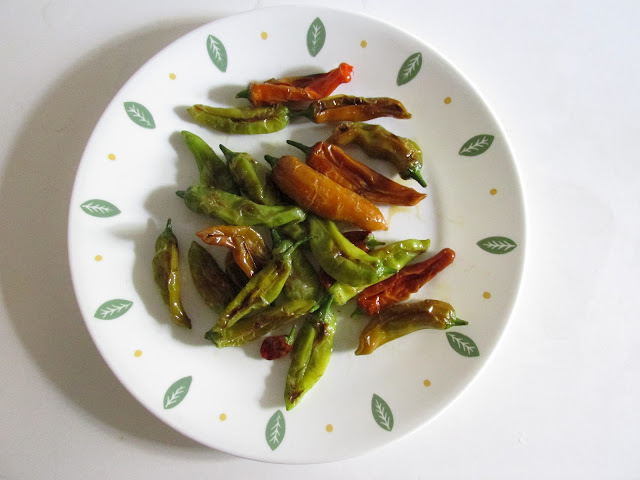 Tried sautéing the Shishito peppers in olive oil with salt and some lemon juice added at the end. Not my favorite. The rest will probably end up in stir fries or pickles. 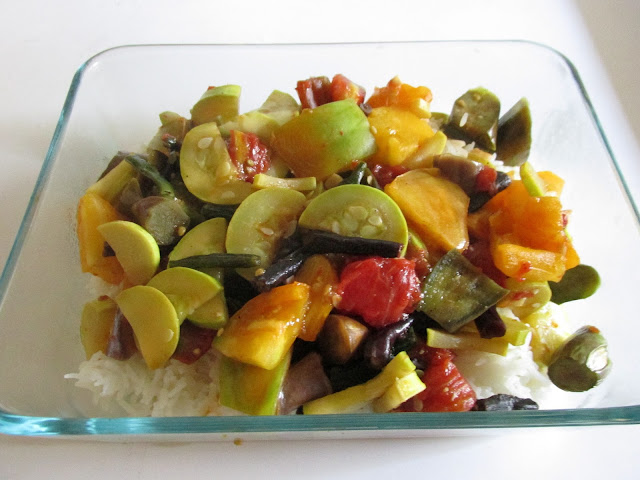 Summer squash, long bean, eggplant, tomato, and garlic stir fry with rice. Quite yummy and what we've been eating for most our dinners.

Please join us for Harvest Monday at Daphne's Dandelions where gardeners and garden enthusiasts from around the world share what they've harvested for the week.
Posted by Phuong at 5:55 AM 26 comments: 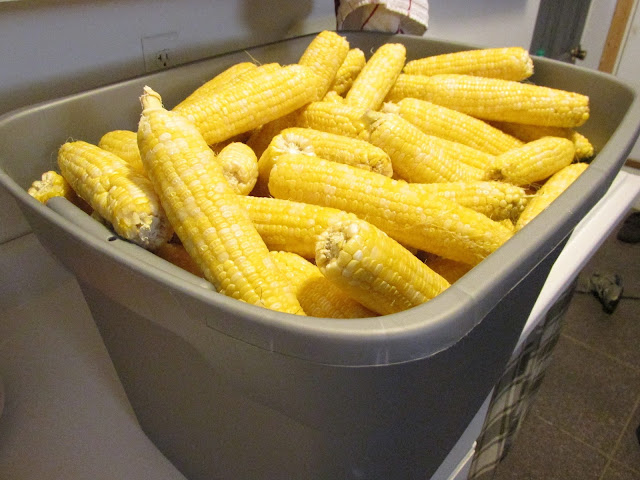