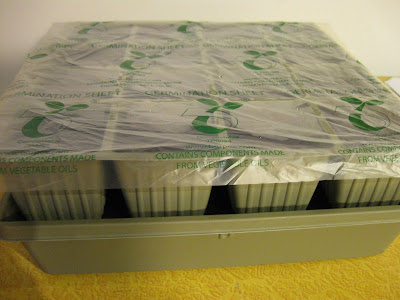 The last days of January are here and western Kentucky has been having a very mild winter. Next week it is predicted to reach 60 degrees Fahrenheit. It is likely that we may have an early spring, and may be able to plant out warm weather crops by April.
Today I started 7 kinds of sweet peppers in a Burpee self watering planting system including Chinese Giant, Banana, Red Cheese, Aconcagua, Quadrato D'Asti Rosso, California Wonder, and Santa Fe Grande peppers. 5 varieties of eggplants were also planted of the Malaysian Dark Red, Early Long Purple, Melanzana, Green Raveena, and Bride varieties. The seeds were barely covered in soil because peppers and eggplants need sunlight to help germinate. Baker's Creek Seeds company even suggests surface sowing eggplant seeds. Bottom heat is also helpful in sprouting peppers and eggplant seeds which are notoriously difficult to germinate. Peat moss seems to inhibit the germination of pepper seeds. Even so, peppers can take four weeks to germinate.
Peppers grow wonderfully well with very little pest problems, although taller plants will need support since heavy rains and wind may break their brittle stems. High nighttime temperatures over 85 degrees can sterilize pollen but won't affect fruit that have already formed.
Eggplant tend to get damaged from tiny flea beetles which munch on the plant's leaves stunting its growth. Large healthy plants seem able to withstand the bugs. I am going to try interplanting with dill and basil as a bug deterrent and laying newspaper down at the base of the plants which is supposed to stop the flea beetle larvae from feeding on the roots and growing up into beetles.
Posted by Phuong at 8:44 PM No comments:

Winter root vegetables like turnips, beets, and kohrabi have a long history as Old World or European vegetables and yet they are rarely used here in America, as are dark leafy greens. These vegetables grow so easily in the late summer to fall months and keep so readily through the dark days of winter. Some winter greens like kale and collards are so winter hardy that light frosts will sweeten their leaves.
Mashed Potato and Turnips with Greens Chiffonade
A warm wintry dish with complex flavorful herby overtones. The mashed potatoes with butter and milk provide sweet base notes. Goes wonderfully with roasts or a nice cut of meat.
Makes: 6 servings
Prep time: 10 minutes
Cook time: 15 minutes
Total time: 25 minutes
Ingredients
4 potatoes, chopped into chunks
1 large turnip, peeled and chopped into chunks
1 collard leaf, chop stem into chunks and slice leaf thinly into chiffonade
2 kale leaves, chop stem into chunks and slice leaves thinly into chiffonade
2 mustard leaves, chop stem into chunks and slice leaves thinly into chiffonade
3 cloves of garlic, pressed through garlic press
1/2 stick butter
1/2 cup to 1 cup milk
Directions
Posted by Phuong at 6:07 PM No comments: