Peppers from the Aerogarden Update

I ended up with 18 pepper plants which were started from seed in the Aerogarden. There's definitely different rates of germination, especially with the older seeds taking more time to germinate. The taller peppers are actually starting to form blooms, which I find odd since they're not that tall. The eggplants didn't come up, but they were especially old seed which I'd been putting off throwing out. 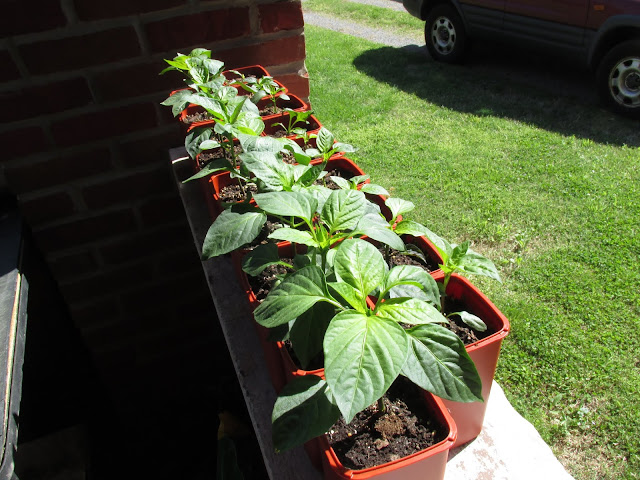 I've had a couple seed starting disasters. It started with purchasing what I thought were peat pellets, but were probably coconut coir pellets. There was no information on the tray in regards to the growing medium. The trays got replanted twice, but seedlings kept dying right after germinating.

My husband thought we should try monocropping something that could just be direct seeded. I was thinking Pink Eye Purple Hull peas and some melons. A big patch of sunflowers would be fun, but that would bring out all the squirrels in the neighborhood. Or maybe, just include one row of sunflowers with long beans grown up them. My gardening plans are in a bit of disarray at this point.

We're still getting lots of rain so it'll be awhile before the garden can be tilled. There might be still time to start a few things.

Edited to add 4/30: I spoke to a friend about my seed starting problems and he thought I might've burned them with fertilizer, which is entirely possible. I used the little bottle of nutrients included with the Aerogarden, but they don't have you add any until the plants are two weeks old. I think that's probably what I did, burned their little roots.
Posted by Phuong at 8:14 AM 7 comments: