This cold weather is driving me crazy. I was promised shorter winters when I moved south. It's March and the temperature is still in the 20's (-6 Celsius). On top of it, the wet cold weather is thwarting the spring tilling of the soil, so we can't even prepare the ground for planting.

In an effort to stave off cabin fever, I've been taking bok choy from the grocery store and after using the stems and leaves, the bottoms are then stuck in water or soil to get them to grow again. Since it's an experiment, the supermarket plants have been braving the outside elements and they actually seem to be growing. I caught a slug munching on a plant last night so I went ahead and sprinkled some crushed eggshells around the bok choy's pot. Needless to say, I squealed like a little girl when I reached down and touched it before registering what it was. A very soft squeal since it was late at night.

The larger bok choy is about a month older and first spent a week in water with leaves forming quickly, but no roots so I stuck it in a pot outside. The other one was just set directly into the dirt a couple of weeks ago but a slug was caught nibbling on it, so who knows if it would have formed leaves earlier without slug involvement. Once the weather warms the bok choy should really take off.
Posted by Phuong at 1:56 PM No comments:

Potting Up the Germinated Tomato Plants 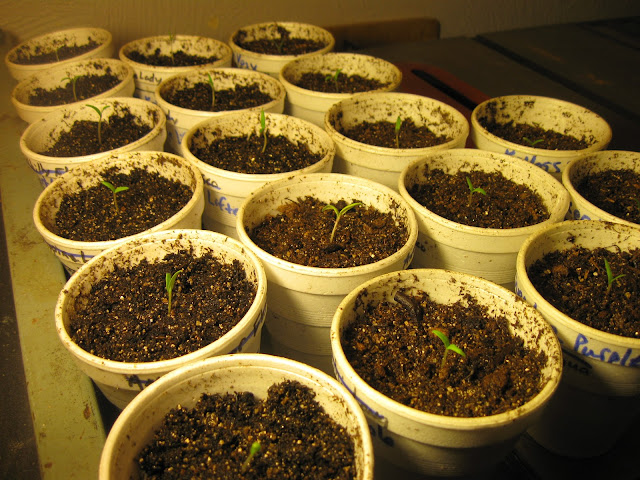 Today, I went ahead and potted up 18 of the taller and leggier of the tomato plants that have sprouted this week into individual styrofoam cups. The seedlings get buried deep since tomato plants are so good about forming roots along their stems, and only one got her little stem bent but hopefully she'll heal up well. All in all, there are now 25 tomato plants growing from fourteen of the twenty-two varieties planted. The newly potted plants are now sitting on top of my husband's table saw out in the unheated studio under a clip-on light. The light will be left on twenty-four hours a day, and another light will get added once more plants have germinated. Being out in the cooler temperatures seems to keep the plants from getting leggy, the stems get stout and leaves thick.

The floating row cover I ordered off of Ebay came in the mail a couple of days ago. I'm pretty excited about using it this year. And I got to pick up a couple of fifty feet soaker hoses at the tool store today, they were on sale for ten dollars apiece and were nye irresistible at that price.

This year the tomato plants will be supported using my husband's interpretation of the Florida weave and the peppers will be tied to tall bamboo stakes. The last time I grew anaheim peppers a torrential downpour snapped branches and bent stems. Even with a few broken pepper plants, 2010 was a grand Salsa Year where I was able to can 24 quarts of thick and juicy, sweet and spicy tomato salsa. Yum.
Posted by Phuong at 11:25 PM No comments: 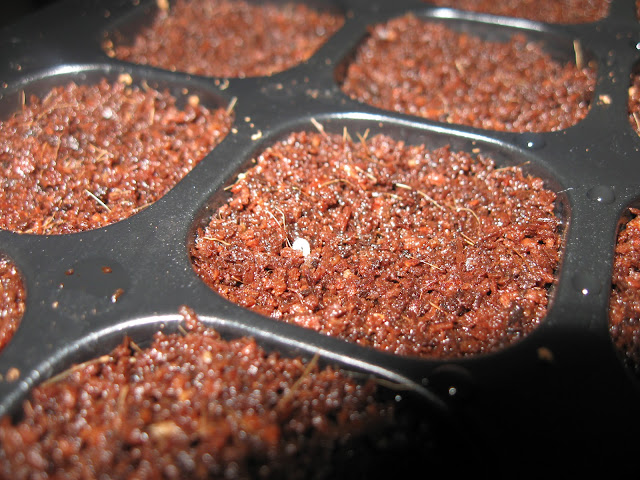 The seeds have finally been planted in the 72 cell seed starter tray on Sunday, March 3rd. Looks like Golden King of Siberia won this year as the fastest sprouting tomato in just four days. As you can probably tell I'm using coconut coir as the starting medium as well as bottom heat, in my experience peat pellets seem to inhibit the sprouting of peppers.

This year the tomatoes have been narrowed down to 21 varieties with some yellow, orange, green, black, red, and bicolor fruits plus one mystery variety from a friend. Last year I remember waiting for some tomatoes to ripen on the vine, but when the orange tomatoes started to rot I finally realized the orange tomatoes were never going to turn red. Please don't laugh too hard at my mistake. I had only grown reddish tomatoes previously and it must have slipped my mind that Djena Lee's Golden was planted out, which happens to be an excellent tomato nice and fruity with tart citrus overtones.

Jalapeno, serrano, and anaheim hot peppers were begun with an eye towards canning salsa in the summer. A couple of bell peppers and banana peppers were also started but I am not holding my breath since the seed is fairly old from 2009.

There were some problems with the eggplants last year between the flea beetles and obscenely hot temperatures that came on fast and settled in for 3 months, so none of the plants produced fruits. Hopefully the floating row cover that I ordered off Ebay will provide protection from the flea beetles at least.

Last year was an ongoing struggle against the local bird population who became a tremendous pest in the vegetable garden. A mild winter combined with a record hot summer left a large bird population. Early on the birds consumed 27 of the 52 baby tomato plants set out whiling topping the rest, the okra starts suffered a similar fate to the tomatoes, and the first planted beans and squash seeds were eaten. Bird netting and fencing stopped the larger of the birds but the smaller ones were still able to get into the garden. The garden never truly recovered from the onslaught.

This year I plan on taking a different tactic. Rather than netting the whole garden against birds, I am going to use floating row covers to protect the plants the vile creatures seem to favor. The floating row cover is said to have the added benefit of excluding vine borer moths, Japanese beetles, cucumber beetles, squash bugs, and flea beetles as long as the critters aren’t already overwintering in the soil. I went ahead and purchased a 25 x 10 feet length of Agribon 15 floating row cover from Ebay. Agribon 15 is said to have a 90% light transmittance and holds heat in very minimally which is useful since I am only planning to use it for pest control rather than frost protection.

This gives me hope for the summer squash and zucchini which I tend to lose early to vine borers and squash bugs. Many people swear by floating row covers as the only surefire method of protecting eggplants from flea beetles and their insatiable appetite for the plants' leaves. Hopefully I will only have to use the covers in the spring to give the plants a head start, otherwise it could be some trouble keeping the garden watered and weeded.
Posted by Phuong at 2:47 AM No comments: