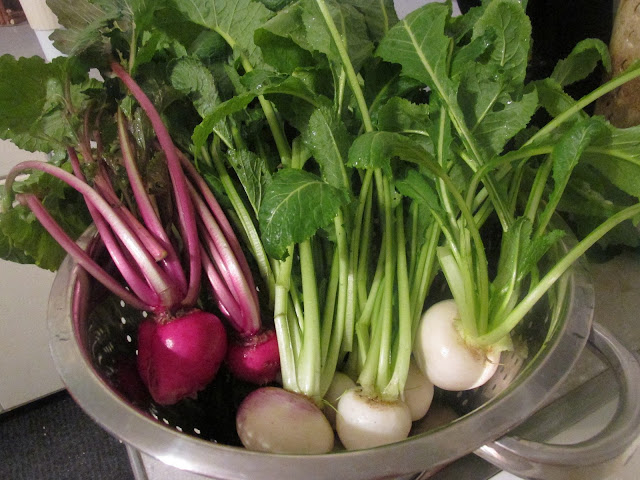 The first turnips were just picked yesterday. The Tsugaru Scarlet turnips on the left are just slightly spicy and somewhat sweet, they would be great in a salad. The white Hakurei turnips to the right are sweeter and even more mild than the scarlet turnips, both would be good on a crudité tray. The Di Milano A Colletto Viola turnips in the center with the faint blush on their shoulders have yet to be tried this year, but they're usually a fairly spicy turnip which cooking tames. 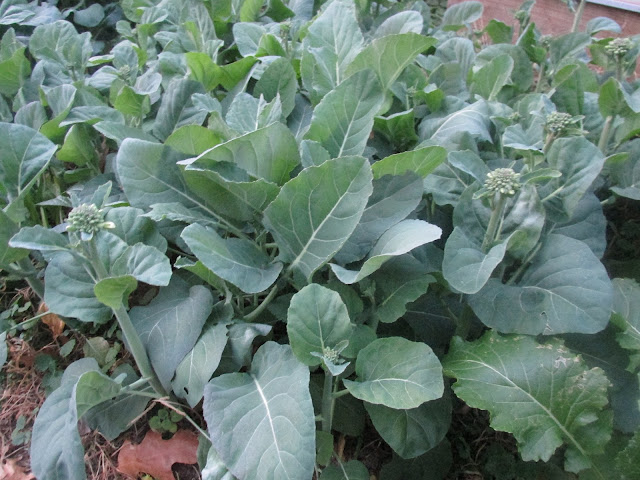 The planting of gailaan or kailaan, otherwise known as Asian broccoli, is heading up well. Their flavor is very much like broccoli and the stems are wonderfully delicious. We've been eating these in soups but they would probably be great blanched and then sautéed with garlic. 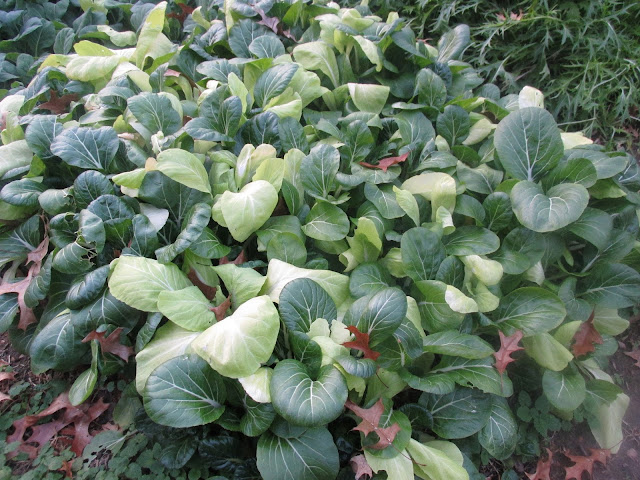 This came from a package of mixed baby leaf pak choi, they're mild and tasty. I've been thinning them but they need to be thinned even further. 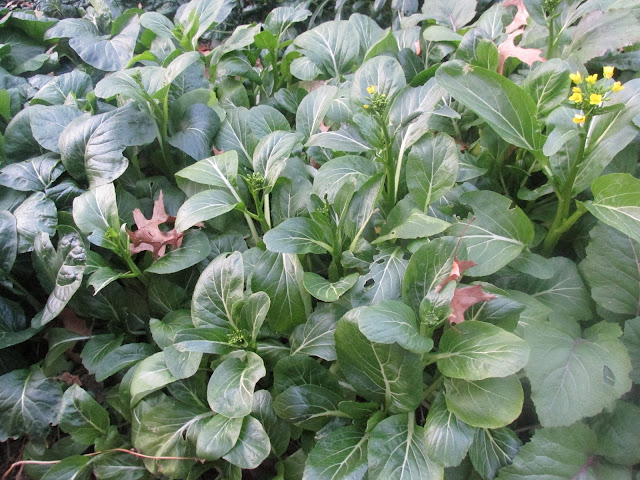 These flowering choy sums were planted much too close together, but with diligent thinning the later heads will get much bigger. The thick stems are juicy and the whole plant is delicious. 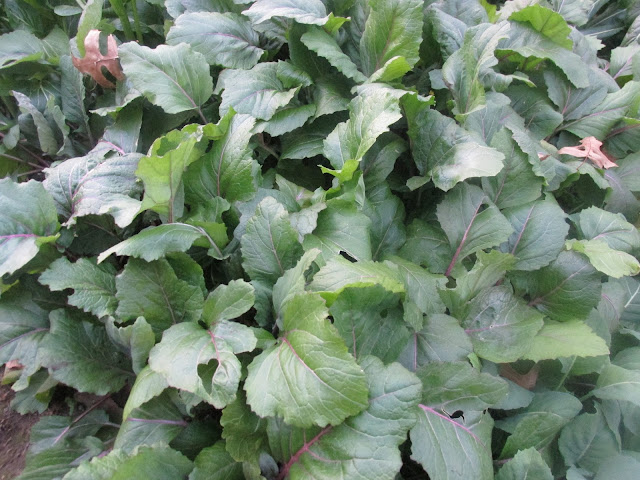 The red stemmed yu choy is also delicious, but it flowers later and so far we've just been eating them as a leafy vegetable in soups. 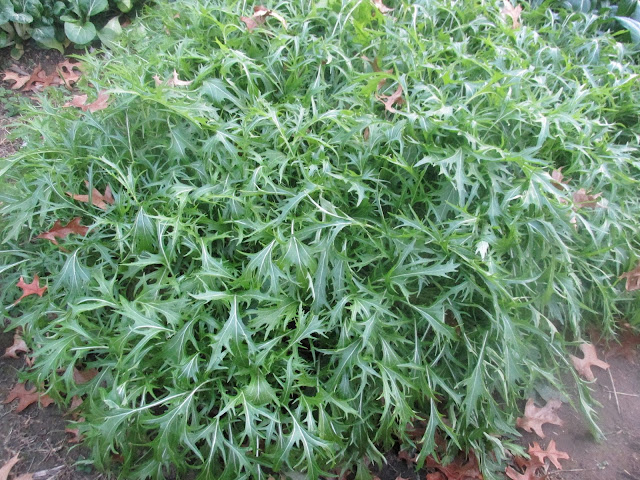 Mizuna is one of my favorite leafy greens, they're mild and delicious and their thin stems are wonderful as well. A lot of our greens are just prepared by sautéing with garlic or onion in a little bit of olive oil, or just added to soups. 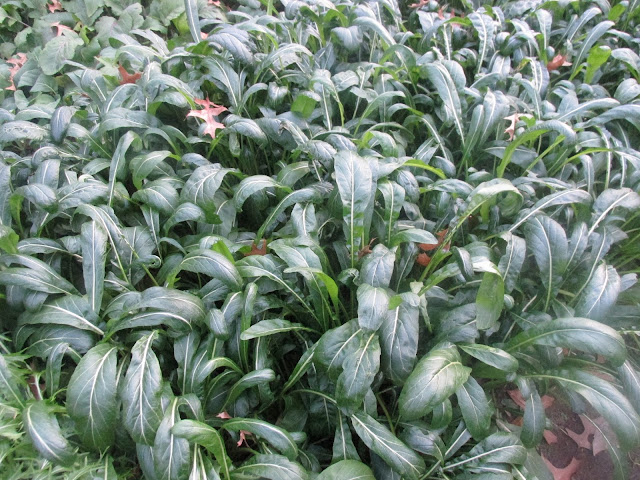 Mibuna is also a fantastic green, it's a lot larger than I would have guessed from internet pictures. It has a different flavor and texture than mizuna, but just as delicious. The upright habit of Mibuna and Mizuna means their leaves keep fairly clean compared to spinach, lettuce, etc. 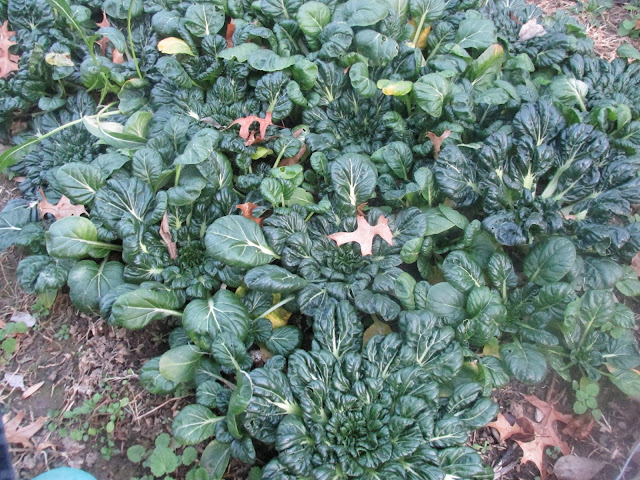 Tatsoi is a lower growing plant with a slightly stronger mustardy flavor than they other greens listed above, but I think they're still a lot milder than most other mustards.

It's usually dark by the time I've finished picking and washing greens, so I didn't get a harvested picture of them this week. I pick about 5 pounds of them once a week, even after washing they keep in the fridge really well.

There's lots of other greens growing in the garden which I haven't harvested with most being in the baby leaf stage. I'll be posting a bit about them in the next day or two.

We've been having light frosts in the upper twenties (-4 degrees Celsius), but are expecting a hard freeze in the low twenties at the end of the week. I'm going to try and cover the carrots, beets, and spinach bed with floating row covers.

Please join us for Harvest Monday hosted by Dave at Our Happy Acres, a place where vegetable garden enthusiasts share what's growing in their gardens.