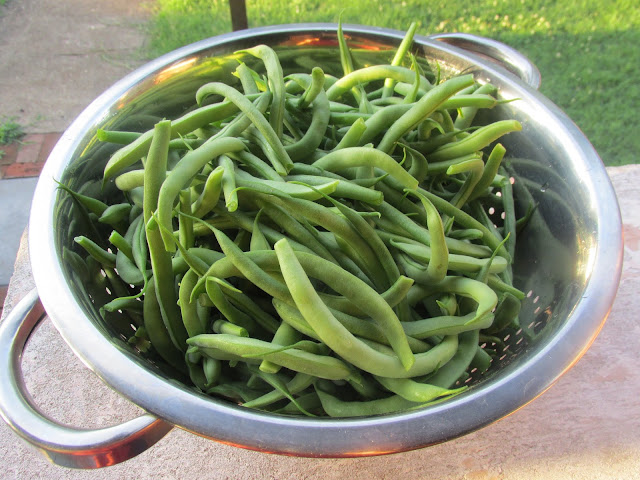 June 25th was the first picking from the bush bean beds. The earliest and most prolific bean so far is Triomphe de Farcy beans, too bad it's the stringiest bean ever. The strings are so tough and difficult to get off they actually make my fingers sore. Thank goodness Landreth's Stringless is making up for it. 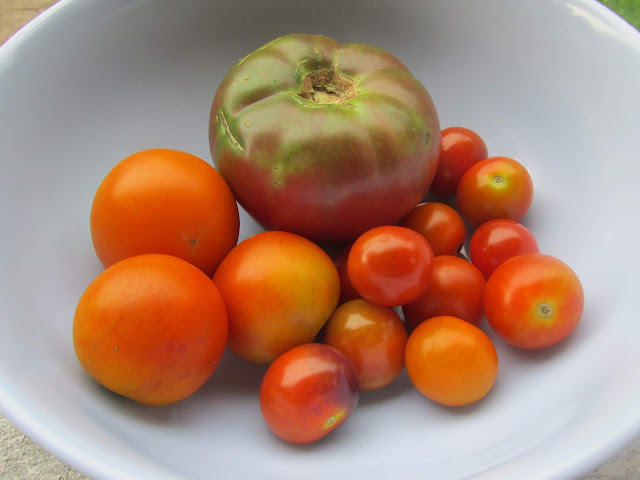 Dark Brandywine is the first large tomato I picked. (Berkley Tie-Dye would've been the first ripe but a critter ate half of it.) On the left are three Jaune Flamme tomatoes, they produce large trusses of fruit. 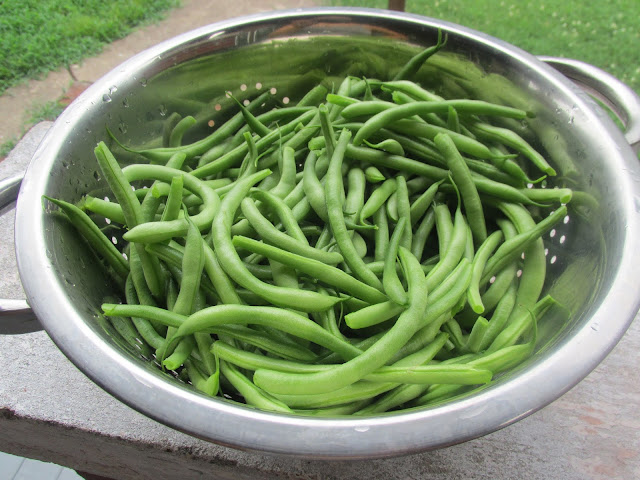 On June 27th I only got half the bush bean bed picked before it threatened to rain again. A mixture of Triomphe de Farcy, Contender, and Tendergreen. 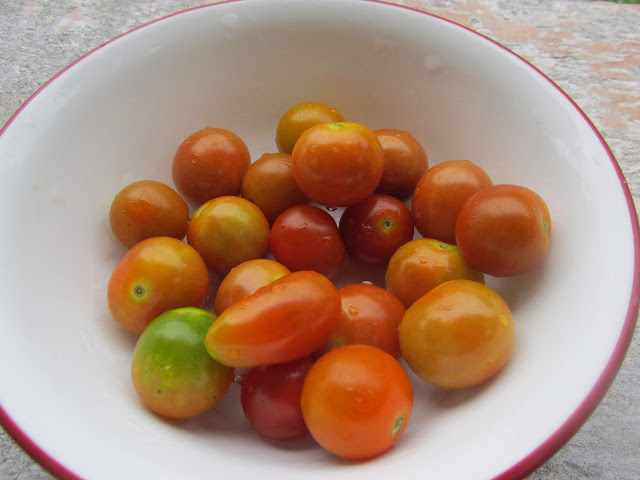 I started picking the tomatoes early just to keep them from splitting too badly with all the rain we'd been getting. 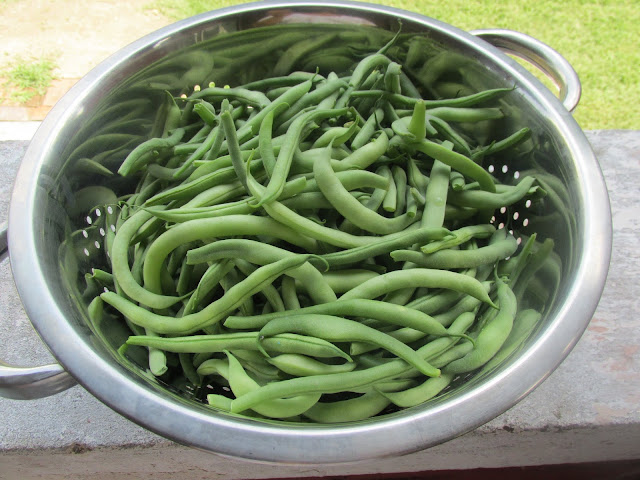 The other half of the bush bean bed got picked on the June 28th. Mostly Landreth's Stringless and Derby. 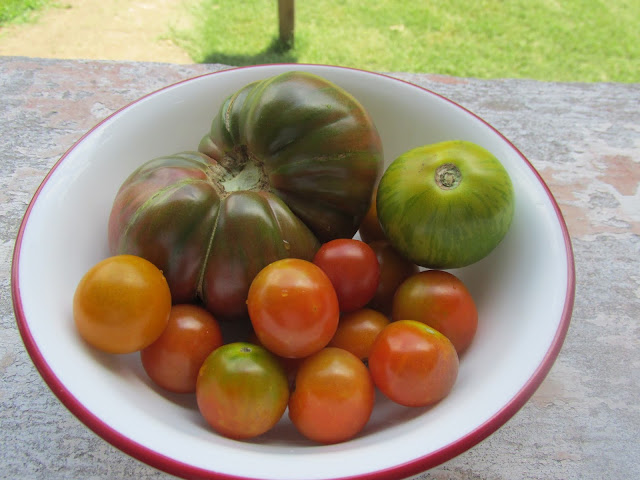 In the back is a Berkley Tie-Dye tomato and a small Green Zebra. 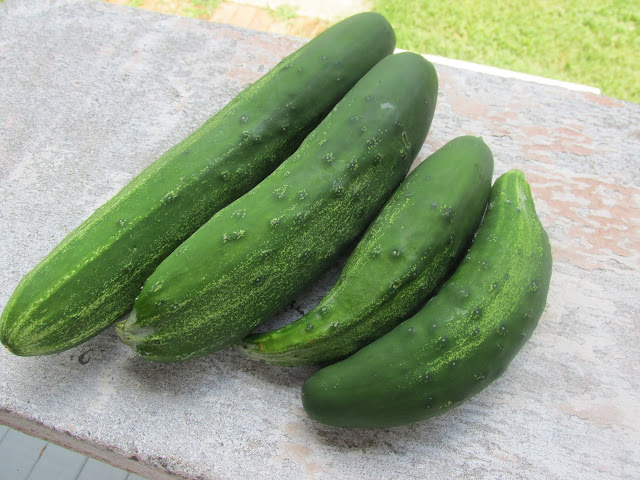 Out of the 4 cucumber varieties I'm growing, only Salad Slicer and Heike have produced. The other two have yet to make female blooms. 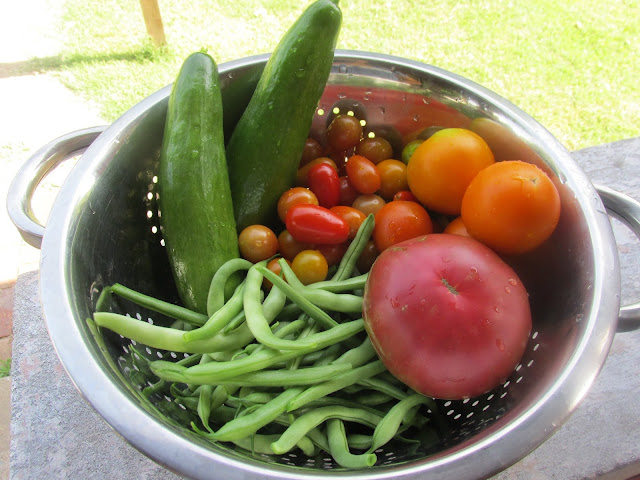 I mad a chicken, onion, and green bean dish yesterday using Aldi's Harissa Simmer Sauce and it was fabulous. Spicy and delicious over a bed of rice with fresh herbs and a dollop of homemade cucumber yogurt sauce. Yum. 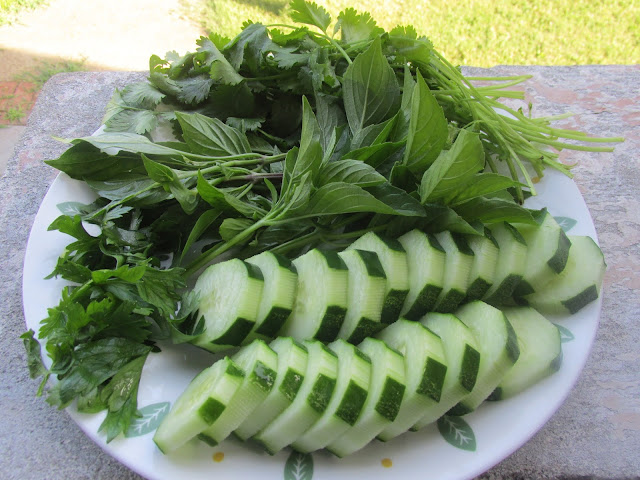 A plate of homegrown Mrs. Burn's Lemon basil, Siam Queen basil, Gigante d'Italia parsley, and cucumbers with some store bought cilantro. This was served with the chicken and green bean harissa sauce dish.

We got 8 days in a row of heavy rainfall. The wind was so bad on June 28th it made me worry about a tornado. Lots of tree damage in the neighborhood and power went out for a little bit. But it looks like that stormy weather pattern has finally broken. All this rain means disease is running rampant in the tomato beds, and half the onions were lost. I've decided I'm done growing onions, it's a lot of work starting them so early in February only to have most of them die or not do well because of the amount of water we tend to get.

The bush bean bed will probably be done in another week or two, Gilfeather turnips will be directly sown in that bed. Broccoli and Brussels sprouts will get planted in the early Buhl sweet corn once it's done in few weeks. It'll probably be late before the Morado corn is finished so fava beans/broad beans probably won't be planted until October or November in those beds.

I might try a planting of peas along the fence in the Buhl corn bed. The only reason I've been able to keep up with the weeding this year is because the kiddo is vacationing with the grandparents. They've been going to the beach and out cherry picking, so lots of fun stuff.

Join us for Harvest Monday hosted by Dave at Our Happy Acres. A place where garden drama unfolds as gardeners share their trials and triumphs, as well as their weekly harvests.
Posted by Phuong at 3:00 AM 13 comments: