A little slug right before he was squished. 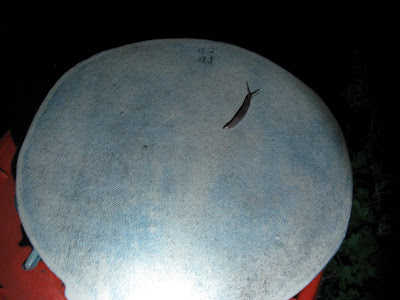 Ugh. So slugs got a few of the eggplant seedlings that were being hardened off outside on the back step. They mostly come out at night. Mostly. And they are not the big juicy slugs found out west. These ones are slender with cute little eye stalks, but they still need to be destroyed. All the Ping Tung eggplant seedlings were eaten as well as the Aswad and Bangladeshi Longs. Here's a link their descriptions from another post. The hardening off process also had a casualty, a single Early Long Purple laid down and gave up the ghost.
I went ahead and replanted the eggplant seeds of the plants that were eaten by the slugs, hopefully the seeds will germinate quickly and the plants get big enough to plant outside in five weeks. But that is cutting it really close. The reason I knew slugs were eating the plants is because I went out at night with a flashlight to check on them and caught the little buggers at it.
Generally slugs are not a problem in this garden. I attribute the lack of slugs to the use of wood ash which is probably hard on their soft bodies. Many people crumble eggshells around their plants along with coffee grounds.
Posted by Phuong at 12:56 AM

Email ThisBlogThis!Share to TwitterShare to FacebookShare to Pinterest
Labels: slug, slugs in the garden

Hmm, yes, slugs! Nasty beasts. Suburban Tomato has recently spoken on her top 5 garden annoyances, which includes slugs. I have just tried to get my last crop of basil up but each night they have been mown by slugs. Hmm, nasty beats.

I hate having to handle the slugs to kill them. Yuck.