The Weedy Garden in June

We planted the garden about a month ago, so I wanted to give a little tour of what's been going on.

It's been a fairly hot summer already with temperatures in the 90's since the end of May. Certain varieties are adversely affected by the unrelenting heat. A few tomato plants that did really well last year are half the size this year, and they're setting less fruit. Namely Cosmonaut Volkov, Peron, Coustralee, Black Krim, and Black Brandywine. 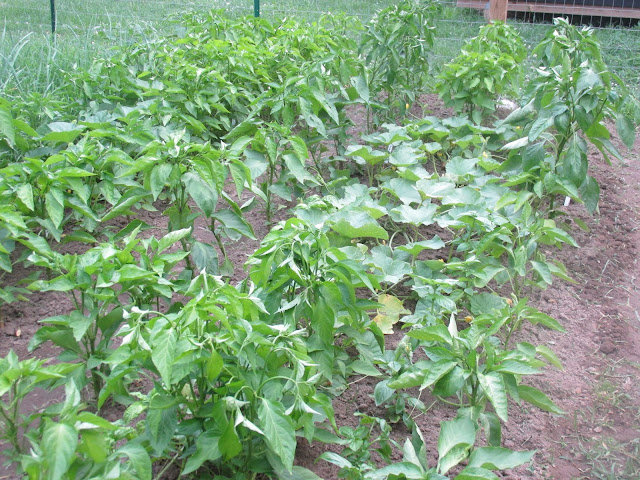 Mostly sweet pepper patch with melons planted in the center. They've just started to bloom but peppers have a hard time setting fruit when nighttime temperatures are high.
The plan is to weed the Morado corn tomorrow after work, and then weed the leeks and onions this weekend. I'll have to spend a lot of time with the leek patch so they don't get accidently get pulled along with the weeds.

I'm having a really hard time getting New Zealand spinach to germinate indoors. I might try using the area that used to house shallots as a seedling bed.

Thank goodness it rained a few days ago. I was hand watering sections of the garden in the morning before work and other parts after work. Which is part of the reason I'm so behind in weeding.

I'll be sharing pics of fruiting vegetables soon. I won't be getting big tomatoes at the end of June like last year, mid July more like.
Posted by Phuong at 9:46 PM

I am totally amazed at how quickly everything is growing. It must be the heat. The cool climate here really slows the pace down but I hadn't realized just what a difference it makes until I see a month's worth of growth in your garden compared to a month's worth here. Wow.

Hi Michelle,
I do think heat speeds everything up. This is especially noticeable with just getting the greenhouse, the seedlings at planting time are 2-3 times larger than the years we didn't have a greenhouse. And all the rain we get probably doesn't hurt either. Even without a greenhouse, on those near perfect years I've had eggplant plants taller than 5 feet by early August.

Ground cherries are something I haven’t heard of before.

Hi Sue,
They're new to me as well. I've seen them in a few seed catalogues and have always been curious. Some people equate them with Cape Gooseberries, but I think they might be different species from the same genus.

Wow! So much growth and so many omato plants. Shame about the shallots, but it looks amazing considering your recent weather!

Hi Belinda,
I rarely take a chance on spring vegetables since it can get so hot here early on. It looks like we might have wilt infecting the tomatoes, which might explain way a few of the plants are much smaller than usual. The strawberries you've been harvesting from your garden are lovely and it's wonderful to see the frogs and critters living at your allotment. I hope rain comes to you soon.