A Tour of the Vegetable Garden in June 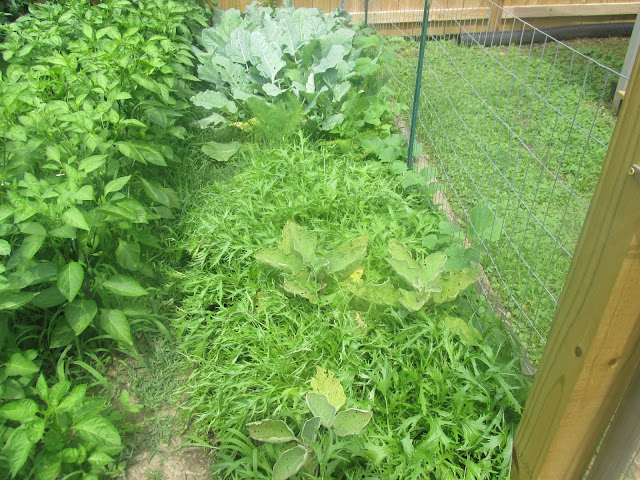 Our shadiest bed is home to Mizuna a leafy green, 3 eggplants ravaged by flea beetles, and kohlrabi. Mizuna and kohlrabi are normally spring vegetables but they're trooping along even with temperatures in the mid 90's (35 degree Celsius). 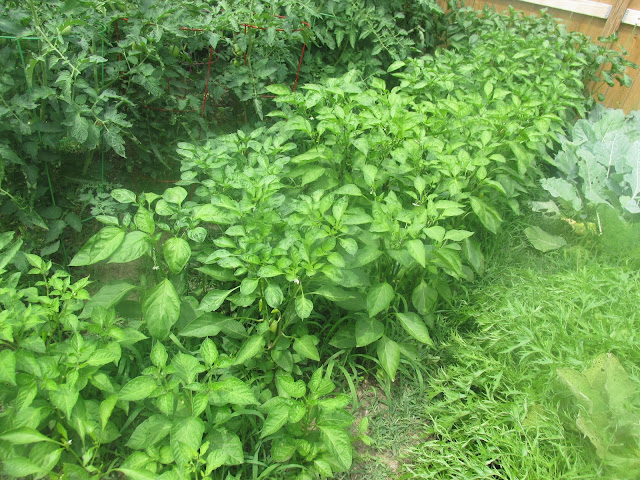 The hot pepper bed needs to be weeded badly, they're high on my list along with the leeks and fennel. The plants next to the wood fence are tall enough they're starting to get a lean to them, so they'll need to be staked soon. There's 42 pepper plants in this bed.

The peppers are a lot taller this year, even the jalapenos and lemon drop are getting to be tall plants. It's might be due to the weather because in hotter years they tend to be shorties, either that or maybe it's because they're spaced closer together. It makes me wonder if the yield will be affected since they're putting more energy into growth rather than fruit production. 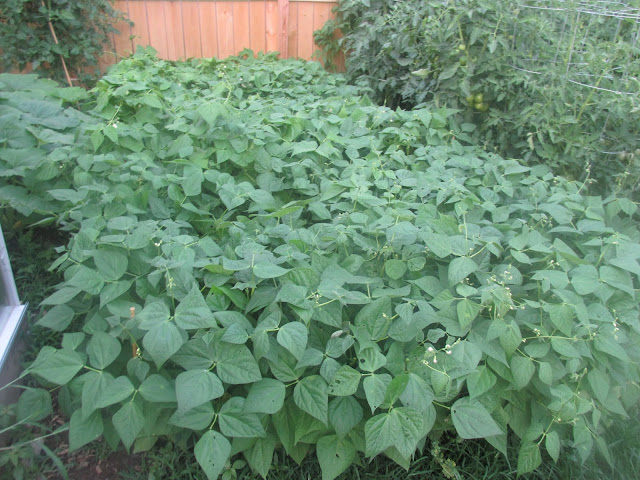 And two bush bean beds have merged into one ginormous bed. You might not be able to tell, but there's a small fence around the bean bed made with 2 foot tall bamboo poles and string to keep them from flopping in the paths . At least the bush beans are starting to bloom, but I wonder how I'll be able to harvest them.

Snap beans are one of my favorite things from the garden. We sauté snap beans in olive oil with onion and long strips of carrot, add a little chicken stock and cook it down till the liquid is absorbed, so good. And of course, they're fantastic in stir fries. 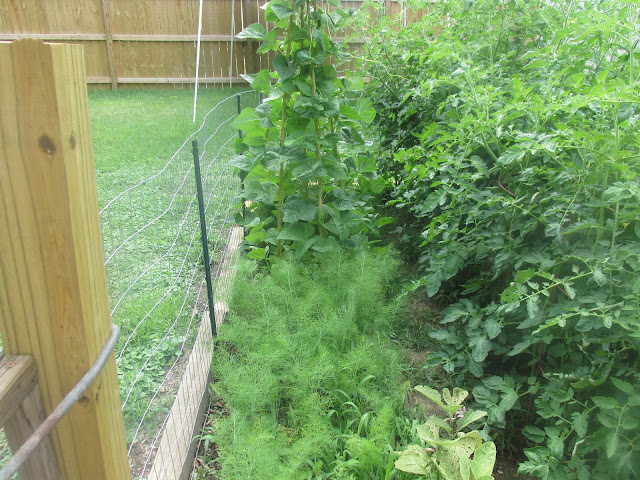 And the fennel which is in another shadier bed is actually starting to bulb. I'm just as shocked as you are. They were so tiny and root bound and it's been so hot lately, but they're still managing to do their thing. There's some pole beans in the back of this bed, and yes that is a wall of Cosmonaut Volkov and Peron tomato plants to the right. 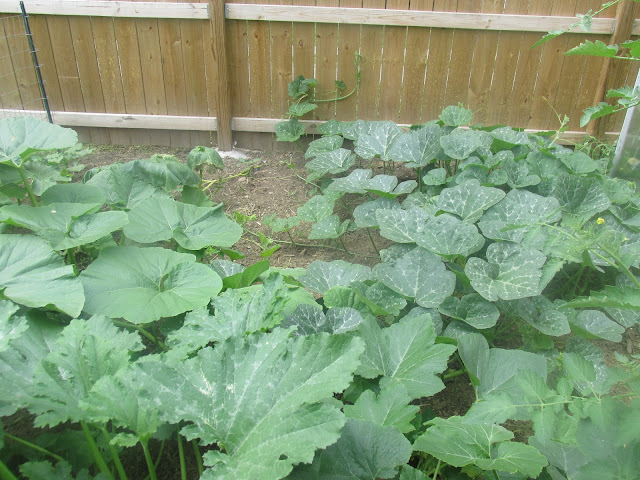 And the winter squash are starting to vine, there's a patch of them on either side of the greenhouse. It's been years since I've grown winter squash and I had forgotten just how massive they truly are. These were planted May 14th, to the left is Queensland Blue and to the right is Thai Rai Kow Tok. In the front are summer squash and zucchini which I use to block the winter squash from traveling into the rest of the garden. 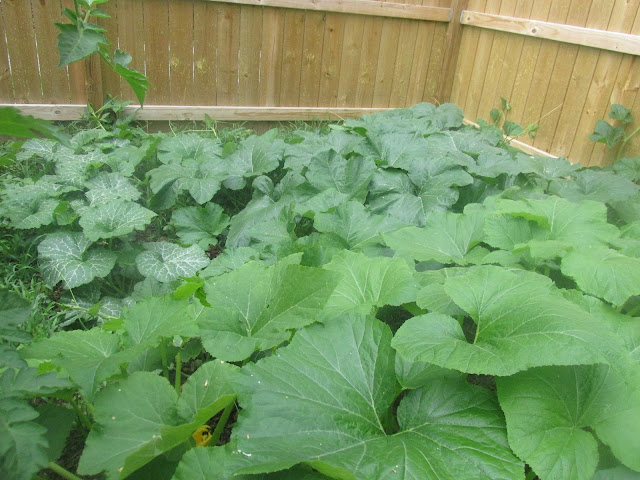 Another winter squash bed with Yokohama to the left, Black Futsu to the right, and summer squash in front. I read a review on Black Futsu where someone harvested 37 squashes from a single plant that was growing in their tomato bed.

This is actually the shadier of the squash beds as some reviews of Yokohama and Black Futsu suggests they prefer a bit of shade. 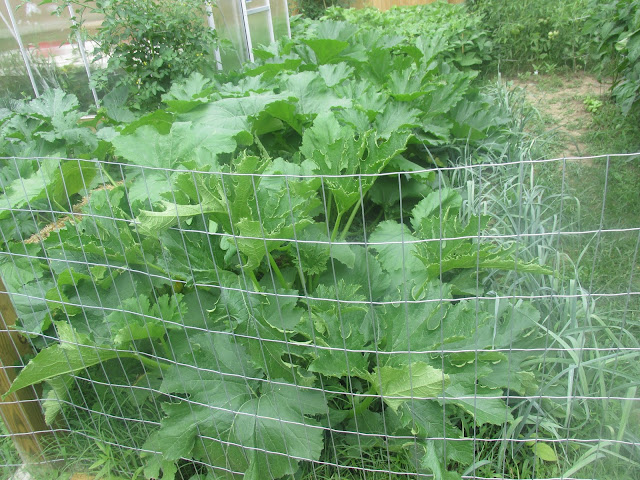 The zucchini and summer squash bed is starting to encroach on the leeks. That's a bale of straw hiding beneath the leaves of the zucchini plants on the left.

I've planted lots of zucchini, patty pan, and summer squashes this year because squash bugs and squash vine borers usually kill or weaken most of the plants. 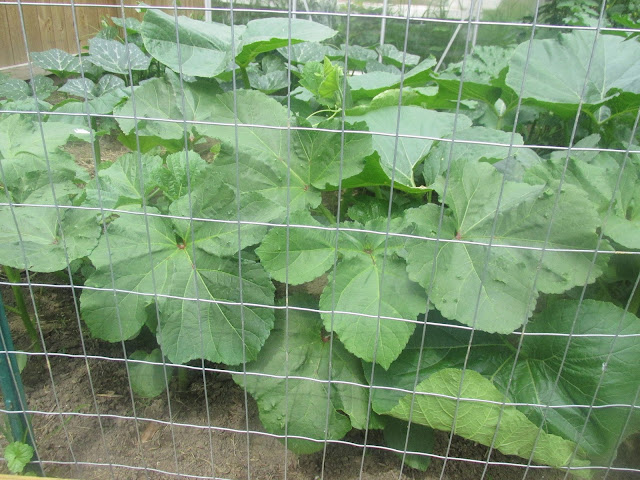 Against the 3 feet tall wire fence is planted a few Beck's Big Buck okra that were planted out as seedlings, the winter squash Queensland Blue is definitely crowding them a bit. 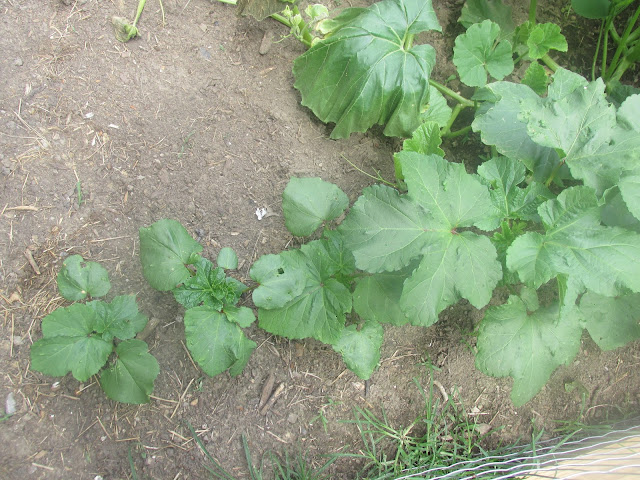 Here's a better picture of the row of okra, the three plants directly seeded on May 19th are still pretty small in comparison and above you can see a wilting vine of winter squash probably hit by a vine borers. 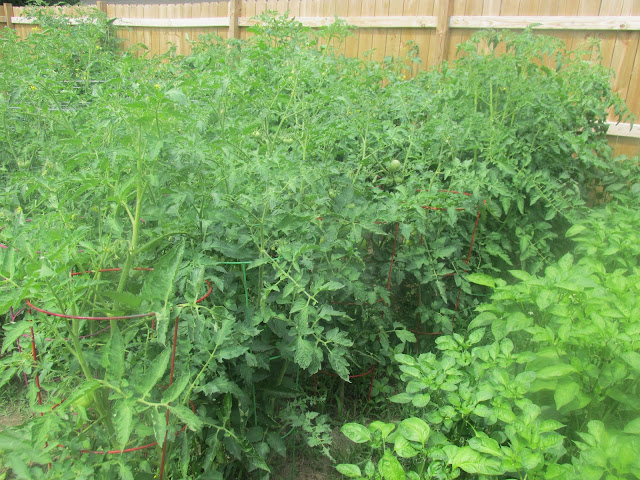 I'm still trying to keep the bottom of the tomato plants trimmed, but they are pretty unruly at this point. Various fungal disease are showing up in 3 of the tomato beds. I've tried spraying with a copper fungicide but will be trying Serenade, an organic control for fungus and bacteria.

I'm starting to suspect tomato speck is my main problem as the stems and fruit are infected as well. I've dug up one Manyel plant and heavily trimmed another of the same variety. It's possible we got some contaminated seeds and then the red tomato aphids are spreading the disease. I've never actually had aphid problems before in all my years in western Kentucky. Usually there are droves of ladybugs but there's only been a handful in the garden this year. 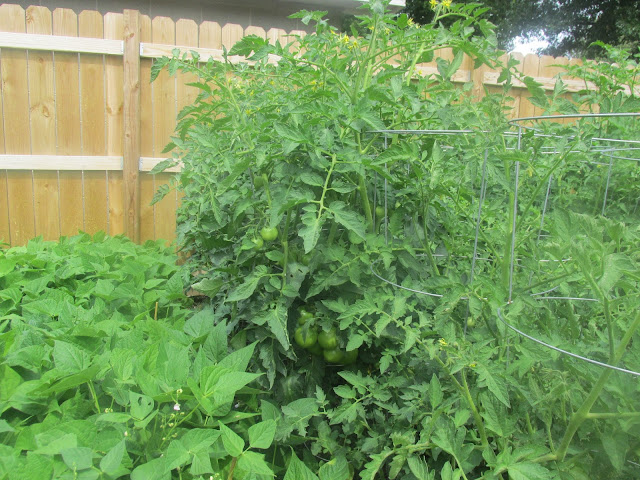 The tall tomato plants in back are supposed to be the determinate Celebrity (F1). They are considered a vigorous determinant or semi-determinant, but still they've grown way above the 54 inch cages. We've had the perfect spring and the plants are bigger than I've ever seen them. 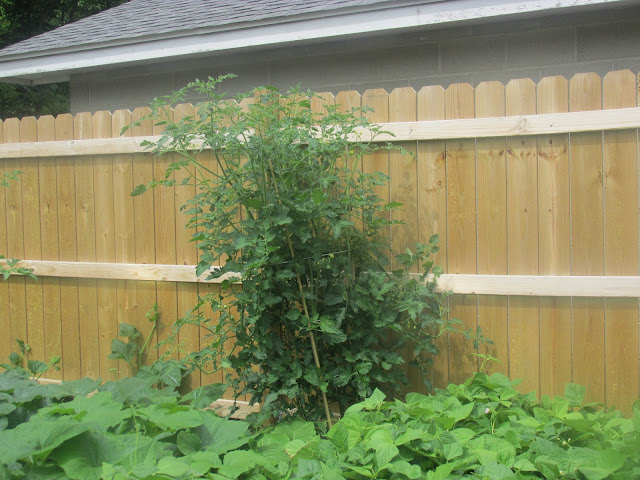 This  Black Cherry tomato plant is taller than the 6 feet wooden fence. I've had to stake the cage with 3 bamboo poles.

I am mildly optimistic even with the diseases traipsing through the garden. It looks like it might be a banner year, which will hopefully be dubbed "The Year of the Tomato". I've taken a week off at the end of July with the hope of canning lots and lots of salsa.

The weather cooled off Saturday, so I actually got some weeding done for the leeks and peppers. Hopefully I can finish weeding the peppers, fennel, and winter squash beds before it rains Sunday afternoon.

And interestingly enough, something is parasitizing the aphids. I usually squash them with gloved fingers when I find them, but lately I've been finding their little tan mummified bodies with no young juicy ones in site.
Posted by Phuong at 6:00 AM

Your garden is looking phenomenal - I think the garden stars have really aligned for you this year!

Quite frankly, I think having a disease/pest free year is impossible - some years, however, are much better than others and that's all we can realistically hope for.

Hi Margaret,
I'm trying not to be too hopeful because anything can happen before harvest time but looks promising.

It's awful the rabbits actually ate your big pepper plants, hopefully you got them out of there. And everything should really speed up since it's warmer.

Everything is looking great. Wouldn't it be ironic if the year when you grow more plants to combat the pests is a year when the pests are less troublesome.

Hi Sue,
That would​ be hilarious, between all the summer squash and zucchini there's probably 18 plants. Although interestingly enough, this year is the first for green tomato stink bugs and tomato aphids. But in all honesty I worry more about squirrels than bugs when it comes to tomatoes.