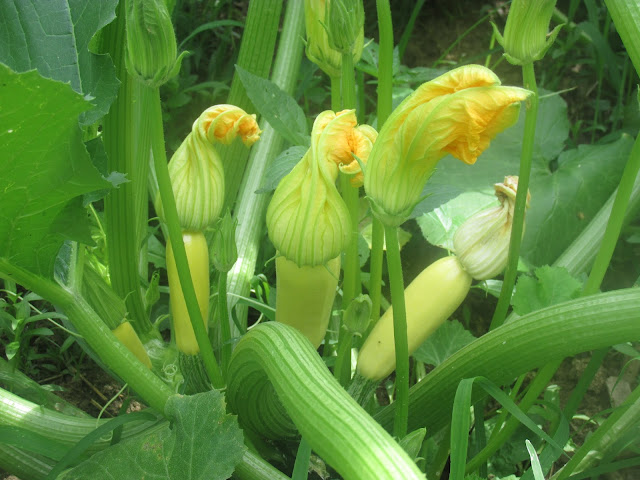 Butta (F1) zucchini. I've already picked a few un-pollinated fruits but it looks like the first male flowers are starting to show up. I grow lots of hybrids and open pollinated zucchini and summer squashes because of the high insect pressure in my garden. I've already squished a few squash bugs and it's early in the season. 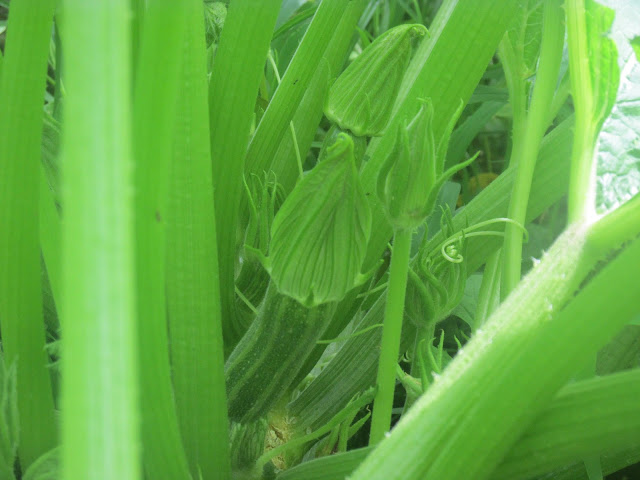 Striata D'Italia zucchini. I can't wait to start eating them. First up will be a curry stir fry with soba noodles and tofu. 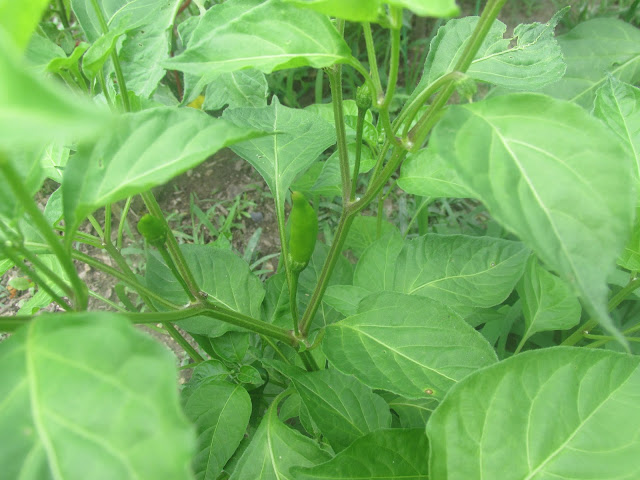 Lemon drop hot chili pepper. They didn't produce for me last year, but it was a blazing hot year with the heat hitting us by the end of May. We're only growing hot peppers this year for salsa. 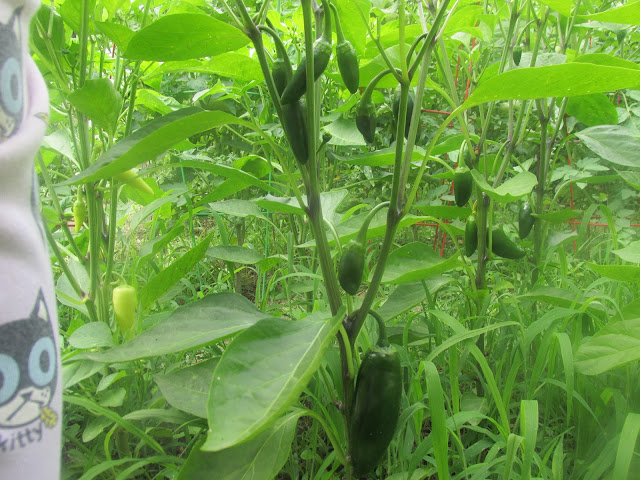 The jalapenos were the first to set fruit and to the left you can see the very pale fruit of Santa Fe Grande. (And now you know I was out taking pictures at 5 am in my pajamas.) 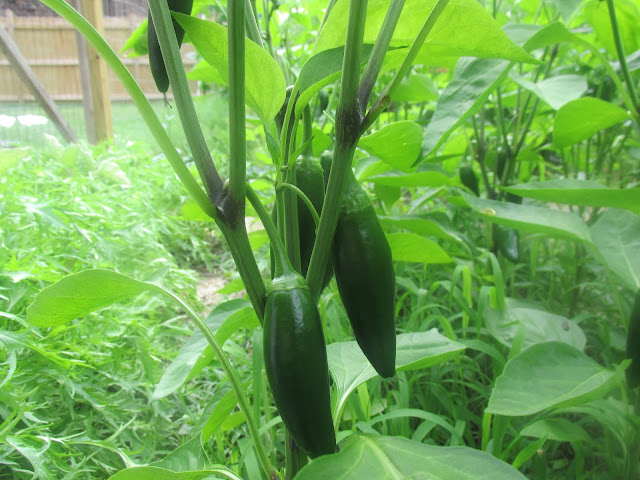 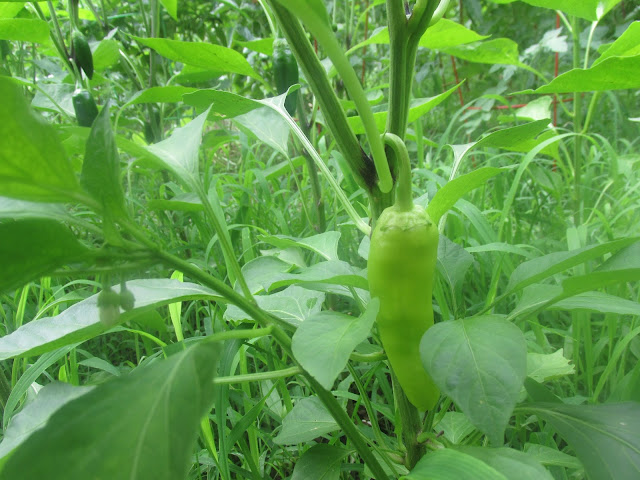 Hungarian Hot Wax is a thin walled pepper, and I think they're great in salsa. I was only able to get one plant to germinate this year. 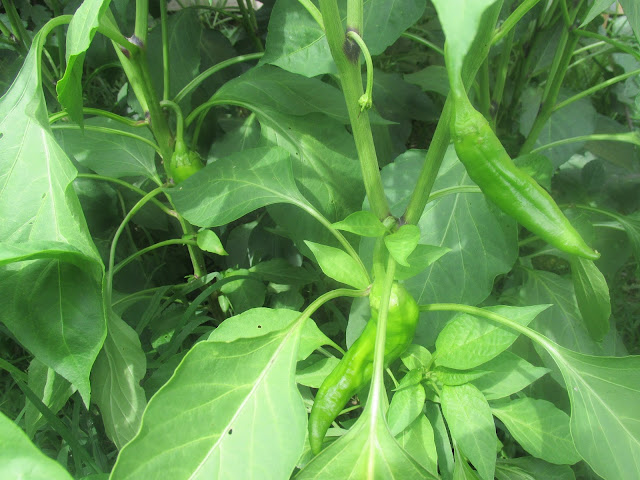 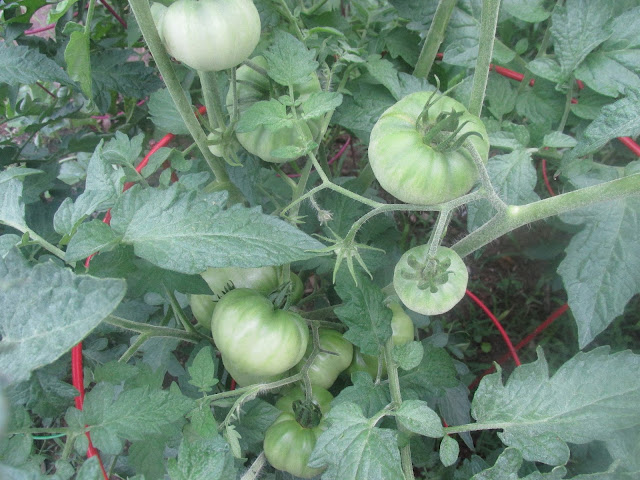 Ananas Noire is setting fruit later than previous years, but it's setting lots of them. 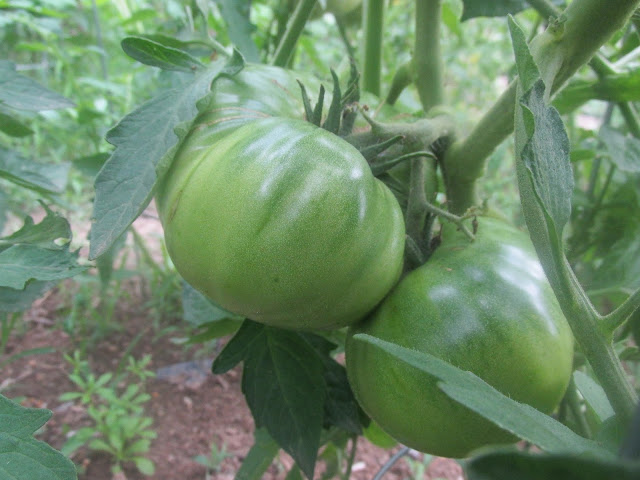 Paul Robeson produces purple black tomatoes. They're a lot larger this year with our milder spring, we've had hot springs where their fruit are small but early. In 2013 they were the first to ripen on July 2nd after planting the last week of April. 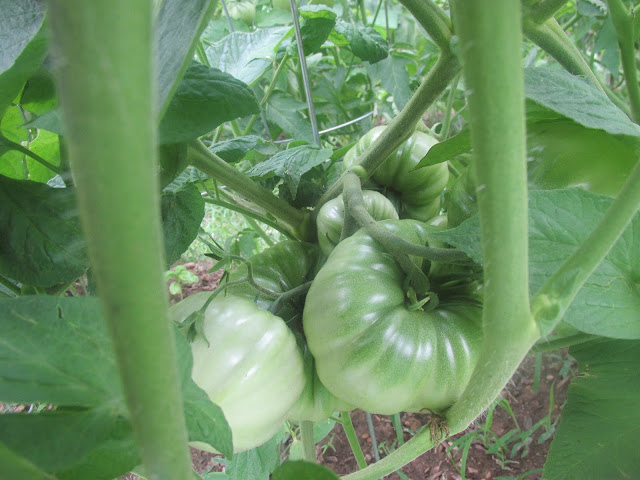 Brandywine is making some nice trusses of their very large tomatoes. They're still blooming profusely but I've picked off a few yellowing leaves that might be a sign of magnesium deficiency. 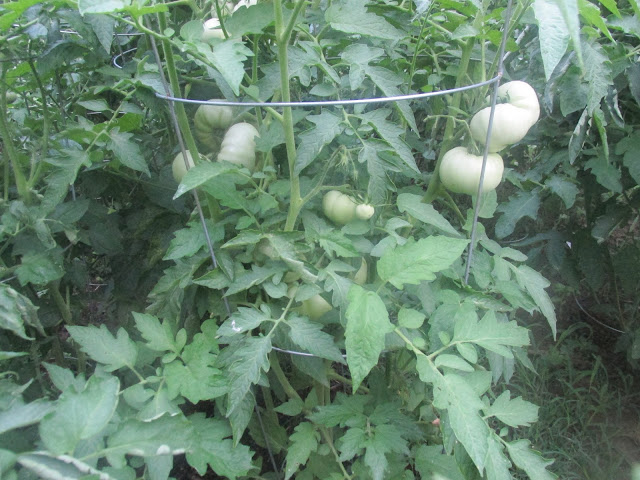 This is the first year Granny Cantrell's German Red has done well for us, they start out a pale green almost white with pretty fluted edges. 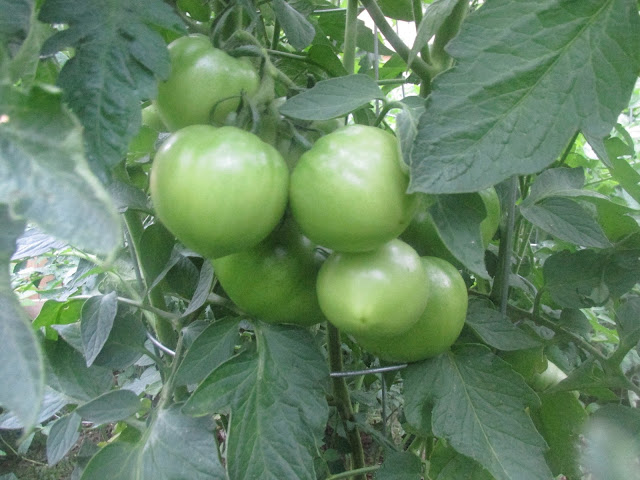 Celebrity (F1) hybrid is a monster of a plant this year. A semi-determinant they have large trusses of fruit. I've been growing this off and on for almost 20 years and find them dependable. 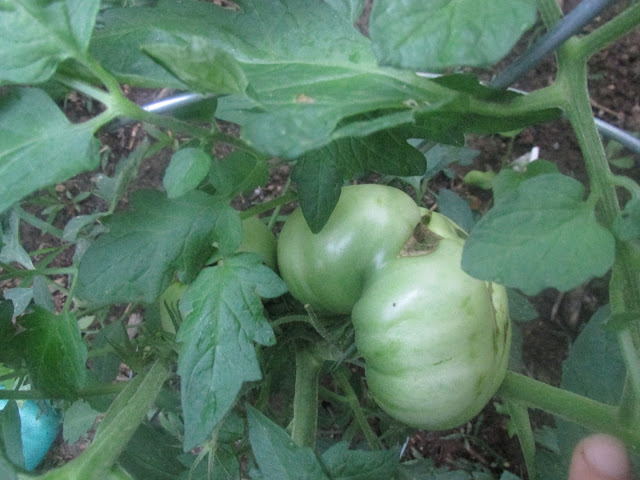 The first fruit on Cherokee Purple usually end up being a bit deformed, the plants are slow growing and fairly short but they can produce over a long season and do end up being big heavy plants in the end. We've had a drier than usual spring, but one big rain can ruin ripening fruit as they seem pretty sensitive to high water loads. 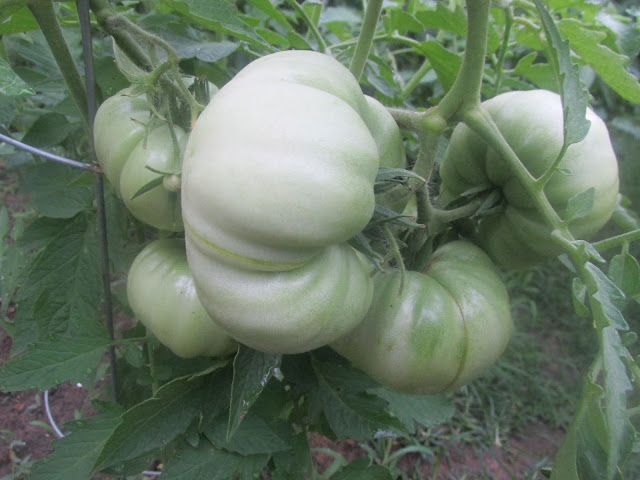 Pilcer Vesy is a large yellow fruited variety. I remember them being great on BLT sandwiches, if memory serves correctly. 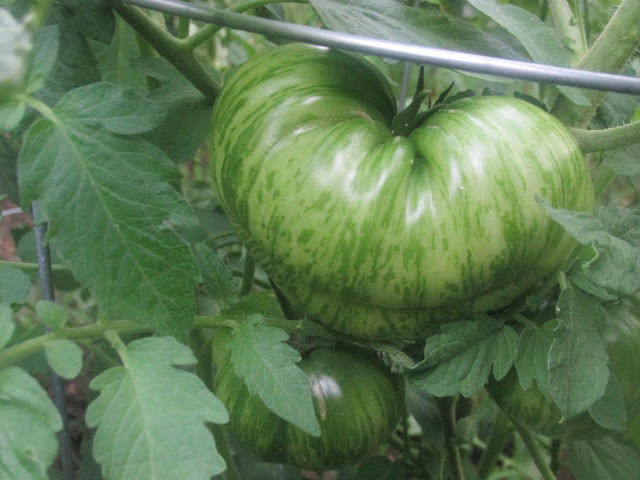 And Pink Berkley Tie-Dye is a gorgeously striped and very tasty tomato. I do think they prefer it a bit hotter since they're not fruiting as prolifically as previous years. For an indeterminate, the plants are smaller but they produce early for a big tomato.

I'm trying to not get my hopes up because the last couple years have been terrible for tomatoes. Just a few bad storms can ruin a crop. And squirrels. But so far, it's looking pretty good.

There's still lingering affects of what I suspect is weed killer carried on the wind, especially on the Dark Brandywine, Black Brandywine, and Yellow Brandywine tomato varieties which are closer to that side of the garden. A coworker told me I might as well pull them up as they won't produce. But the new side-shoots seem to be more normal looking, so I'll leave them be.

I'll be posting a tour of the garden tomorrow. Bite my knuckle, but I haven't weeded as I should. Most of my extra time in the garden is spent trimming leaves that are infected with some kind of disease, perhaps fungal.
Posted by Phuong at 9:48 PM

Don't some tomatoes have strange names. You have a good selection. We limited our varieties this year.

Hi! Visiting you from Margaret! I just have a courtyard garden but am having an awful time with my beans. Think it is aphids. Nancy

Hi Sue,
Some of their names are incredibly long, so funny. We're also growing a green variety Aunt Ruby's German Green but it is incredibly late, they're giant tall plants that are just starting to bloom and set fruit.

Hi Nancy,
Aphids can be terrible and they're so good at hiding. I might have to spray some spinosad, which is organic, on all the tomato plants because I'm starting to suspect aphids are spreading diseases around.

Any NuMex is favorite of mine, best was 6-4 which I can't find anymore, then Big Jim was/is great, but Joe E. Parker produced poorly. I finally pulled my squashes yesterday, two foot long vines/stems with NO male flowers. The unpollinated ones didn't taste very good. Bitter.

Everything in your garden looks amazing! You are so far ahead of me - my squash plants barely have their 2nd set of leaves and the tomato plants are still tiny with only one having some flowers (which I'm surprised at since it's not even 20" tall yet).

Taking photos at 5am in your pygamas - love it! Now THAT'S dedication! :)

Hi Jane,
That's so strange that your huge squash vines had no male flowers forming. Were they all from the same variety? But I agree, pull them especially since it's so early in the season you can always plant more.

Hi Margaret,
But squashes grow so fast once they get their true sets of leaves. Mine were just direct seeded about a month ago and now they're ginormous. It's actually supposed to rain tomorrow so I've been trying to get some weeding done before then.