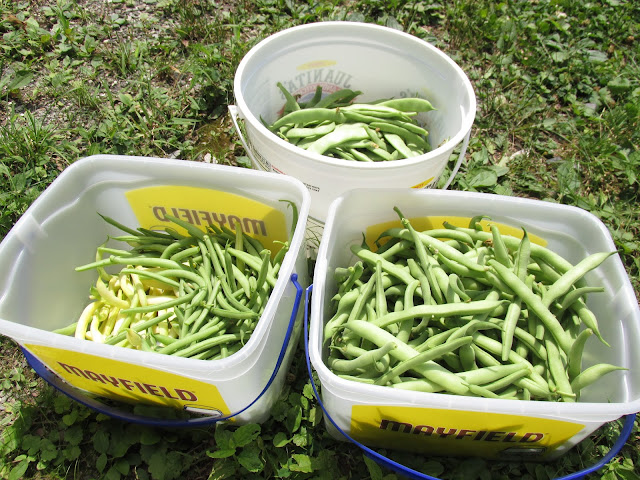 The first picking from the bush snap bean bed gave us 4.57 pounds of beans (2.07 kg). Not much for a 25-30 foot long bed but there was sparse germination in a couple of rows with just 10 plants or less germinating, and only one full row of beans. 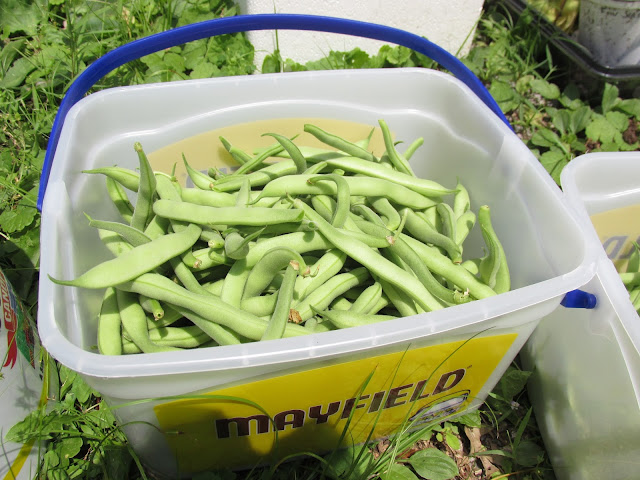 Tendergreen Improved bush beans produced 2.142 pounds of beans (0.97 kg). They had the most plants germinate by far, Pinetree seed company is very generous with their bean seed packets. 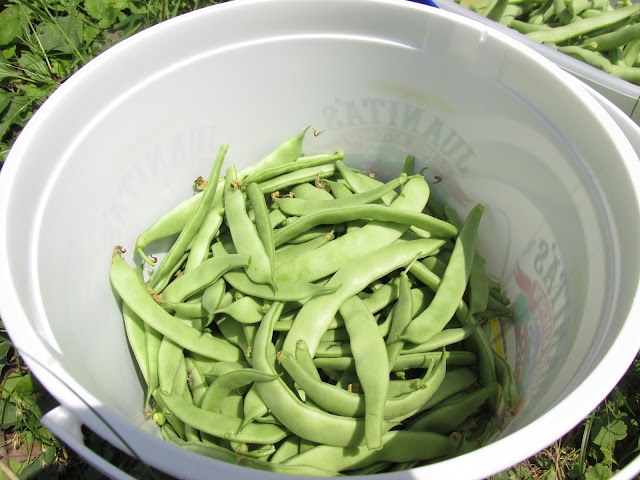 Roma II bush beans produced 1.444 pounds of snap beans (0.66 kg). Baker Creek seed company only includes 40-60 seeds in their packet, they germinated really well but our very wet spring caused some of their stems to collapse at soil level and those plants died. This bucket is actually much bigger than the others, so there's more beans than it looks. 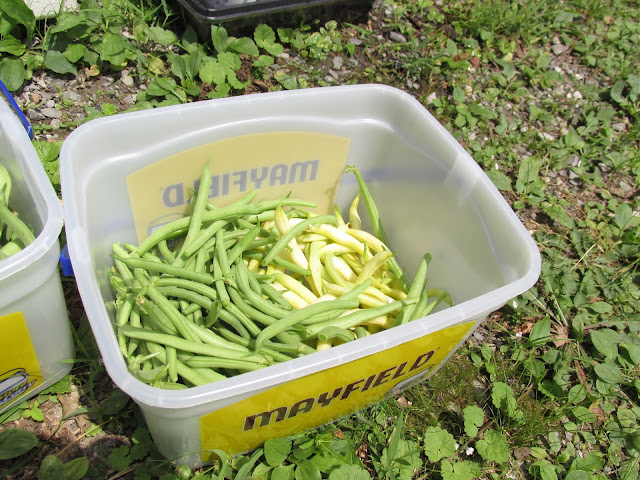 I planted one of those 20 cent packets of yellow Cherokee Wax beans that had maybe 10 seeds in them. Those very few plants produced a good number of beans. I've grown this variety before in the desert with sandy soil and the bean pods were dry and tiny. These beans look much bigger and seemed juicy when I was picking them. The green bean pods in this bucket are a mixture of Strike and Jade bush beans which were in rows that I planted much too deep for clay soil and there was sparse germination. Strike and Jade seem to be later producing plants or maybe they just produce much more slender beans, the plants were loaded but it felt like a lot of work for fewer weight-wise beans. I left a lot of the beans on these bushes to see if they would fill out more. We got 0.984 pounds from these 3 varieties.

I like to grow bush beans because they produce about a month ahead of pole beans. But they are a lot of work to pick. It took an hour of furious picking while stooping down to get 4.57 pounds of beans.
Posted by Phuong at 12:08 AM

Look at those lovely beans! Nice info on the seeds and where they came from. I have planted seeds from the 20 cent seed packages from WM several times, they have done well for me too. As a rule I don't grow a lot of beans, but I like to grow pole too when I do. The bush ones as you say are rough picking. :O)

Hi Texan,
Those little 20 cent seed packets are a lot of fun, they're great for experimenting and trying new varieties and they're actually a good number of seeds for the money.

Green beans are one of my favorite vegetables. They're so good sauteed with long matchstick carrots and onion with a little water in the beginning and then cooked till they're nice and caramelized. Mmmm.

I've always liked pole beans because they crop for longer. And I don't have to bend over to pick as much. And the beans don't get dirty. But bush beans are a lot less work as they don't need a trellis. Sadly I can't eat legumes, but I grow some anyway for my townhouse mates.

Hi Daphne,
I do like growing pole beans because of the ease of picking. And putting up the trellis wouldn't have been so bad if the plants hadn't gotten away from me. I actually finished stringing up the trellis this morning after working on it here and there for two weeks.

It's really nice of you to grow beans for your neighbors even though you can't enjoy them yourself.

I prefer pole beans as well for the same reasons Daphne stated, but always grow a small section of bush beans. I have found that they produce quite a bit for the space they use. Last year I grew Contender (a green snap bean) and even though the harvest was cut short as all of my plants became infected with bacterial brown spot, I harvested over 4 lbs from a 12 sq. foot spot.

Great bean harvest. You are lucky to get a crop given your weather earlier. Jade is a great bean but is finicky, does germinate 2 weeks later than Provider and starts cropping 2 weeks later. The beans are long and slender without being as small as a French filet, so I like them for a change. Not growing bush beans this year because the 4 pole varieties I have will give me all I need.

Hi Margaret,
4 pounds of snap beans from a 12 sq. foot spot is really good especially when you had problems with bacterial spot.

I usually grow a big bed of bush beans which is then transitioned to fall crops once the beans are finished. Brussels sprouts are already planted at the edge of the bean bed, I wasn't sure when to start them because around here our fall months extend into November.

Hi David,
It's interesting that your replacing your bush beans with just pole varieties. I noticed that Franchi seed company in the US offers a romano type pole bean that people were saying cropped as early as their bush beans. If that's the case, I would just go to pole beans.