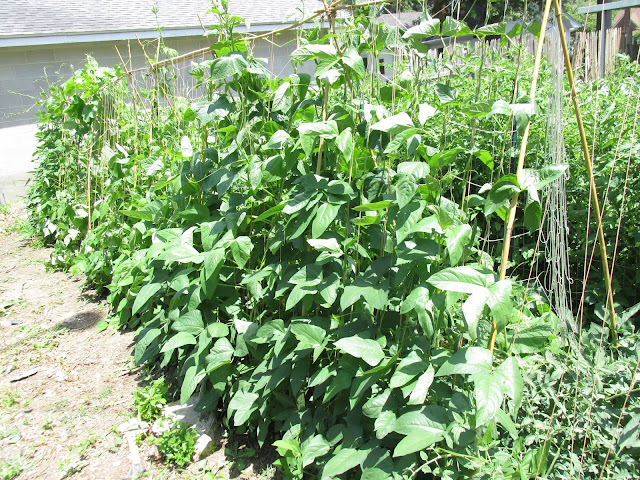 I finally finished trellising the 25-30 foot row of pole beans on Thursday, the 25th. It only took a week of lacing brown string between top and bottom bamboo poles and untangling pole bean vines. The yard-long asparagus beans were knee high when I began but by the end of the week they're reaching the almost 6 feet tall posts. They must be loving the heat and humidity.

The other pole beans were so much longer and took forever to untangle. Hours upon hours. Heat upon heat. 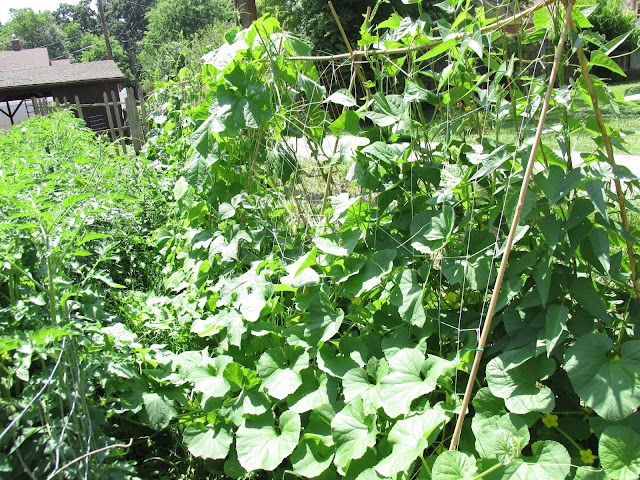 In comparison this side of the trellis (which I actually did first) containing melons, cucumbers, loofa, and bitter melon was so much easier to trellis. It only took 2-3 days which included setting up the bamboo structure, zip tying netting to the bamboo posts, detangling vines and trying to get tendrils to attach to the netting.

All in all it took a week and a half of work in ninety-some degree weather. Our yard backs up to a shared alley, so there were lots of witnesses to me sweating up a storm mostly neighbors and passersby. Even a work crew with a big machine scraping weeds growing in the alley and the men later laying down new gravel. Ah well. Life goes on.
Posted by Phuong at 2:00 AM

It looks good now after all that work. I think I'll have to get my cucumber trellis in over the next couple of days. The plants are thinking about starting to run. I've done that whole detangle the plants thing before, but would like to avoid it.

Great job with the trellis! I feel your pain, especially having to work out there in the 90+ heat - I rarely last more than 20 or 30 minutes outside in that type of heat.

Hi Daphne,
Thanks, I'm surprised it looks so good but it was worth it. Once those cucumbers decide to vine, they just go crazy. I really like your trellis, do you have to coax the cucumbers to grasp the vertical string in the beginning?

Hi Margaret,
Thank you, I couldn't believe how much work it took. I actually got dizzy a few times standing up after crouching, the high humidity combined with heat is just awful.