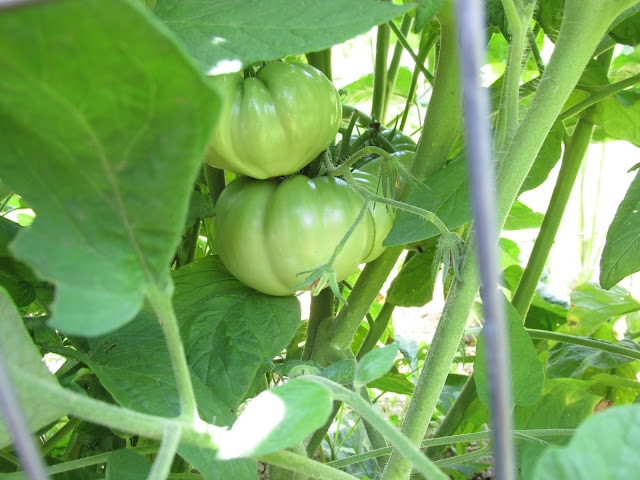 Pink Brandywine tomatoes starting to lighten up in color signaling the achingly slow descent towards ripeness. 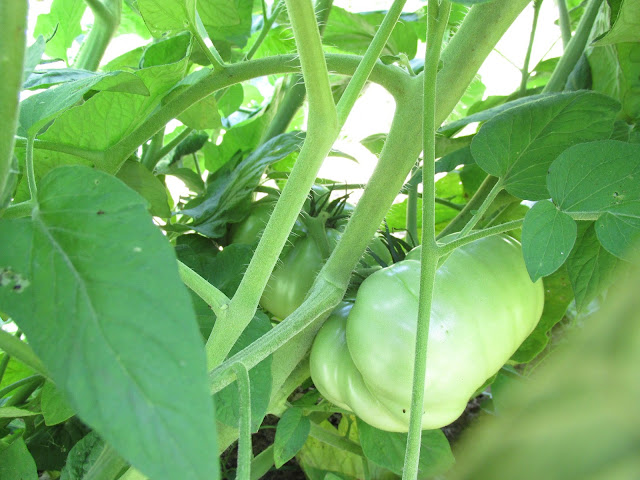 The Red Brandywine tomato in the front has a strange blossom end that they call catface which gives it a more flattened shape since the bottom end is covered with a corky brown scar. Normally cold temperatures is attributed to catface but I've also heard people say removing the flower petals can keep some of the scarring from occurring. There's probably lots of causes for catfacing tomatoes but in my experience Brandywine usually never forms catfaced fruit. With our very wet spring I had dozens of little green tomatoes crack open because of the large influx of water, it was so bad they looked like their skin had pulled away from their flesh but really the insides swelled to the point your could see large sections of seeds forming in the seed hollow. I had tried to pull off as many unsightly fruits as possible but a few must have been missed. 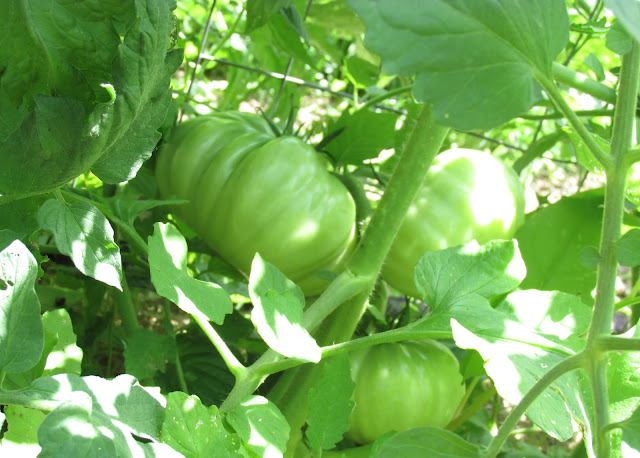 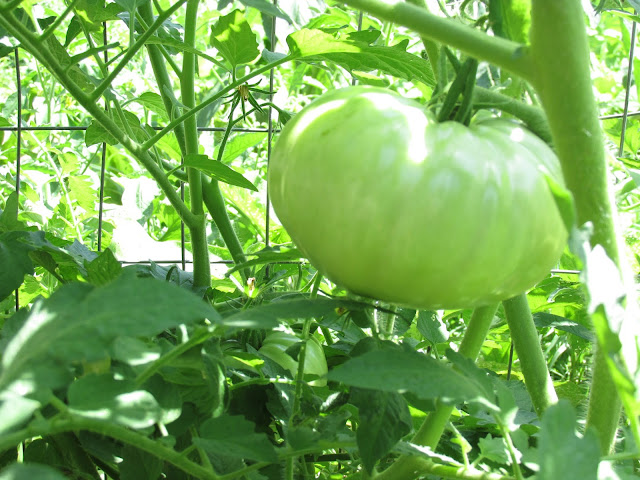 Here's a close up of another Yoder's German Yellow tomato. Since I mostly grow indeterminate tomato vines all the plants are still producing lots of blooms that seem to be setting a good number of tiny tomatoes. 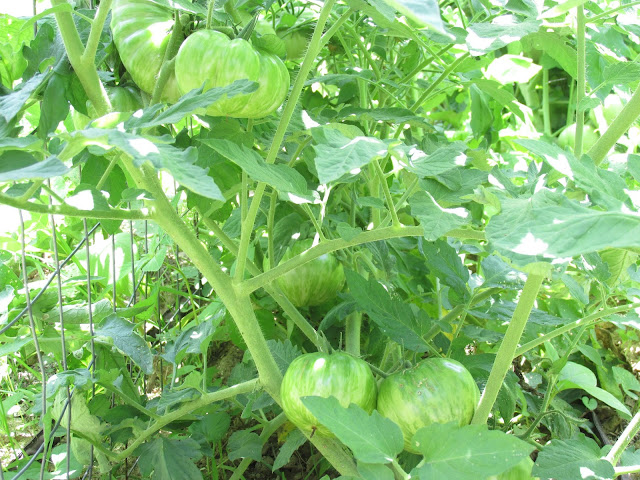 The Pink Berkley Tie-Dye tomatoes are starting to develop their pretty green striations. 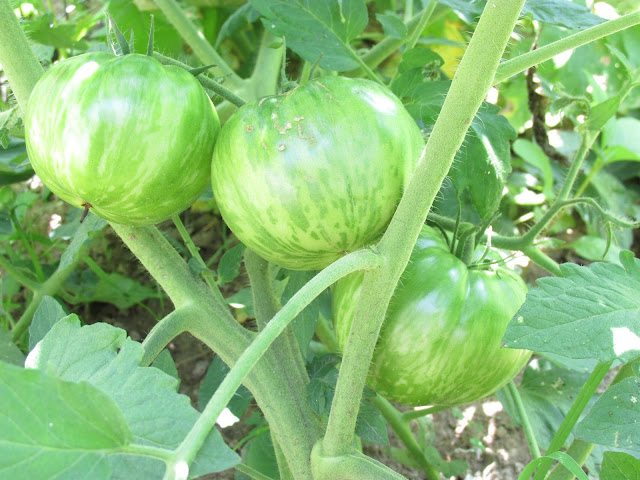 As the Pink Berkley Tie-Dye tomatoes ripen their flesh will darken to a dusky pink while keeping their lovely green streaking. 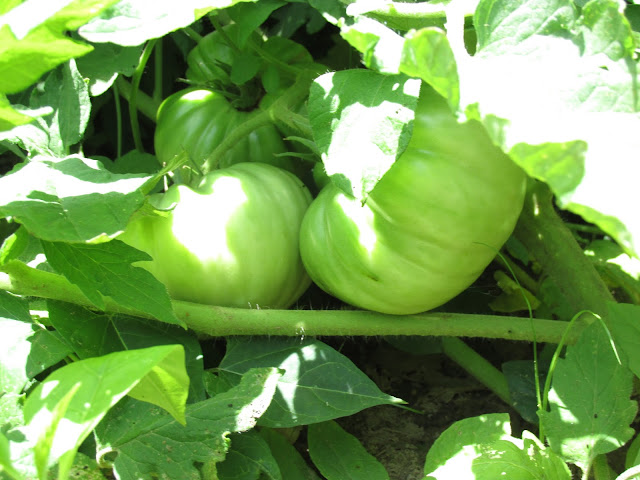 Kellogg's Breakfast tomatoes nestled beneath the leaves. From googling this variety I noticed the fruits are usually orange but I remember them as being yellow when I grew them in 2013. 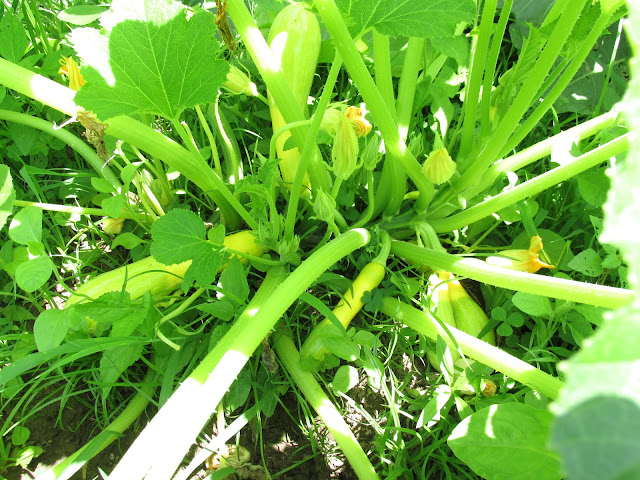 Interestingly the hybrid Zephyr squash female blooms mature before the male blooms. So there were a few unpollinated dead baby squashes. This squash plant isn't actually that large yet, not like those behemoth zucchini plants towards the end of the season, but it's still managing to set a good number of fruit. I went ahead and picked the larger squashes to the left and top since it will be awhile before I can make it out to the garden again.

There have been a few harvests from the garden just broccoli, snap green beans, and summer squash. I'm looking forward to the first BLT sandwiches.

It's only June the first month of summer, but in just a couple of months summer will be over.

I'm  hoping this year to let the tomatoes ripen into the fall so I can get a true accounting of total tomato harvested per variety. But that likely can't happen if I want a fall garden. I'm envisioning fall carrots, winter radishes, salad turnips, big swaths of lettuce, spinach, and a couple beds of over-wintering fava broad beans. Timing is essential. I've only ever ended up with lush beds of lettuce, over-wintering fava beans, and radishes that grow and grow and grow while staying mild and nice and crispy during our long fall.
Posted by Phuong at 11:02 AM

My squash are still tiny compared to yours. I have them under a row cover right now, but I'll have to remove it soon as it is getting bigger.

Hi Daphne,
I had to re-sow squash seeds due to sparse germination and doggy damage. But the early sowing got the benefit of all the rain and the first harvest was exactly 48 days from seeding. Didn't you end up having a very dry month with little rain?

Your spring harvests have been so amazing, and with the transition to summer it looks like you're harvesting a huge variety of vegetables and fruits.

Your tomatoes are really getting there. I'm still at the early flowering stage so have quite a ways to go. I know what you mean about waiting for them to ripen. It seems that each stage of the tomato growing process goes at a snails pace as we anxiously watch them, much like waiting for water to boil!

Hi Margaret,
Tomatoes really seem to sit there for a long time right before they ripen.

I'm glad you posted about those salad turnips, I didn't realize there was such a difference between turnips and those were so much sweeter. It really makes me want to grow some turnips in the fall.

Your tomatoes are looking beautiful and healthy. I almost envy your climate (but not really :). My Pruden's Purple, sort of like a Brandywine, has one large tomato set and it has catfaced. Usually they only do that early in the season. My zucchini has also started to flower and they are all female. If there are no male flowers, you can pick the baby squash before it wilts and throw it in a stir fry.

Hi David,
The tomato plants are doing really well but it's been raining so much this week a few leaves are starting to yellow and get spotty at the bottom of the plants. The eggplant leaves are really starting to yellow but it looks like nutrient deficiency due to the heavy rain, maybe some epsom salts will help.

You're going to get zucchini soon. It's so wonderful when summer squash and zucchini start coming in. I do like our long growing season and our fall can be really long and pleasant.