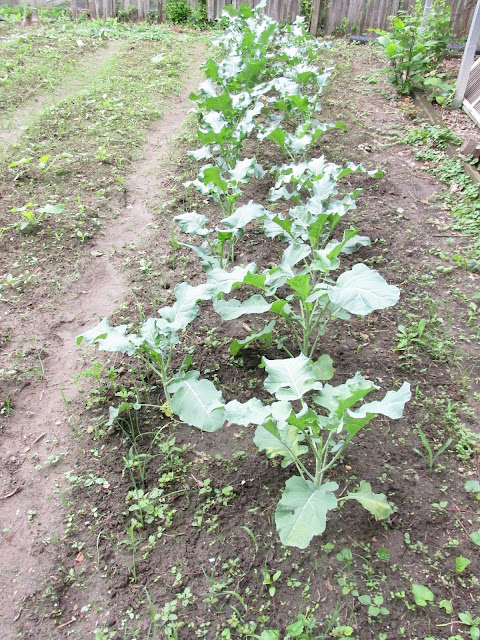 Forgive me but I’ve never grown broccoli or Brussels sprouts before so there are going to be lots of updates on these plants throughout the year. My partner says he’s looking forward to the brocooli and Brussels sprouts the most. So funny. I think Brussels sprouts are his favorite vegetable.

The Brussels sprouts are still young and darling. They were planted out today in the bush bean bed, along with a couple tiny Siam Queen basil, Shishito pepper, and eggplant seedlings that decided to germinate. Hopefully the Brussels sprouts were started late enough they will mature in the cold of early winter. We have a fairly long growing season with the first frost usually in the beginning of November. The varieties are Catskills and Brawny but I'm not sure how many were planted because I stopped counting after 14 Brawny plants.

The broccoli is doing well, getting ever bigger. I didn’t realize Summer Purple Sprouting broccoli was an overwintering variety (I do a lot of seed trading with a gardening buddy). The broccoli is actually planted closest to the house and since the garden is on the north side, that bed gets the most shade.

A golden retriever was walking through the alley while my husband was working on the house. He said the dog had a really sheepish look on his face, he glanced at my husband and looked away with a very guilty expression. So my husband thinks that’s the big dog that has been walking through the garden breaking broccoli leaves and squishing newly emerged seedlings like summer squash and zucchini and leaving tell tale signs like doggy footprints. Also something has also been digging up my pole beans and leaving little holes, I’m thinking it’s the incredibly fat squirrel that I see hanging around the perimeter of the garden. So fat. It reminds me of the squirrels out west.

Broccoli was started from seed on April 4th and Brussels sprouts were started on May 4th.
Posted by Phuong at 3:00 AM

They look good. I plan to try a winter garden and give all these cold weather veggies a try during that time as I don't have any luck with them in the spring/summer here in Texas.

I had two favorite vegetables as a kid. Brussels sprouts and spinach. So it isn't horribly strange to me. I'm not sure what my favorite would be now. Probably whatever I'm picking next.

Hi Texan,
I usually have problems with growing cold weather crops in the spring as well, but the new garden has a fairly shaded end which I think really helps with the cole crops.

Since spring is so busy with tending hot weather seedlings like tomatoes, eggplants and peppers and getting them in the ground, it's just nice to do the other cooler weather crops in the fall. Plus the weather is cooler and more fun to hang out in.

Hi Daphne,
I'm trying not to be too optimistic about the Brussels sprouts and broccoli since it's our first time growing them. My husband really likes spinach as well but I haven't had much luck with it, maybe we should try again in the fall.

I don't really have a favorite vegetable, but I remember eating that angled loofa last year quite fondly.