The weather here has been hot hot. Up around 88˚ F (31˚ Celsius) and humid to boot. I've been out in the vegetable garden braving the heat to plant 28 eggplants and six rows of bush green bean seeds. The eggplants are from all sorts of fun varieties from the Middle East, Asia, and Italy that were all started indoors from seed. The bush green bean varieties that were planted include Derby, Contender, Masai, Blue Lake 156, and Romano. After laying down one and a half packages of Dragon Tongue beans I happened to look down at the package and realized I was planting a pole bean variety amongst the bush beans. Luckily, the seeds were all still laying on top of the soil as a way to keep track of spacing and were easy enough to pick up.

None of my zucchini, summer squash, and okra seeds have sprouted after being 3 weeks in the ground, so I dug around and found some empty squash seeds in the soil. Ugh! The birds probably pulled up and ate the little sprouted seedlings as soon as they popped out of the soil, since they were planted before the bird netting was set up. I went ahead and soaked some more okra seeds in water for a couple days before planting because their seed coats are so very hard, in just two days little white roots could be seen poking out of all the Phillipino Lady Finger okra seeds whereas the Stewart's Zeebest didn't even look like they had swelled at all. Either way, into the ground the okra seeds went today.

The tomato plants are still very short from the birds eating the leaves and growing tips but oddly enough they are still managing to flower even under such duress. How exciting. 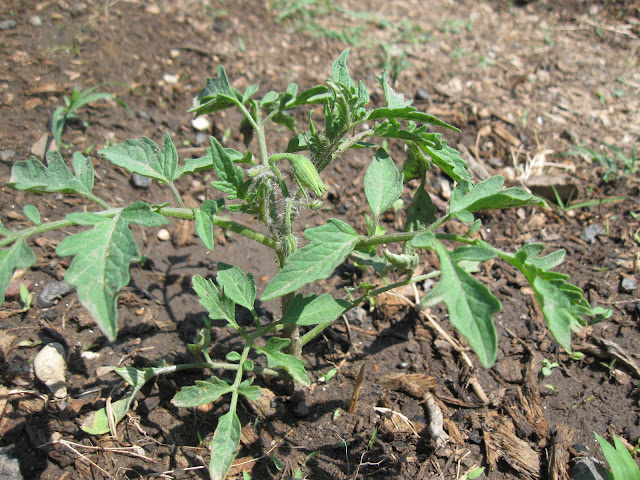