Tomatoes have come on strong this week. There's 45 tomato plants in my garden with 15 of them being small or cherry types. We'd been talking about drying the garden produce this year, which is why there are so many cherry tomato plants. I told my husband two weeks ago that we needed a game plan worked out because they were going to start ripening en masse.

On Sunday we processed about 40 pounds of tomatoes which are in the drying tent with a dehumidifier as I'm typing this. My husband is a ceramic artist and he uses a similar setup to quick dry newly made clay pieces in preparation for a kiln firing.

We've actually eaten a couple tomatoes the week before, but I've been kind of overwhelmed by the garden to post pictures. It's the weeding. The weeds have been going to seed and I couldn't let that happen, so between torrential rain showers I've been weeding like an insane person. 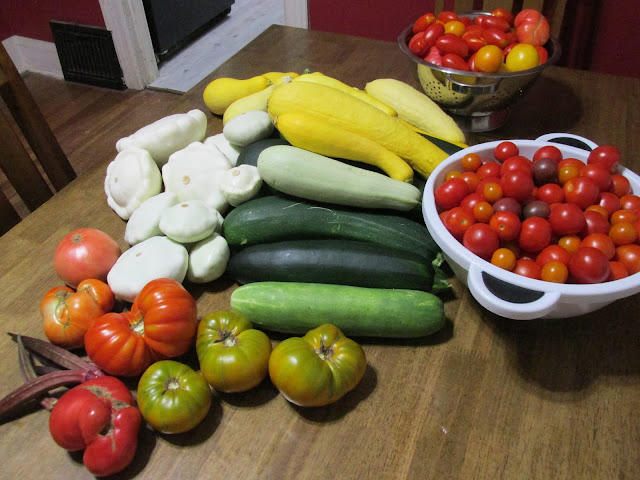 More tomatoes were picked on Saturday but aren't shown here. The small and cherry tomatoes include Juliet, Sungold, Fat Cherry, Black Cherry, Gardener's Delight, Taxi, and Juanne Flamme. The large tomatoes shown include Green Cherokee which have a yellowish skin color although the interior is very green, Giant Australian, and Brandywine. We've been eating tomatoes everyday this week so not shown are Marianna's Peace, Carbon, Oaxacan, and Goldie. The standout of the large tomatoes was Marianna's Peace, unless I'm confusing it with another tomato, it was delicious with a distinctly salty flavor. And for the cherry's, Juliet is just lovely, nice firm meaty texture with a sweet flavor that reminded me of a good grape tomato.

Also, you can see where I avoided the squash and zucchini beds because of all the rain and then was greeted by massive squashes. Must not put off visiting the squash beds. Once the tomatoes are dried, we're going to dry the squashes as well. 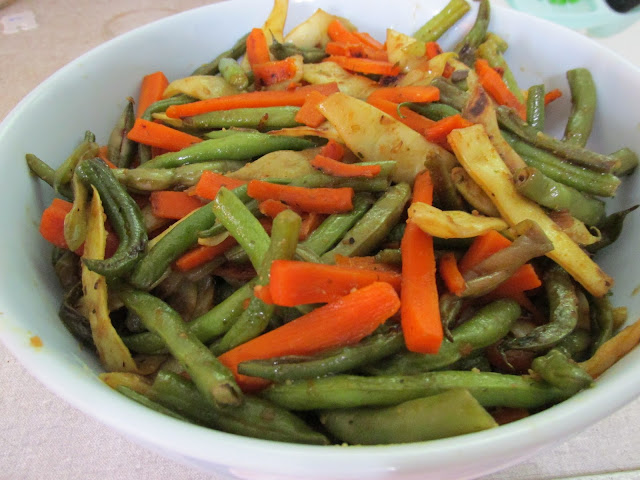 I've had a couple good pickings of snap beans. The first picking, the snap beans were sautéed with strips of carrots in a little olive oil with salt, pepper, and dried herbs till they were caramelized with a good bit of color. Then I added chicken stock and cooked it down until most of the liquid was cooked off. 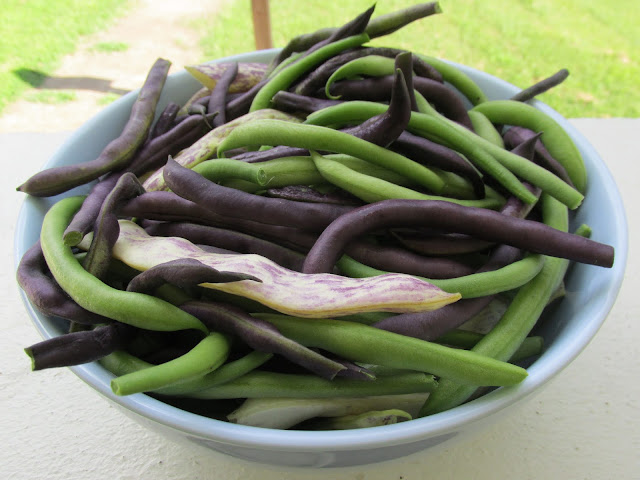 A picture of the second picking of snap beans, right before cooking. I'm only growing 3 varieties of beans this year, Merveille De Piemonte, Purple King, and La Victoire bush bean. 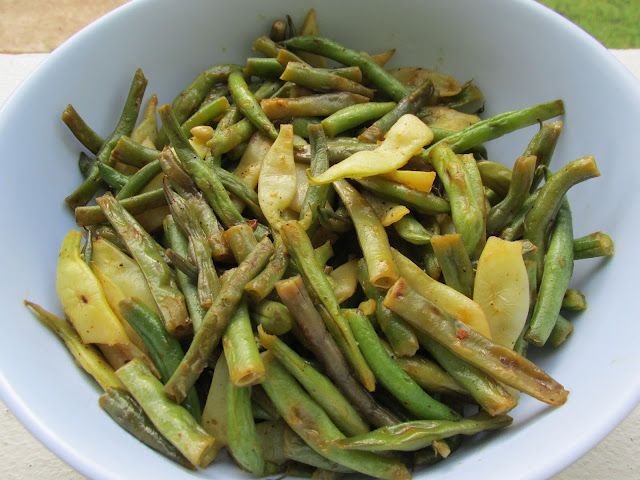 The second batch of green beans was prepared in a similar manner to the first but I added orange juice at the end, instead of chicken broth. Then finished it with a Pico Fruta spice blend that includes chili pepper and lemon peel.

The tomato bed with Giant Australian, Oaxacan, Carbon, and Brandywine are dying from disease. Most likely fungal because of the very wet weather we've had this year. I'm leery of using tomatoes from diseased plants, so am pulling that bed this week.

I've already cleared the lettuce bed and one of the squash beds. The plan is to plant peas, more bush beans, rutabaga, endive, and chicory in the three beds.

Please join us for Harvest Monday, hosted by Dave at Happy Acres. A place to share what you're harvesting and the fun things you might be doing with your produce because eating goes hand in hand with gardening.
Posted by Phuong at 10:56 PM

No red tomatoes for us yet. Our weeds and grass are growing far too quickly usually at this time of tear the grass hardly puts on any growth

Gosh you have been working flat out Phuong! No wonder you are overwhelmed with tomatoes with that number of plants but I guess it is a case of get all you can before blight strikes, same as here. Since we have such good blight resistant varieties now I have been able to grow fewer plants. I love the sound of your bean dishes. I must try one with the chicken stock like that only vegetable, as I have some. Thank you for the idea!

Hi, did you cut the tomatoes into small pieces before drying them? Thanks in advance!

I've been busy drying tomatoes here too. It's a busy time of year in the garden for sure. We've had enough rain to keep the weeds growing, and it's been a real chore keeping up with them now that the harvests are rolling in too! Your green bean treatment sounds yummy.

Oh my 43 tomato plants. One of my first years of having a garden in Massachusetts I planted 24 staked tomatoes. This year I planted only three to allow for better air circulation in our coastal location. What an ingenious way to dry the tomatoes.

Wow, 40 pounds of tomatoes is impressive. And 45 plants, what a lot of work! I've only got 32, and it seems like I'm pruning and tying up every day!

Reading your post makes me realize how lucky I am that weed season here is in the winter, I don't know how you handle a full garden and weeds at the same time. Tomato season hasn't really started for me yet, just a few, and I mean a very few cherry tomatoes. Most of my tomatoes ripen in September and October. The seasons are weird here.

Hi Sue,
It's such a relief getting the garden thoroughly weeded. We've got Bermuda grass, as well as henbit in our lawn, and I have to keep a bare dirt moat outside the garden so they don't make their way in.

Hi Kathy,
Early blight has only become a problem for us the last few of years, at least late blight waits for the end of summer before showing up. I'll have to look into more blight resistant varieties.

And the beans are really nice prepared this way, tender but not cooked to death.

Hi Jade,
I slice the large tomatoes into half-centimeter or quarter-inch slices. The little cherry tomatoes are just cut in half. We might have to get a food dehydrator just for electricity efficiency.

I went ahead and froze the dried tomatoes, they take up so much less room now.

Hi Dave,
It's fun dehydrating vegetables, so much less work than canning. Although, I'll probably end up doing a salsa garden next year which will definitely require canning.

August is really here, so it's time to get fall planting started. So much has happened this year, and I can't believe there's so much of the year left!

Hi Sue Martin,
Using a dehumidifier and drying tent is nice because it doesn't heat up the house at all, but it would probably work faster if we used a little heater. Then again, that would increase the energy expenditure.

Hi Will,
Wow, pruning and tying up tomato plants is a massive amount of work. I have a friend who swears by it, especially for humid areas.

I've used Florida weave to tie up plants before, but might have start experiment with pruning to help with fungal diseases.

Hi Michelle,
Weeding is exhausting, but since I'm catching the plants before they go to seed it'll make things so much easier this fall.

Your seasons are very interesting. It's almost like you get a spring that never ends.

Your greens are amazing and i esp. love how you have cooked with them. I am so envious of your tomatoes, ours are still all very green.

Thank you so much, Phuong! Learnt something here!😀