We've been eating greens, herbs, and green onions from the garden. They usually go in omelets and soups. 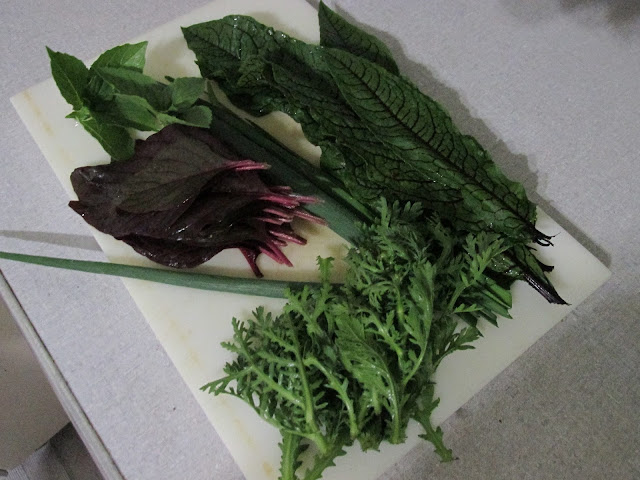 Clockwise from the top left: lemon basil, red veined sorrel, edible chrysanthemum, green onion, and red amaranth. The amaranth is fairly bland, it does very well in the heat but I'm not sure I'll grow it again. The red veined sorrel is not lemony like I expected, although the texture is good. But the edible chrysanthemum has a very surprising flavor that is fairly herbal, my husband thinks it smells like a musty attic.

In the end we definitely prefer kale and mustard greens when it comes to flavor and texture. 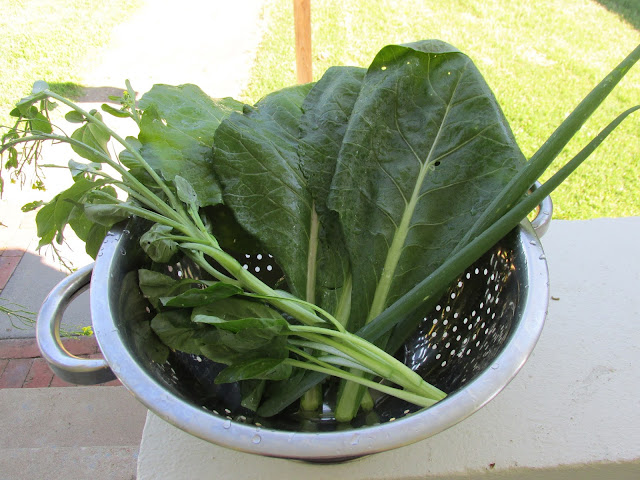 Free range mustard greens and green onions which went great in a spicy noodle soup. The blooming tatsoi was still very good, I just snap off the tough parts. similarly to the way we snap the tough bottoms off asparagus. These became part of a spicy noodle soup, otherwise known as fancy ramen. I add sliced pork and an egg to the soup as well. 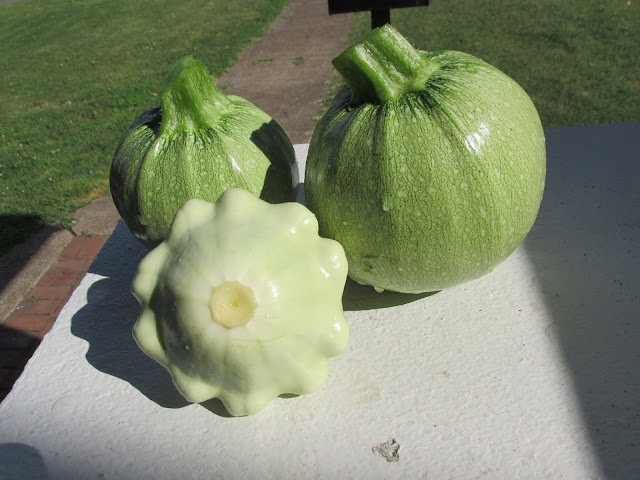 The first picking of squash on Wednesday, June 17th. Shown here is round zucchini and pattypan squash. My son had already chopped up the Straight Neck summer squash, dark green Fordhook zucchini, and another round zucchini before I could get a picture. 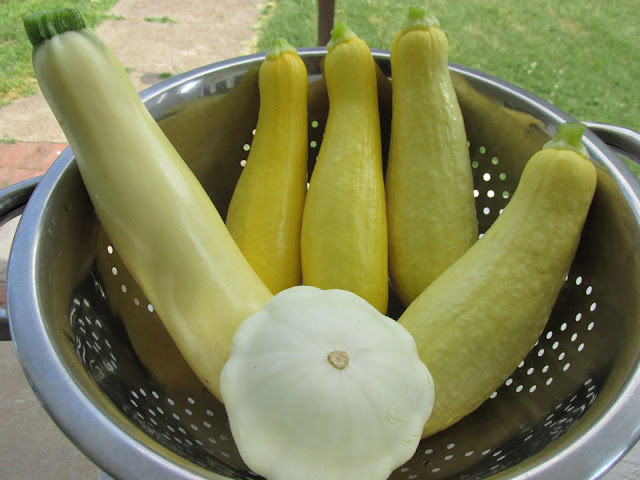 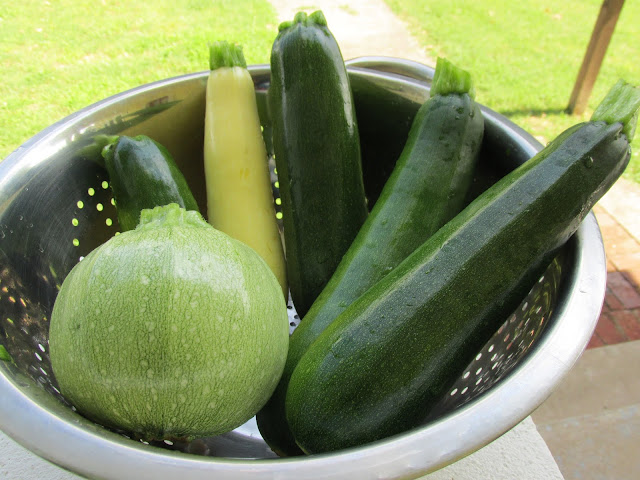 All zucchini in this batch that was picked on Sunday.

There's been very few squash bugs or vine borers in the garden this year. The 3 squash bugs I did see ended up disappearing later. I'm attributing this to the surprising number of beneficial lady bugs in the garden as well as a long cold and wet spring. We might actually end up with an overabundance of squash this year. I only wish I had planted some winter squash.

What to do with all this squash and zucchini? Squash hash browns. Just shredded squash dipped in a little egg with salt and pepper and lightly coated in panko bread crumbs, and then fried in patties in a little oil. They're wonderful, so light and tasty. My friend uses almond flour for lower carbs.

I've added shredded cheddar cheese and chopped ham to the squash hash browns, which is just amazing especially served with macaroni and cheese. They also reheat very well in an air fryer.

There's a lot going on in the garden. Bush snap beans are thinking about blooming, little tomatoes are swelling, and it's actually time to start thinking about starting plants for the fall garden. I read an interesting blog post about overwintering broccoli and cauliflower plants that end up setting very early heads in the spring. It'd be a fun experiment to try.

Please join us for Harvest Monday, hosted by David at Happy Acres. Where gardeners from all around post about what's happening in their little and not so little vegetable plots.
Posted by Phuong at 9:58 PM

Darren @ Notes From the Allotment said...

Those squashes look fantastic! Ours have only just been planted out, I left them late this year after a really cold, wet start to the summer in 2019 killed most of them off last year. Fingers crossed ours will be even half as good as yours when they're ready. I'll definitely be cooking squash hash browns as well :)

Phuong your greens and yellows are wonderful and cheery. I am esp. admiring your red veined sorrel, edible chrysanthemum and red amaranth as they are totally new to me. I am a bit sad that i am not growing round courgettes this year :( but look forward to harvesting my yellow ones. And wow Straight Neck summer squash, again another veg i have not been successful in growing. So much good stuff growing in your garden - i love it and wish i lived close to swap.

Looks like you have plenty of squash coming on too! I tried amaranth and the bugs ate mine up, so I never really got to taste it. I like your squash patties idea. I love panko, but never thought to use it for the shredded squash. It makes my mouth water just thinking about it!

Hi Darren,
A late frost is such a nightmare, and to have lose all those seedlings too. Ugh. I totally understand waiting to plant out, thank goodness seedlings are so good about catching up once they're in the ground.

Our plants usually don't last long because of vine borers, but I'm really hopeful this year since I haven't seen any flying around at all.

Hi Shaheen,
The sorrel is very slow growing at first, but it's a perennial and my second year plants are very big and lush. Close to two feet across. And the Straight Neck squash is a bit troublesome to get them to germinate, this year it took a couple days of 90 degree weather (32 degrees Celsius).

I love the fruit trees and berry bushes you have in your garden, it's so picturesque. I've been thinking hard about growing berries, but the birds are so terrible here that it makes me hesitant.

Hi Dave,
This time of the year is just the best, it's so wonderful to have all the squash to experiment with. I'm going to try growing winter squash on remesh panels next year, your plants already look amazing. It would help so much with space in the garden, and maybe I can grow all the varieties I've been dreaming of.

Hello Phuong - This is my first time reading your blog; your harvest looks amazing! I too make something similar to your squash hashbrowns, just that I've called them zucchini pancakes. They freeze wonderfully, if you end up making a very large batch. I freeze them flat on parchment-covered baking sheets, then fill up gallon freezer bags so I can bake or fry them off all year long. I love them savory, topped with tomato sauce and some fried eggs.

It will be a while before we are harvesting squash, maybe some courgettes soon as some have flowers. I’ve never heard of edible chrysanthemums

Some lovely squash there - I actually think we don’t get the squash bug here (yet!) Edible chrysanthemums? No, I’ve not heard of that.

Hi Liz,
Your zucchini pancakes sound delicious and the fried egg sounds wonderful. I'm going to do that with my next batch. My gardening plans were very last minute as well, it's been a fruitful diversion.

Hi Belinda,
I've never seen so many bugs until I moved here. I'm just thankful for the long cold spring and ladybugs that seem to have limited the bug population. I love seeing the poppies and flowers in your garden. The edible chrysanthemums are actually blooming prettily now.

Hi Sue,
The edible chrysanthemums are a bit medicinal tasting, I'm probably not preparing them right. Your brassicas look like they're settling in very nicely. It makes me realize I need to start some seeds for fall crops.