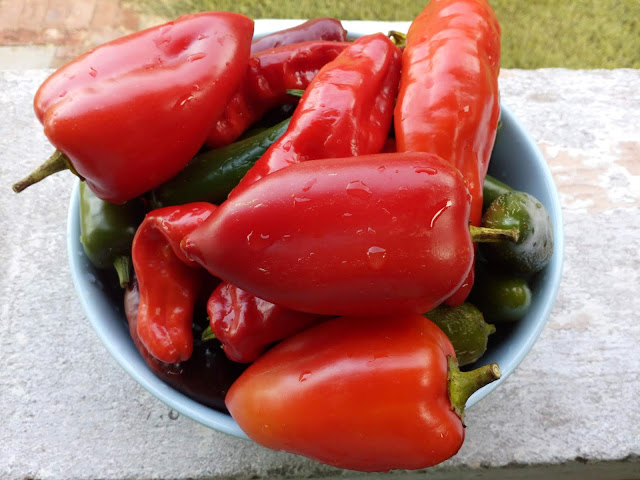 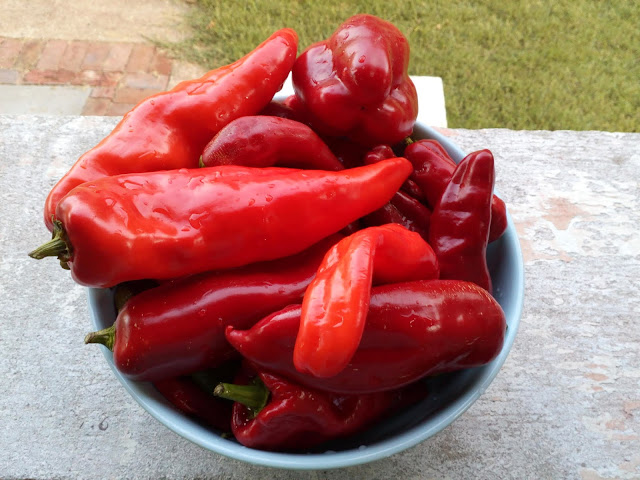 Please join us for Harvest Monday hosted by Dave at Happy Acres, a place where the strong at heart and overzealous come to share the fruits from their gardening labors.
Posted by Phuong at 4:34 AM

Lovely peppers, Phuong. Peppers and onions on rice sounds really simple, but delicious. It's interesting that you get hot shishitos. I've never had a hot one, but maybe it's the difference in climate or the variety I grow (Mellow Star).

My shishitos get hot sometimes too, and I stopped growing Padrons because it seemed like they were always fiery hot. We're finally getting some ripe sweet peppers here too. I grew Feher Ozon a couple of years ago and I dried it for paprika. I didn't much like the flavor of it fresh. I do think a lot of sweet peppers are better cooked than raw, like Jimmy Nardello for instance. I'll have to check out Melrose. It's amazing your zucchini are still producing. Mine were toast a month ago.

I haven't heard of any of these peppers so something to look out for. The Padrons here don't get too hot and are delicious but i didn't grow any this year and now I am wondering whey. Ah well, next year.

Hi Will,
Maybe it's both the climate as well as the variety in regards to the too hot Shishito peppers. I'm growing an unnamed variety from Kitazawa seeds, so I'll check out Mellow Star. The peppers have been setting fruit like crazy since the weather has cooled a bit, hopefully they'll still have time to ripen nicely.

Hi Dave,
Pepper season is such a wonderful time of year, especially since it signals the coming of cooler weather. Your late summer plantings are looking incredible, mine are just starting to germinate. I hope we get a nice long fall this year.

Hi Joy,
It's wonderful when you find a variety that is delicious and does wonderfully in your climate. Whenever I find something like that I always think to myself, "I'll never be without you again."

Hi Sue,
Peppers usually grow well outdoors for us, so I end up trying lots of different varieties. I'll mainly grow sweet peppers again next year. Although a few of my friends stuff jalapenos with cream cheese and then wrap then in bacon before baking, so I might change my mind if I end up liking that dish.

With the very hot summer here the padrons are more fiery than usual especially once they are red, and we are using them up fried in strips alongside mushroom and courgettes as they are not very fleshy. Apart fromm jalapenos, the others are all new to me... they look really good

Hi Kathy,
I picked a few tiny Padrons to see if they'll be milder than they're larger counterparts. One of these days we'll have a cooler summer, so I'll keep seed saving and trying to growing a couple plants. The longer red peppers in the top photo actually Corno di Toro Rosso and they can be nicely prolific for me.

Hi Dave,
It was such a hot summer, I'm not surprised your zucchini plants burned up. Our garden is actually on the north side of the house with big oak trees shading one side, so they usually don't die from the heat, it's usually bugs that does them in.

Your peppers are absolutely amazing and I can only imagine how good they taste. I have never been able to grow them well and of course, living in the UK - we would have to grow them in the greenhouse.

Hi Shaheen,
Some of them are incredibly sweet, especially when cooked. It's almost too hot for peppers here, they set only a few fruit in July and August because the heat sterilizes the pollen. Did you end up planting greens or herbs to grow during the fall? We get a nice long fall with the first frost not coming to the last week of November, so almost three months of cooler weather.