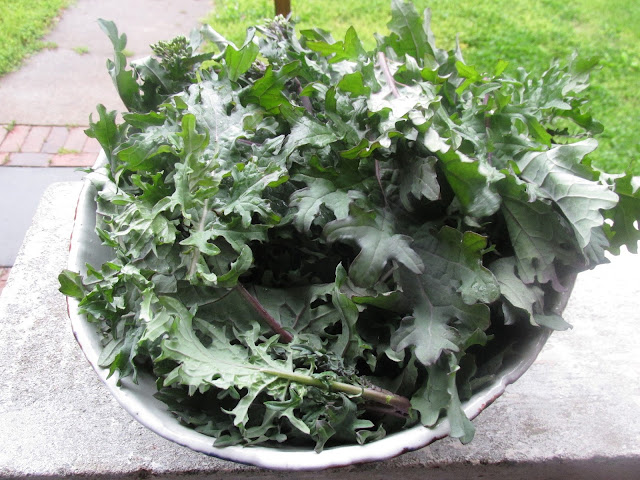 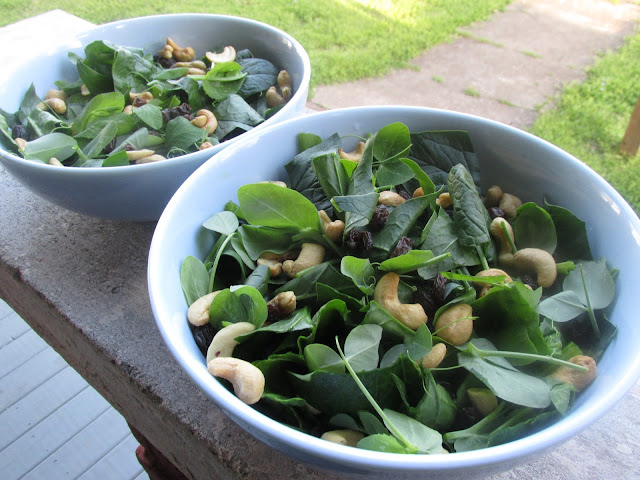 Please join us for Harvest Monday hosted by Dave at Our Happy Acres. A place where irrepressible gardeners share their harvests and what they've been preparing in the kitchen.
Posted by Phuong at 4:28 AM

I tried growing some pea shoots for salad but it seemed you needed to grow so many to harvest a decent helping and I.was just growing them in a seed tray so ended up with more like just a taster.

Those are some great looking greens! I miss spinach since I didn't sow any last fall or this spring. We got rain here too so who knows when I will be able to work up the garden. It has been the wettest spring I can remember!

Your kale looks great. Overwintered kale tends to get full of aphids here so it's rare that I get to enjoy the shoots in the spring as those are actually the parts that the aphids prefer. I didn't even overwinter any this year. I love pea shoots and there's a couple of varieties that I've grown that are meant to be harvested as shoots and the peas themselves are meh. But I've figured out that really just about any pea variety is tasty in the shoot stage.

I'm sure you are now glad that you planted some overwintering greens - my best ever crop of spinach was one that I overwintered but I didn't get around to sowing any last year. With out very late spring, I'm wondering if they would have been successful anyhow and I have a feeling we are going to have a rather short transition from spring to summer.

Hi Sue,
The pea shoots have such a nice pea/peanut flavor, and they keep really well wrapped up in the fridge. I must've started between 100-150 pea seeds in a large flat, which made a very decent amount of greens.

Hi Dave,
All this rain makes me feel apathetic about starting more seeds, but I know the rain will have to end some time. This is the first time I've ever been able to overwinter spinach even though it was an exceptionally cold year. It looks like you're keeping up well with the seed starting.

Hi Michelle,
The really cold weather seems to have done a number on the insects. I'm really hoping we'll have less problems with squash bugs and such. I had never eaten pea shoots before, and they really make a salad extra special.

Hi Margaret,
It's insane you had an ice storm in April. Pure craziness. I really wish our other greens had made it through the winter, but we've been having spinach salads almost every night which is lovely. Did you have to grow your spinach undercover to get it to overwinter?

I did top it with straw, just like I do the garlic and asparagus bed, but that's about it. Hopefully I'll have the patience to sow some for overwintering this fall.

I did chuckle at the idea your husband accidentally mowed off all the carrot leaves.. that's the sort of thing that happens round here once my other half gets the strimmer out. Last year we lost half a row of potato foliage along the edge of the bed lol

And we also love pea shoots, they have such an intense flavour. Perhaps try basil or rocket as microgreens. We always use the small thinnings and they are very good

Hi Margaret,
That's a great idea, burying greens under straw once a deep freeze threatens. Makes me want to do a bigger patch of spinach and corn salad in the fall so I can try it out.

Hi Kathy,
Losing half a row of potato foliage to a strimmer sounds about right, hopefully your plants recovered and were able to produce. I've only tasted the harsher flavored rocket, but might give one of the named varieties a try.