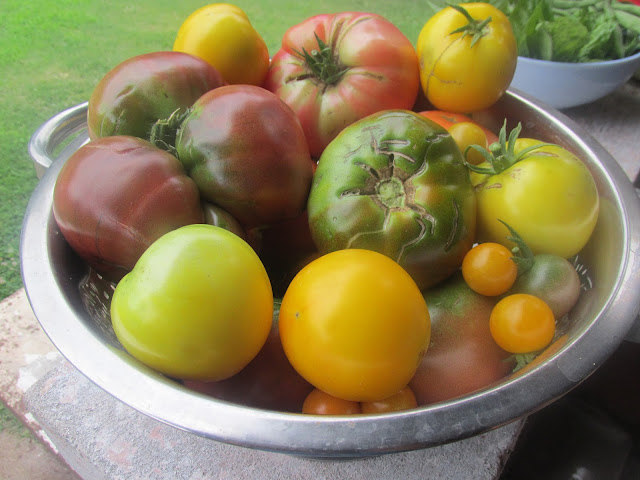 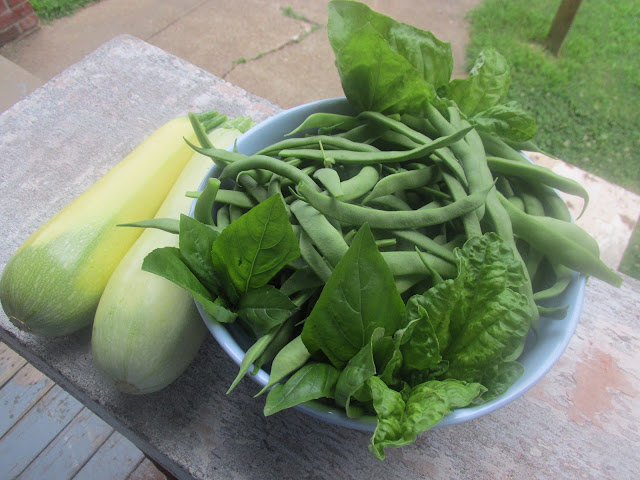 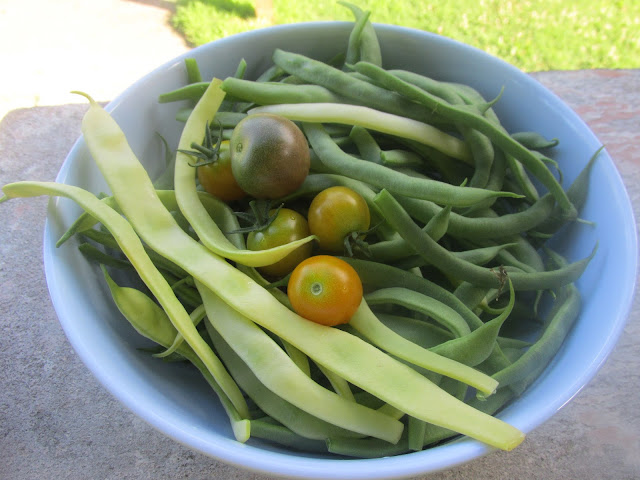 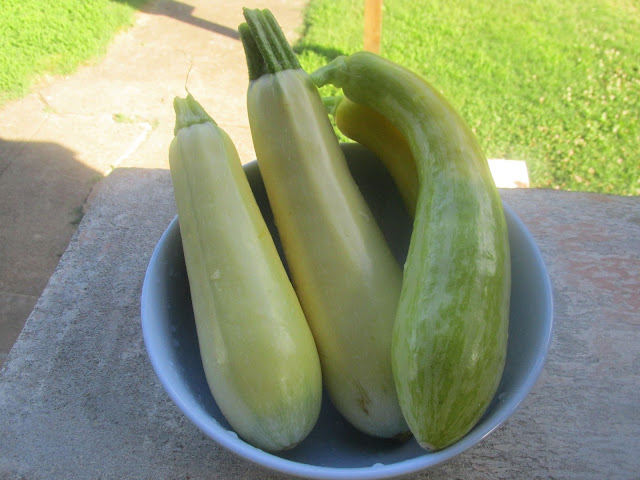 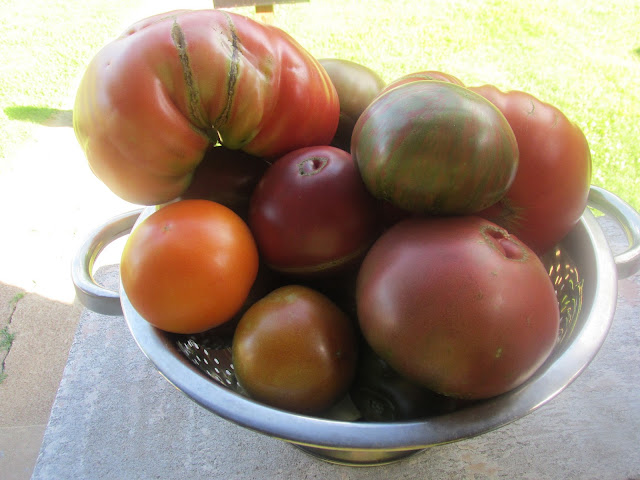 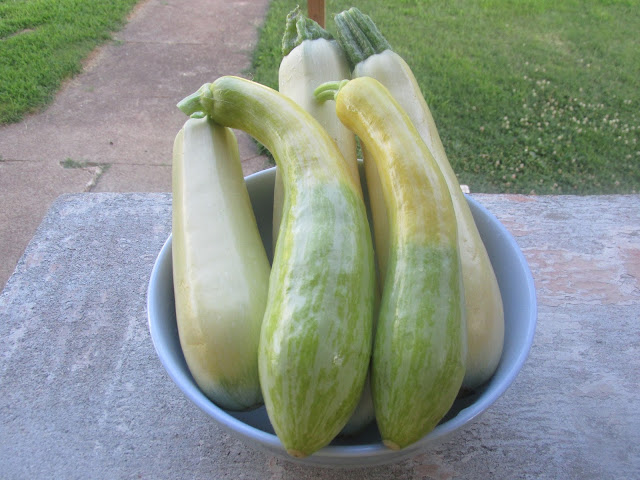 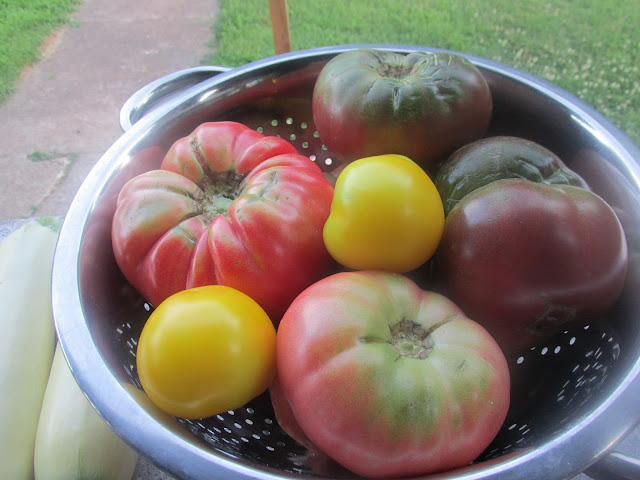 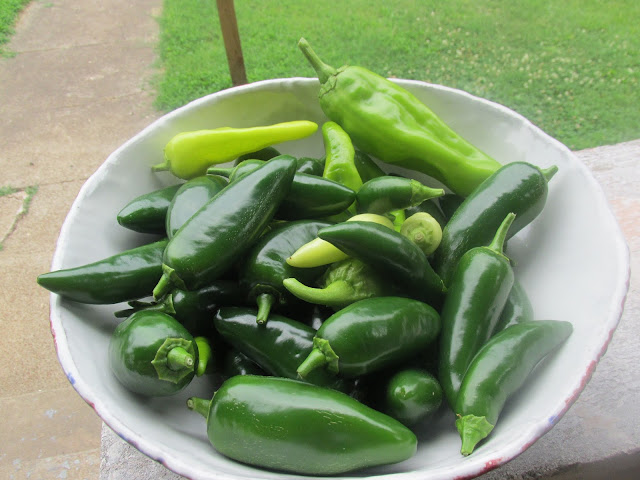 Please join us at Harvest Monday hosted by Dave at Our Happy Acres, a happening place full of vegetables and their gardens.
Posted by Phuong at 8:23 PM

Our tomatoes and peppers are still at the flower stage. Just as well as we are busy enough picking berries.

Wow, you are way ahead of Nebraska gardens. We here are just past the flower stage but not yet to the harvest stage. It really sounds like you will be very busy for a while. Good luck with the Salsa.

Those tomatoes are simply amazing! I am growing Cosmonaut Volkov for the first time and I hope mine do as well as yours are doing.

Hi Sue,
Your berries do so well consistently, our garden has a much more feast or famine quality about it. I'm starting to get an idea on how I want the fall garden to play out.

Hi David,
This is actually a very unusual year for us, we normally start picking tomatoes at the end of July. It's so weird because we actually planted three weeks late this year due to rain.

Hi Dave,
Cosmonaut Volkov is very consistent for us, it produces tomatoes even in extreme drought and heat. Hopefully it'll do well for you, too. And interestingly enough, there's a baby rabbit in the garden, my husband thinks there's probably a family of them living in there.

Wow, just beautiful tomatoes, too bad the peppers aren't as early for the salsa. The peppers that you have look very nice, are they jalapenos? Most of my peppers have lots of foliage right now and I think they will start producing eventually, but not much yet.

Hi Mike,
The great majority of the peppers are jalapenos and they're gigantic this year even though there's not tons of them. The variety is Early Jalapeno, but it's probably the affects of the cooler than usual spring and regular rain.

Holy moly that's a lot of tomatoes! And beautiful they are too. This year has been a pathetic year for my tomatoes. Ah well, maybe next year!

Hi Mary,
You've had an insane amount of critters going after your vegetables. Last summer squirrels took a bite out of most of my tomatoes but luckily hawks moved in and now they seem to be gone. If we still had a squirrel problem my plan was to get a fake owl and fake snake and move them around the garden.

I too am impressed with your tomatoes harvest, Black Brandywine weighing close to 1 1/2 pounds, bet it was delicious.

Hi Norma,
The tomatoes are wonderful but not as sweet, since it's been rainy and cooler than normal years. We're planning to do a big canning session this weekend for tomato sauce and juice.

Wow - your garden is so productive this year - I'm SO jealous especially as this year is turning out to be a bit of a flop on my end. I suppose we have to have a bad year every once in a while, so I'm just going to ride it out and hope that next year is better :)

It all looks beautiful and delicious! The Black Brandywine looks especially amazing. Congrats on the harvests.

Hi Margaret,
I'm sorry this year is so terrible, hopefully your plants will get big enough to weather the rabbits. We were lucky the rabbits didn't show up till the garden was fairly mature, I found their nest in the bean patch. Bad years can be very depressing, I'll cross my fingers that some hawks and owls show up to help you out.

Hi Bill,
We're having an amazing year between the tomatoes, squash, and snap beans. Everyone in the region is having an epic season, my friends say people are telling their neighbors to come pick what they want out of their gardens because they're done canning and picking for the year.