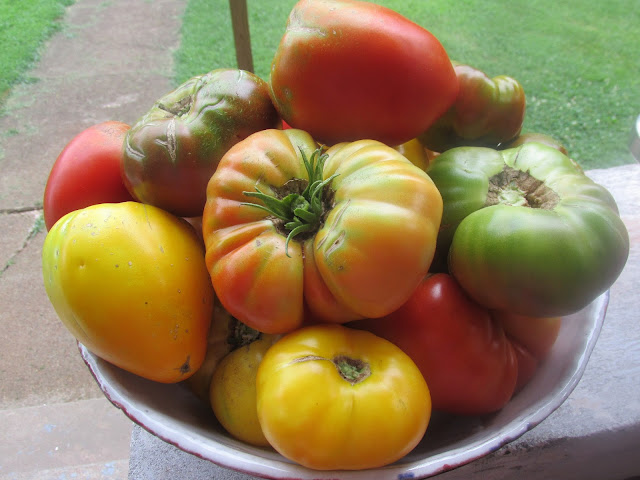 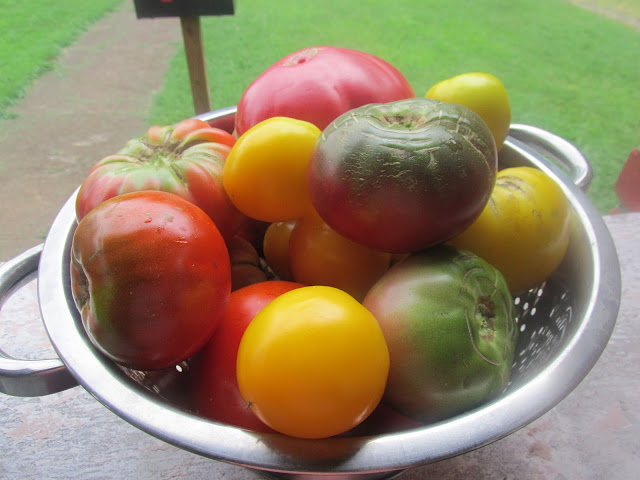 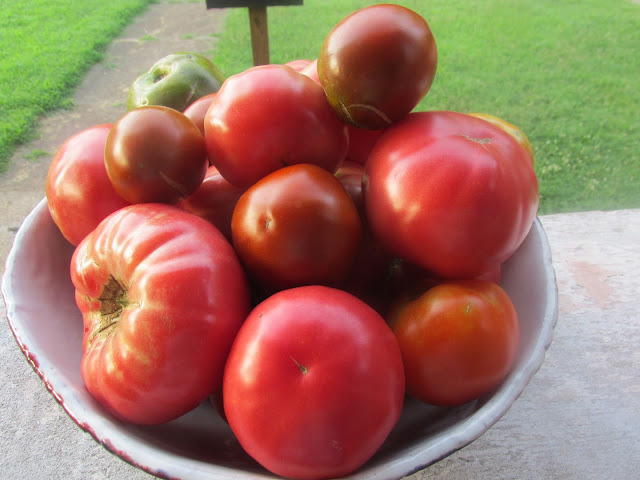 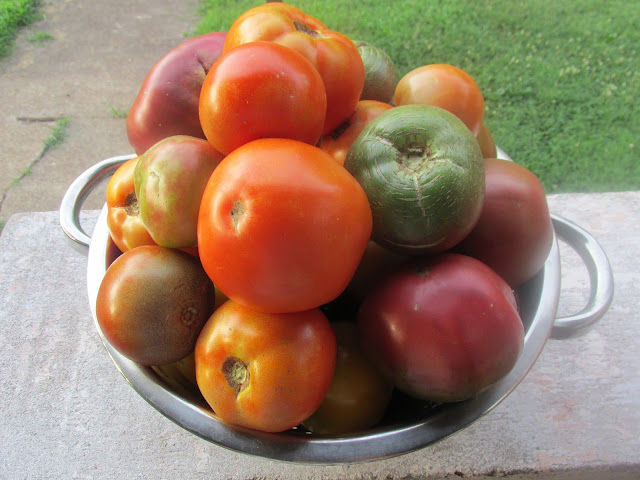 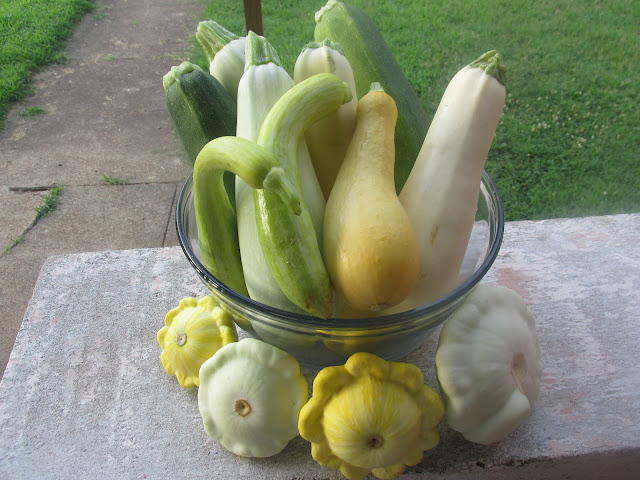 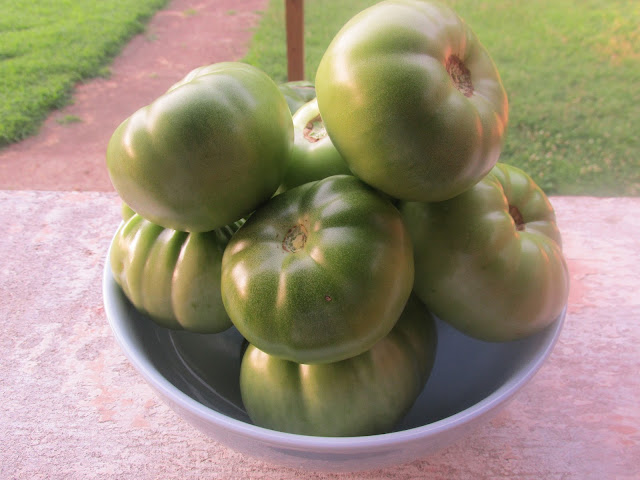 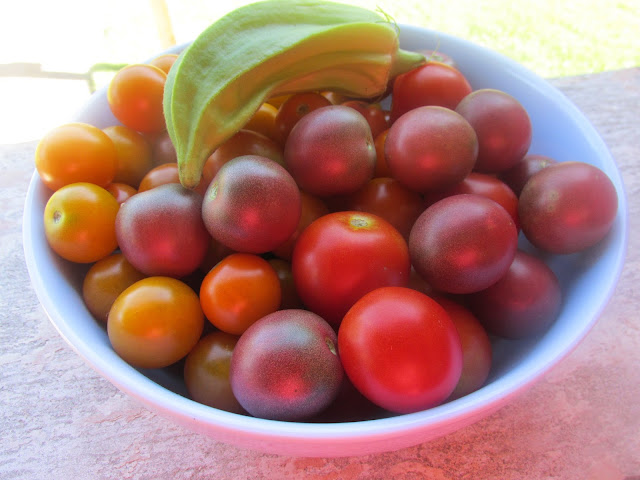 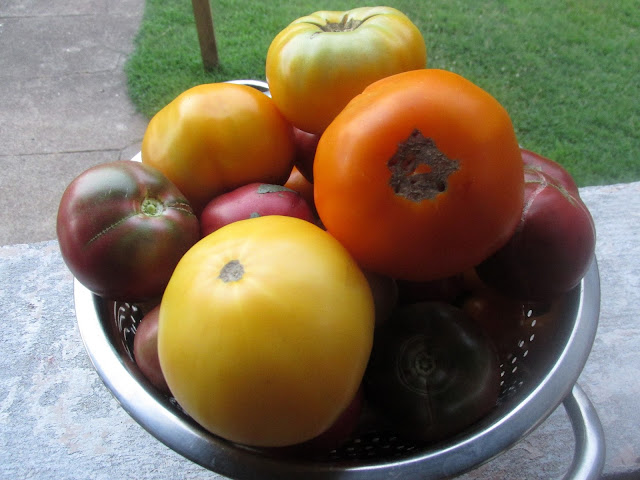 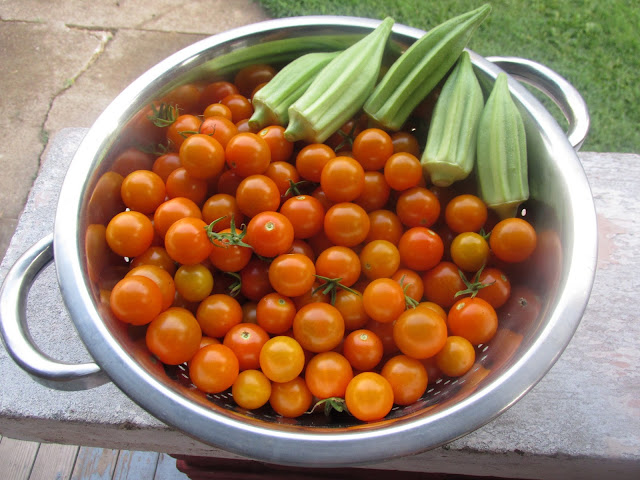 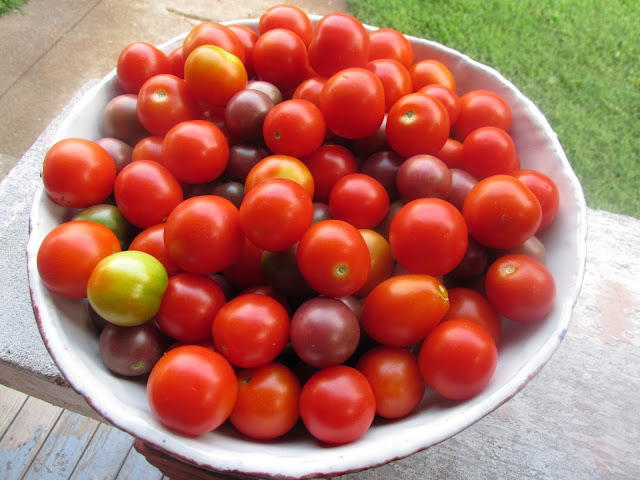 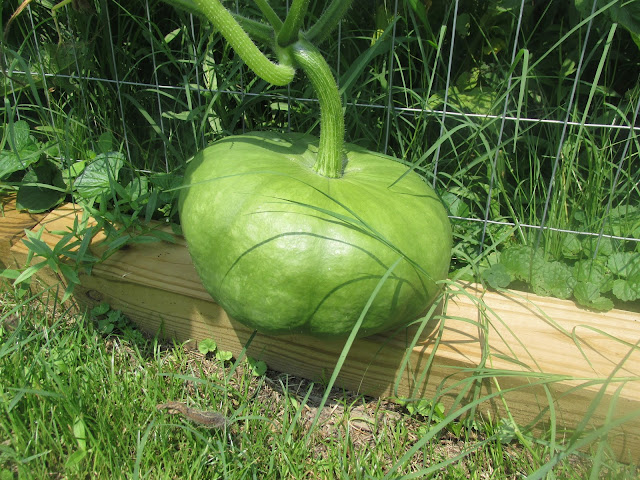 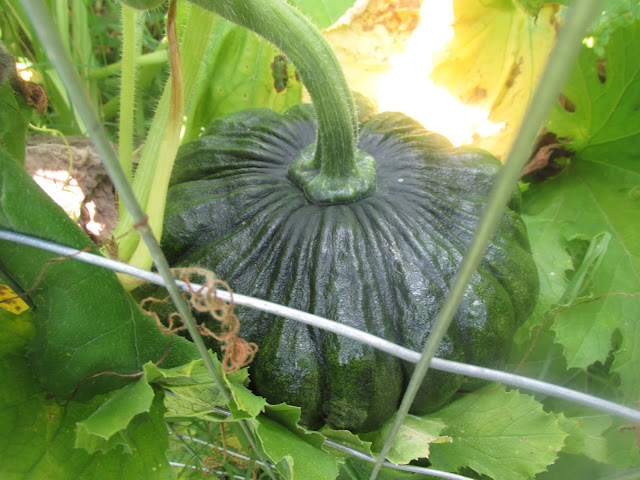 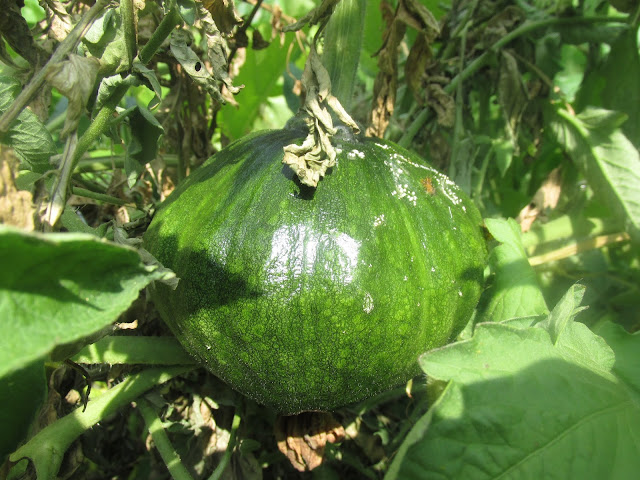 We won't be having any melons this year, since they're all overshadowed by the massive tomato plants. And the leeks were squished by the rampaging zucchini plants, but maybe they'll recover once the zucchini gets pulled.
Posted by Phuong at 1:34 PM

That's a massive amount of tomatoes to deal with.

We probably have enough salsa at this point to last us a few years, so next year it won't be necessary to plant so many tomato and hot chili pepper plants. Your potatoes and brassicas look incredible. That's interesting that you're sowing peas already, I might go ahead and plant some as well.

That 's our last sowing of peas for the year. We start sowing them at the beginning of April.

Congrats on your best year ever!! It always feels so good when most things go very right in the garden :)

Hi Sue,
That's interesting you continuously stagger plantings of peas. It sounds like a great way of getting fresh peas all the time, something that's almost never available at the grocery store.

Hi Margaret,
It's actually been a happy surprise for us, after a couple years that were duds. I'm going to try pressure canning some raw packed tomatoes and green beans this week.

Not all the time - we have now sown our last lot until spring. We freeze some for winter though.

That is an amazing amount of tomatoes! They are beautiful too. I have one of those Victorio strainers, and I used a lot when I made juice. Now I just put the tomatoes in the blender seeds and all for sauce.

This is shaping up to be a very good year for tomatoes but so far I've picked about a pound. You are probably about 200 miles south of me (SW Indiana) but way way ahead on tomatoes. That's just an incredible harvest of tomatoes, and that's a lot of salsa to can.

Wow! What an amazing bounty you have! Your photos are just a joy to see. I am especially interested to read in a month or two when you harvest your Winter Squash. It looks like you are growing some interesting ones. Keep on harvesting and canning. You will be glad this Winter!

Very impressive harvest. Leeks are hardy and I am sure will bounce back.

Hi Sue,
Your last planting of peas, do they fruit into time for fall? I've never been able to get the right timing down for planting cool weather peas.

Hi Dave,
I really like the Victorio food strainer, it's a bit leaky and messy but so much better than a food mill. I'm actually starting to make pickles using green tomatoes, it's been a lot of fun making vinegary syrups and different flavorings.

Hi Mike,
Your tomato plants look loaded down with fruit. It's been a good year weather wise for tomatoes. We probably have enough salsa to last a couple years, so the plan next year is to grow fun stuff like melons and the like.

Hi Lexa,
Some of the squash vines have started dying back, probably from the pressure of vine borers and squash bugs. Hopefully the fruit will ripen before the plants totally die out.

They did last year. We have just sown some so it will be interesting to see if hey do the same In what has been a dry year.

Hi Norma,
The trench method for planting the leeks seemed to work really well for us. We have such incredibly heavy soil they definitely struggle when planted in deep holes.

Hi Sue,
I'll go ahead and start planting peas now, maybe my problem was due to not planting early enough.