Tomatoes and Brassicas All Potted Up 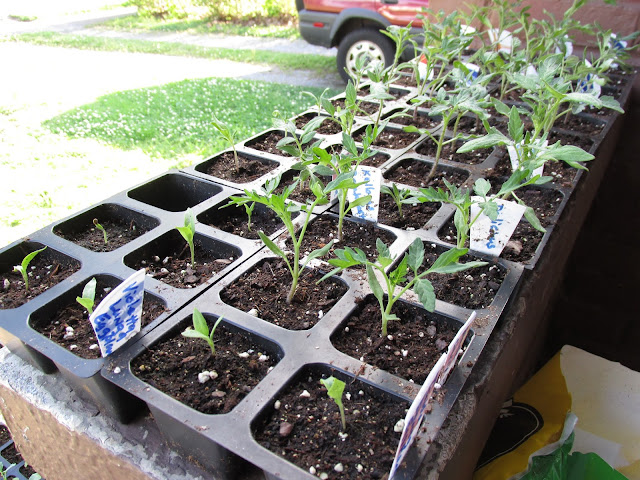 Since the ground has been too soggy to do any planting, I spent the weekend re-potting the tomatoes and a few tiny eggplant seedlings into individual containers. Hopefully the garden will dry out by the end of the week and I can get some planting done by Thursday and Friday. I've been saving eggshells and coffee grounds all winter, so there should be enough for each tomato, pepper, and eggplant to get a nice sprinkling in their planting hole. 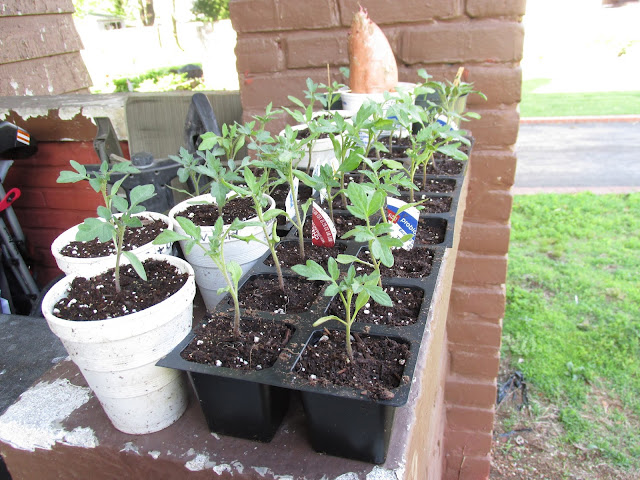 I found this grocery store sweet potato sprouting in the kitchen, so it's spending time outside suspended in water. Once some roots form, the starts will get planted in a couple big pots in front of the porch. My sister in-law said she did this last year and got 20 pounds of sweet potatoes from a single planter.

There's a couple Crimson Sweet watermelon plants a friend gave me hiding behind the sweet potato. 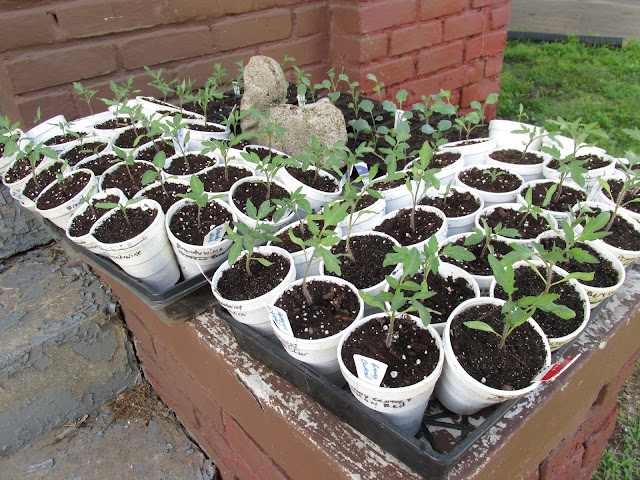 I've been re-using these styrofoam cups for years. The plant labels are made from yogurt container lids, rubbing alcohol should take the permanent marker right off so I'll be able to re-use them too. 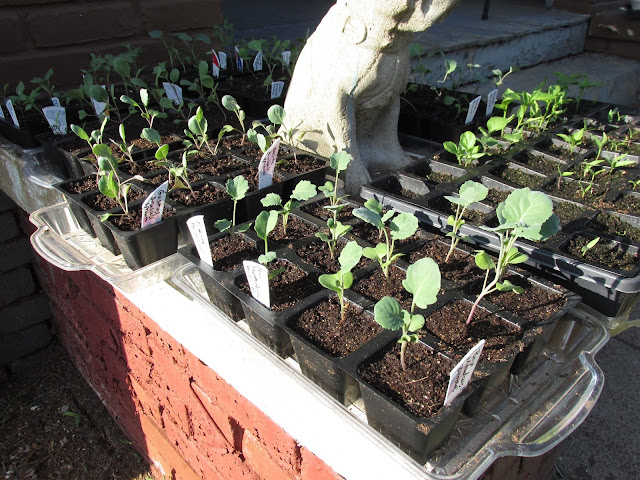 The broccoli and Brussels sprouts got re-potted last week. I still have no idea when's the best time to plant Brussels sprouts. My friend keeps telling me they need to be started in June or July to ripen in November, but they're just so slow growing. And the winter light is so weak, I can't imagine them growing much once fall hits. But I'll go ahead start a few in early summer just incase.

That's eggplant and peppers in the back-right, I had to re-seed a few varieties which are still sprouting. 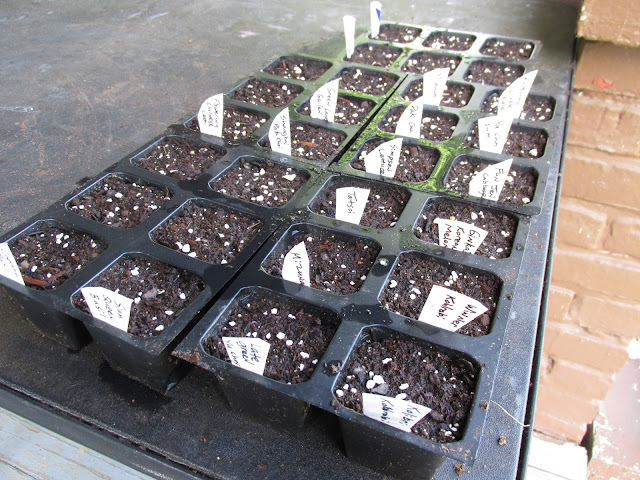 Tomorrow my partner is installing a dishwasher. In the 17 years we've been married we've never had a dishwasher, except for a small on-the-counter one which lasted just over a year. I'm so excited!


I wanted to mention. This year has been the year of the clover. Clover is carpeting the ground and blossoming everywhere with their pretty pink or white pompom flowers. The last time this happened I had an epic gardening year, tomatoes and peppers abounded and eggplant plants grew 5 feet tall. I am very hopeful.
Posted by Phuong at 9:14 PM

Wow, you are really going full steam ahead!! Clover is a legume, so with it's nitrogen fixing ability, I think you are quite right to feel optimistic about your harvests this year!

And congrats on the dishwasher - once you have one, you'll wonder how you got on without it for all those years :)

Hi Margaret,
I'm so excited about this year. We got a pressure canner so I'm hoping to put up a lot of green beans and tomatoes. Plus we have huge plans for salsa.

How are your seedlings doing? I know you're in the midst of a cold spell, hopefully the temperatures will start heading upwards soon.

Wow, so many tomatoes!!! And what a brilliant idea about making plant labels out of old yogurt lids. I've never grown sweet potatoes but I'm going to try them this year (I think).

Hi Jennifer,
I really went overboard with the tomato plants this year, friends and acquaintances will be forced to benefit. And definitely try growing sweet potatoes, they're just so easy and you should have the heat they require. My sister actually in-law lives in Boise and last year was her first year growing them.

Great that you need not worry about wildlife chomping on your veggies. Wishing you a bountiful garden year.

Hi Norma,
It's awful when animals destroy plants. Was it last year that you had terrible trouble with a woodchuck and rabbit eating all your seedlings?

At our old garden birds destroyed half of my tomato seedlings a couple years in a row, so I got into the habit of starting at least twice as many seedlings than I needed. It's been very hard for me to break that habit.

You have definitely been busy. It's a lot of work potting up that many seedlings. Some of my tomatoes are getting ready for bigger accommodations but the peppers are still small. I will have to steal your idea of using yogurt lids for markers. I saved some cups for planting but the lids were just going into the recycle bin.

I can't say you have too many tomatoes and peppers, since I have quite a few myself! It is still soggy here too but I am hoping to get some planting done in the next few days. I am thinking of setting out a couple of early tomato plants (Sun Gold, Supersweet 100). I am hoping we all have an epic gardeing year!

Hi David,
I got rid of a bunch of yogurt lids, too, before I realized they could easily be used as markers. Re-potting plants is such a chore but they really respond to it.

Hi Dave,
I'm going to try to get all the plants in the garden in the next couple of days as well. And I started a couple Sun Gold plants after you mentioned them on your blog. I have high hopes for this year's gardening!