Around the Garden and Tomatoes in Bloom 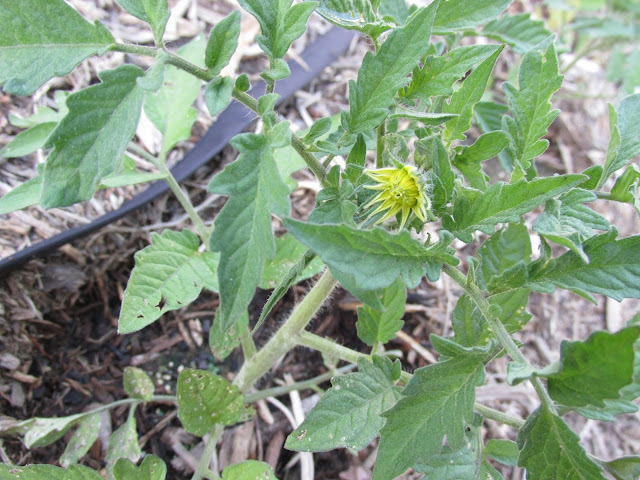 I wanted to show some pictures of this and that in the garden, yesterday was another 95 degree sultry day (35 Celsius) and it's not even summer yet. Here's a Pink Berkley Tie-Dye in bloom. They produce large delicious tomatoes that are purply-pink with beautiful bright green striations. For such a large tomato it is usually one of the first to produce ripe fruit, usually right behind Paul Robeson, a tasty but much smaller tomato. 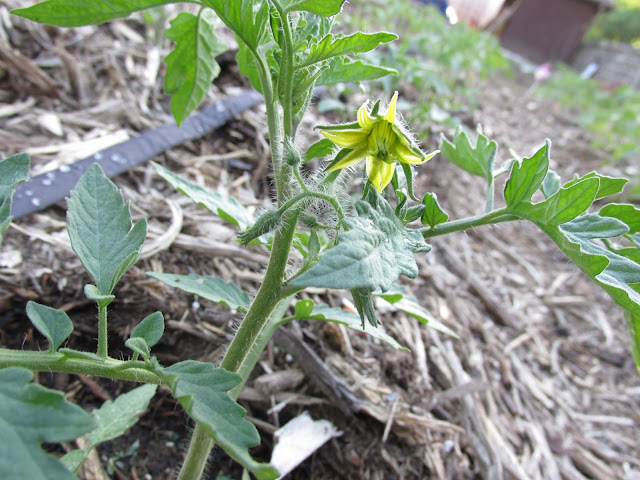 Black Krim is also blooming. One aspect of growing primarily heirloom tomato varieties is that the pistil, the female portion of the flower, can stick out past the stamens where the pollen resides. So the flowers won't necessarily get pollinated unless by a insect pollinator or by mechanical means such as wind, or in my case in the mornings I go along lightly tapping the plants with a bamboo pole to encourage the pollen to drop onto the pistil. Once I started doing this there seemed to be a lot less flower drop from the tomatoes. 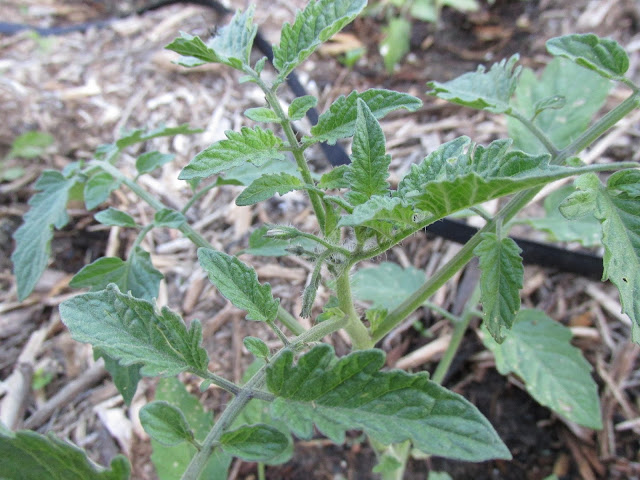 The newly planted Sun Gold cherry tomato is also forming flowers. Just about every tomato plant has blooms except for the ones especially stunted by flea beetles feeding on them. 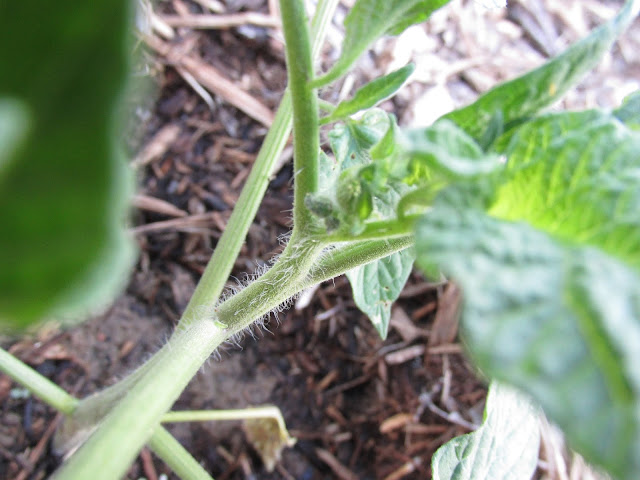 Even the notoriously late fruiting Pink Brandywine is forming flowers. Actually Brandywine ripens fairly early for me, but our summers are hot hot and humid which Brandywine seems to enjoy.

About half the tomato plants ended up being killed by birds and replaced with my extra 'emergency' plants, and 23 plants were given to friends and coworkers this year. Once soaker hoses were set up in the garden, all bird activity ceased. Maybe they think they're snakes or it's later in the season and more food is readily available. 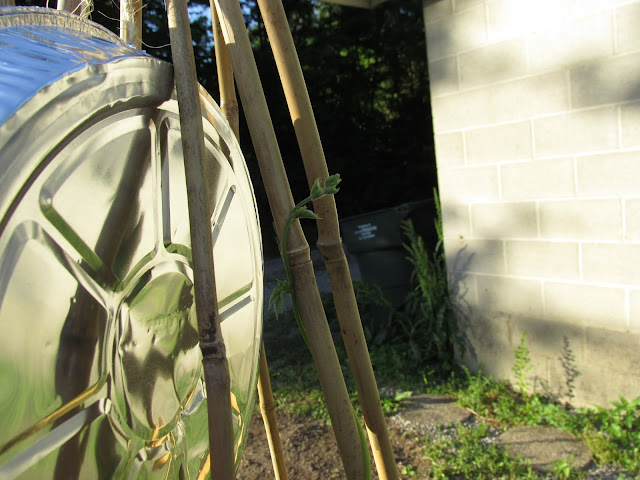 A little pole bean is getting close to the top of its trellis on its way to the sky. 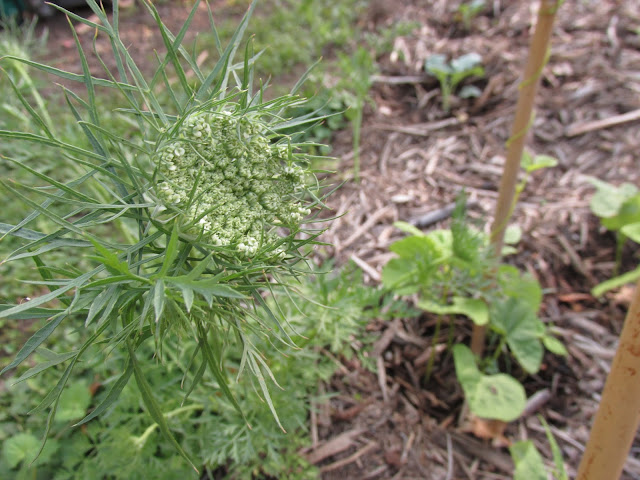 A beautiful carrot bloom. The bees are too besotted by the sweet clover to pay any attention to the carrots. 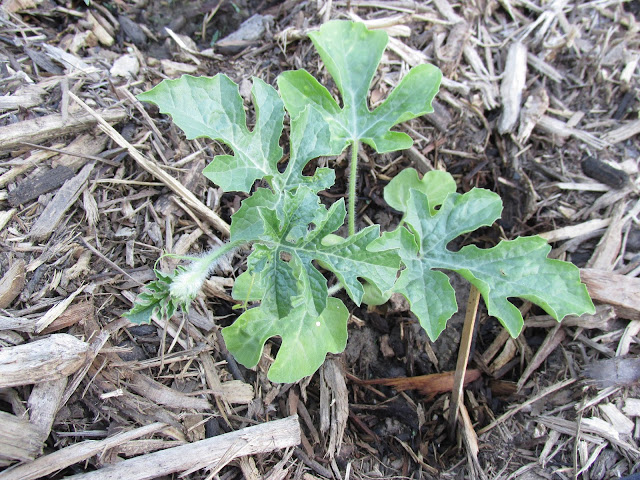 A buddy of mine gave me a couple of Crimson Sweet watermelon plants which were planted beneath the tomatoes. I gave her a bunch of broccoli plants, who got the better deal? :)  They've already formed their first tendril and it looks like they're starting to vine.

I'm also growing a yellow-skinned white-fleshed Korean 'Ginkaku' melon that's supposed to be sweet sweet with crispy flesh, they are just starting to get their first true leaves and will get planted under the eggplants and peppers. 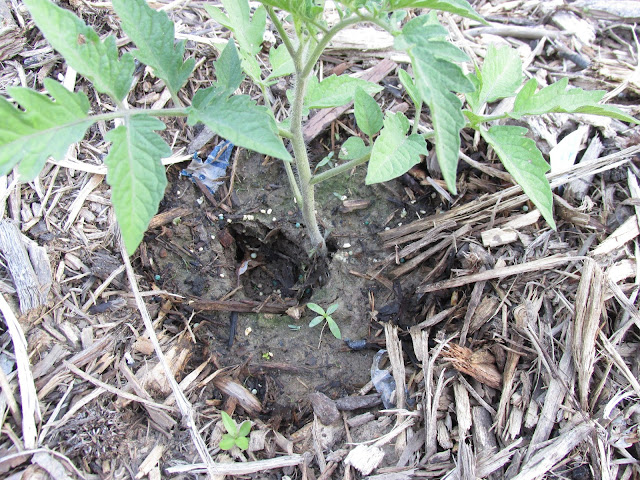 Big dog footprints. They are everywhere in the garden, he/she actually smashed one of my eggplants. It'll be fantastic when the fence gets put in. 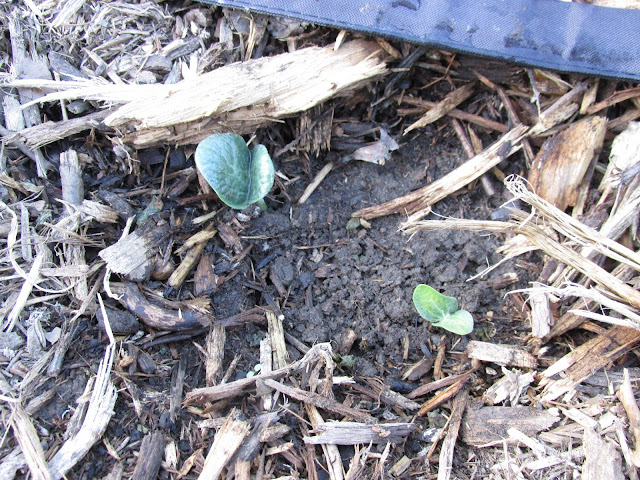 Pretty pretty zucchinis, I can't wait for the bounty of summer. 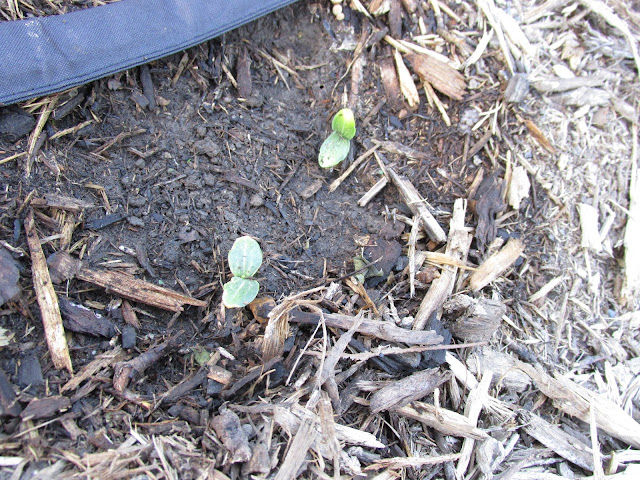 Both types of zucchini I'm growing this year are Italian varieties: Striato D'Italia and Fiorentino. 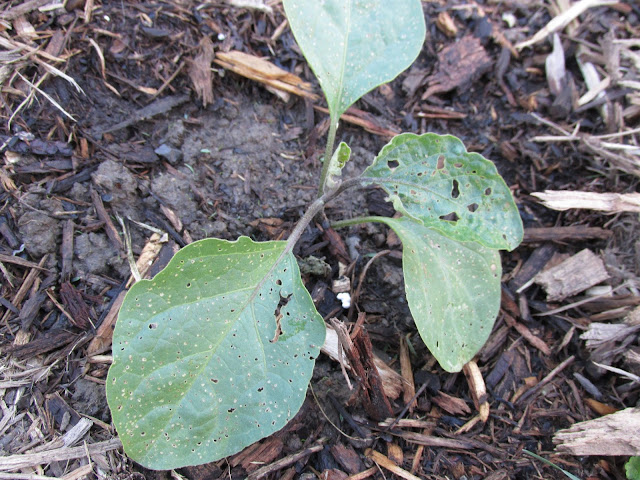 Eggplants are much loved by flea beetles. Awhile after watering I dusted the eggplants and broccoli with diatomaceous earth.

Once nighttime temperatures get above 75 degrees, most peppers won't set fruit. So I need to get them in the ground now. The first flush of flowers need to set before it gets too hot, otherwise it'll be the end of summer before we get any peppers. No peppers will definitely interfere with our salsa making plans.
Posted by Phuong at 7:06 AM

How interesting! I had no idea that heirlooms sometimes had this issue - I'll have to examine the blooms on mine once they appear.

And a fence is an unfortunate necessity around here too, but more because of the rabbits than anything else. I've gotten away with not putting the fence up in the area where we took down the spruce tree as I need to finish mulching 1st, but every time I go out there I have my fingers crossed that bunnies haven't found my beds.

Hi Margaret,
I finished planting the peppers yesterday, and I even planted the Korean melons. Yayyyy! We also marked where the fence posts are going to be.

It looks like you've been working hard in your garden and soon you'll be done, too!

Things are sure looking good there! It's been even hotter for you than it has been here. We hit 90F one day, but no more. I'm hoping for an early set of peppers too, as well as pole beans. I'm getting a late start on the beans, so I am hoping they get a break from the summer heat long enough to make some beans.

Hi Dave,
I have very high hopes for the peppers, too. I want to say, you've inspired me to grow more dry beans and shelly beans. You've been really busy in your garden as well. It's a good thing we have such a long growing season, all that rain has put everyone behind.