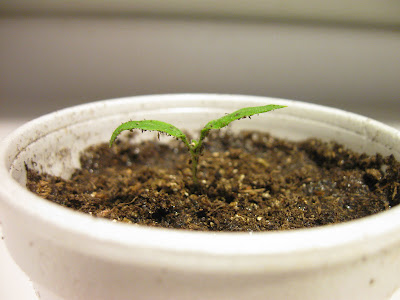 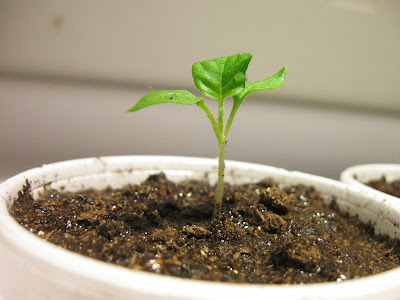 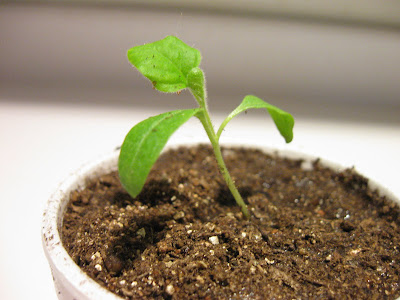 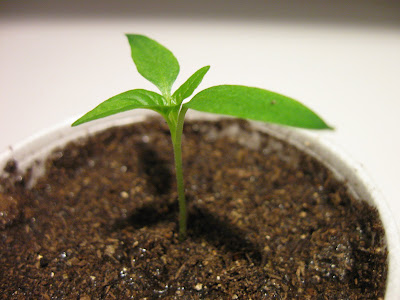 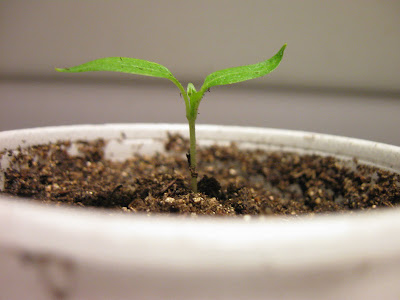 I spent the day transplanting the tomato, eggplant and pepper seedlings from the seed starting tray and peat pellets to individual styrofoam cups which are reusable. Bakers Creek Seeds suggests planting the seeds for eggplant and peppers shallow because light helps them to germinate as well as bottom heat. This year I used a simple inexpensive clip-on shop light which is kept on twenty-four hours a day to speed growth and kept them in a warm room. In the past I have been able to get very high germination rates close to 100% for both peppers and eggplants by using a combination of very warm bottom heat, domed seed starting trays that keep the humidity high and water from the bottom, and by using houseplant potting soil which doesn't contain any peat moss. This year I didn't have the bottom heat and the soil contained peat moss, so germination was low with only 19 eggplant and sweet pepper sprouted out of 42 seeds planted which means less than half germinated.
Three out of five varieties of eggplant have sprouted after being planted 4 weeks ago which include exactly four Malaysian Dark Red, three Green Raveena hybrid, and three Bride Eggplant. So I have ten eggplants all growing well and forming their first set of true leaves. The size of the seedlings correspond with when the seeds first germinated as the Green Raveena's were the first to sprout and are the largest. The main reason the eggplants were started so early was in the hopes of getting them to a large size before planting out, so they will be strong enough to withstand the flea beetle infestation that occurs every year. I actually have a three prong plan for the eggplants:
Seven varieties of sweet peppers were planted but only five Aconcagua and two Red Cheese plants have germinated. Aconcagua are large thick-fleshed sweet peppers with fruit growing up to a foot long borne on tall three to four feet plants that may require staking or caging as heavy rains can knock down plants heavily laden with fruit. Red Cheese sweet peppers are a pimento type that produces small thick-fleshed peppers that are somewhat shaped like little tomatoes and are borne on smaller plants. Peppers are perennials in warm areas of the world so it is possible to dig up a plant and pot it up to protect in the warmth of your home, and when warm weather arrives again the plant can be placed back into the ground where it will grow into a large bush and produce loads of luscious fruit. Although, depending on the variety being potted up for the indoors leaf drop sometimes occurs.
Posted by Phuong at 10:11 PM