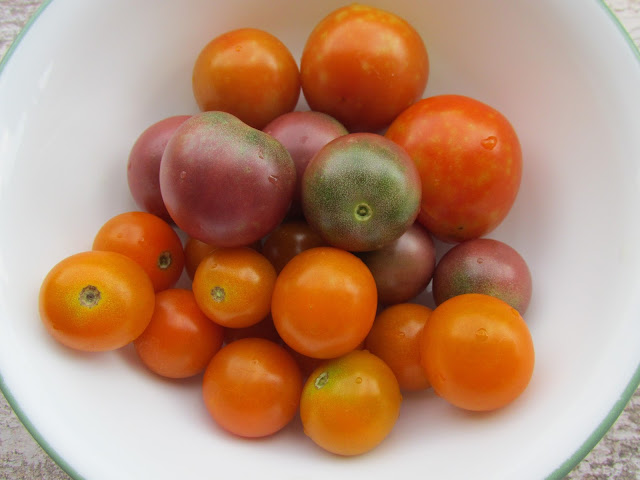 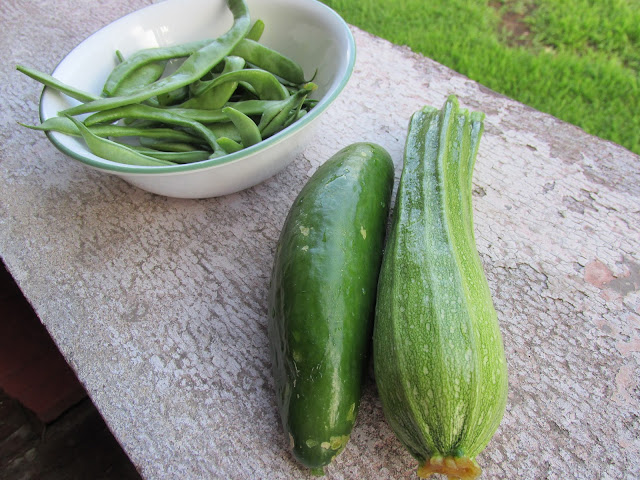 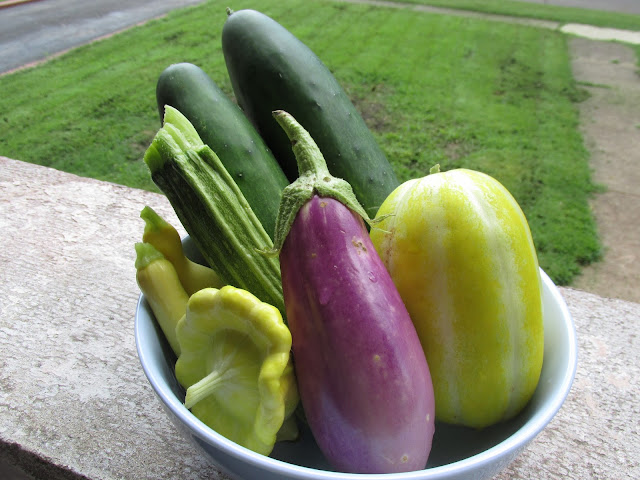 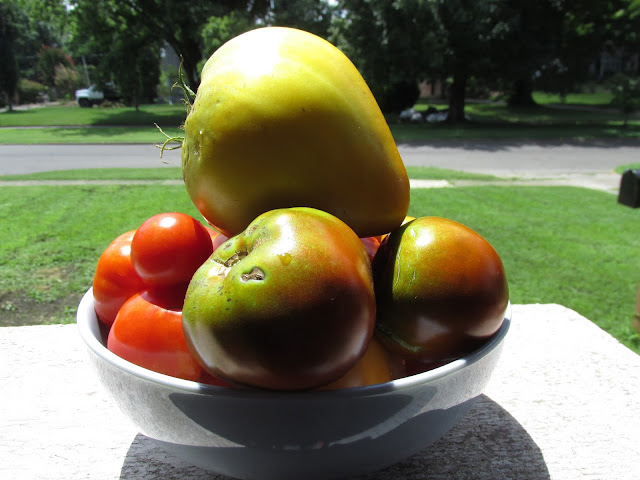 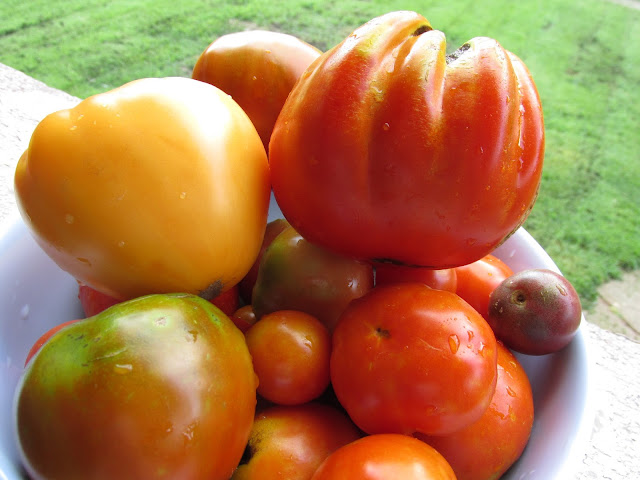 Please join us at Harvest Monday, kindly hosted by Dave at Our Happy Acres.
Posted by Phuong at 4:46 AM

You can tell it is summer when there is eggplant, squash and tomatoes in the harvest. And you got to harvest that King of Siberia monster. Will be interesting to see how it tastes.

Quite a collection of tomatoes. Sure wish we have some rain, a day of good soaking may take care of the drought but there is no percip in sight, sigh.

I would echo Norma's comments. Unlikely that we will see any rain until October at the earliest. I see all your green grass and know how much water from above or by sprinklers it takes to sustain it. I don't know if I'd be such an avid gardener if I had to contend with your heat and humidity. I'd probably be gardening at sunrise. Love to see all the tomatoes. Black cherry are my favorite cherry.

Gorgeous tomatoes! How frustrating to have to share with the squirrels. I think, actually I know that they are worse than the rabbit that I have to contend with and am so thankful that they rarely venture anywhere near my garden.

'Unbearably hot and humid' - yep, that describes the weather over here too! I work outside in the morning and stay inside after lunch. And it's raining again today, just enough to keep the humidity up. You are ahead of me on slicing tomatoes and pole beans. My beans are blooming so it won't be long now. And I have some slicers starting to turn colors. I will have to watch them for splitting. I am so thankful squirrels aren't a problem here. The walnut and mulberry trees seem to keep them happy, and they leave our garden alone.

I know how you feel about the humidity. I'm always impressed that the plants can survive through the summer. You know it's humid when you have to give your camera lens 30 minutes for fog to clear up before taking any pictures! It looks like you are getting lots of lovely tomatoes. I've never heard of the Ginkaku melon, what is it like?

That's a nice early harvest of large tomatoes. You are several weeks ahead of us in central Indiana but it sounds like it is not quite as hot and humid here as it is for you, minor differences I'm sure. There's more to come with temperatures this weekend approaching 100 F!

Hi David,
We'll probably try the Golden King of Siberia sliced up tonight with dinner. Black Prince and Black from Tula were both sampled on BLT sandwiches last night, so good.

It sounds like you're having a terrible drought, hand watering is definitely not the same as a good long rain. But you're still managing to harvest some beautiful kohlrabi and napa cabbages.

Hi Norma,
It rained heavily right before the tomatoes started ripening so I don't think they're as flavorful as they could be. I hope you get some rain soon. Hot dry weather is so hard on a garden.

A perfect summer harvest with cukes, zukes, tomatoes! Mine are at least a few weeks behind but that's typical here. Glad you are keeping up with the gardening despite the heat and humidity, it can be a challenge sometimes for sure!

Hi Susan,
It seems the older I get, the less I can stand the humidity and heat. It's just been a bad year for it with 100 degree weather off and on since the end of May. It seems like California has been in a drought for a very long time.

Black Cherry is a fantastic tomato, it's my first time growing it and I find it keeps it's size up as well.

Hi Michelle,
The squirrels took a couple of big Cherokee Purple tomatoes yesterday, just as they have started to color up. Ugh! So I went ahead and started picking tomatoes that were not quite ripe. And I think they killed one of my melon plants digging around.

Hi Dave,
It's been a really hot year. Our tomatoes were actually planted 3 weeks late, but the hot weather had them ripening just as early as last year.

It sounds like you'll be swimming in tomatoes and beans soon. I really like how you plant your pole beans on netting in a zig zag pattern, you probably get tons of beans that way.

Hi Julie,
It's funny when just the humidity coming out of the earth manages to fog up a camera lens.

It's hard to tell when the melon is ripe because it doesn't slip. The chilled melon is crispy and sweet with a hint of citrus and honeydew, and the skin is so thin that we just ate it without peeling. I picked another one today that looks more ripe so we'll see if the flavor profile changes.

Hi Mike,
It sounds like it's heating up in your neck of the woods, and your squash plants are doing amazing. They must be loving the heat. Mine have barely started running yet but something has been eating their leaves so they might end up doing nothing.

Hi Susie,
I couldn't do it without the mulch, it really helps to hold the weeds at bay. Your spring new potatoes and spring crops look so good.

The squirrels actually got a bunch more of the tomatoes, two huge Henderson Pink Ponderosa, the first Cherokee Purple, and the first two Black Brandywines. I never had problems with squirrels when I used fencing as supports, so I'll probably go back to that next year.

No ripe tomatoes here just one or two tiny green ones and the climbing beans are just beginning to flower.

We're lucky with squirrels too -- they're everywhere, but they leave the garden alone.

You get humid, we get rain and clouds in the PNW..

What a great tomato harvest so far. I'm still waiting impatiently for mine to ripen. The Ginkaku melon is really pretty. I've never seen one before.

Hi Sue,
Your garden is doing fantastic, it's amazing the amount of fruit and vegetables you're able to grow. I'm going to try a late planting of peas as well, hopefully they'll have time to do something this fall.

Hi A.J.,
I've never had problems with squirrels before, hopefully the hawk I saw flying around will take care of them. The Pacific northwest is definitely famous for their rain and mild weather. It's been so hot, I'm kind of looking forward to winter.

Hi K,
The tomatoes are really coming in, if the squirrels don't get them first. We tried a more ripe melon but it was just a little past its prime, still crisp but starting to get mealy.

It looks like you got a great onion harvest and your winter squash are doing really well.