Treating the Garden With Beneficial Nematodes 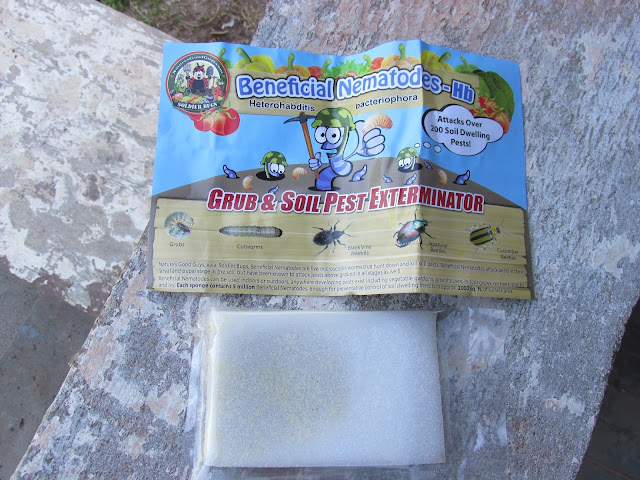 We got the beneficial nematodes in the mail yesterday. My husband immediately brought them inside so they could cool down. They need to stay below 85 degrees Fahrenheit or you risk killing them, I had paid for expedited shipping and yesterday was our coolest day of the week at 82 degrees. 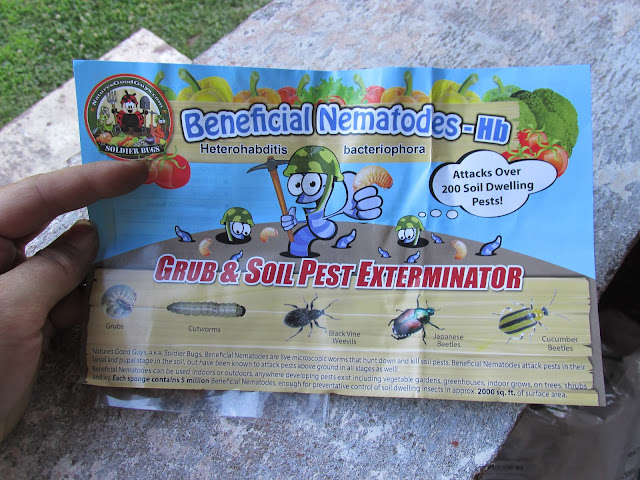 On the back of the insert they list a lot of the insects the beneficial nematodes are supposed to be affective against their larva, and the big one for me is flea beetles. They won't do anything for the adult flea beetles but it's supposed to kill off their young. And hopefully these nematodes will reproduce in the garden and maybe help eradicate flea beetles. 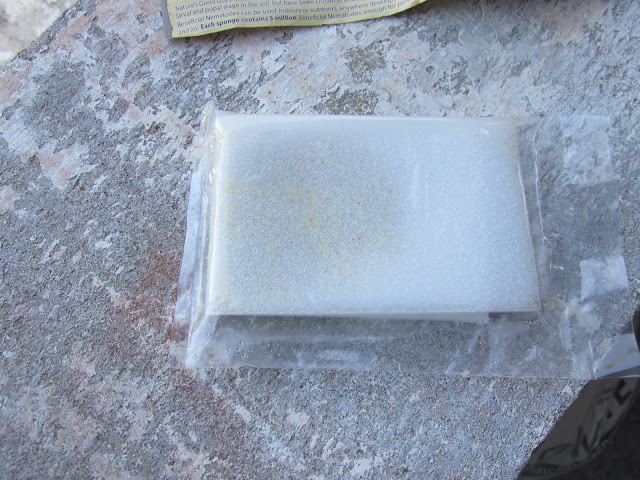 It actually came with 2 packages of sponges but I'm only showing one here. The sponges themselves smell like death. It's really awful. The application is easy though, water the area you're going to treat first, then squeeze the sponge into a big water-filled watering-can and they apply the nematodes over the wetted area, and then water the area again after application. It's like you're watering your garden three times. Each sponge is supposed to do 2 applications, for a total of 4 applications from two sponges. I went ahead and applied the nematodes yesterday once the sun had passed the house and the garden was in shadow.

I've seen little white cabbage moths flying about already so had also ordered some Bt (Bacillus thuringiensis). I'm planning on giving the beneficial nematodes 4 days to penetrate the soil before applying the Bt on Sunday. The rest of this week is supposed to be blazing hot with the weekend getting close to a 100 degrees (38 Celsius). It seems overly hot already, but luckily the humidity isn't as awful as it can be.
Posted by Phuong at 4:46 AM

For us, the big nuisance is Japanese beetles - they defoliate the fruit trees and beans plants and last year, they had a feast on many of the plums. My big question, though, would be how beneficial will they be since the beetles could just as easily fly in from the neighbours gardens. It will be interesting to see what your experience using them is.

I think milky spore is supposed to be really effective against Japanese beetles whose burrowing larva can devastate lawns. What I'm hoping is that as living organisms they'll spread in the soil and reproduce so that over time the number of flea beetles decrease as their larva are destroyed. I have to wonder if a lot more people are treating their lawns with milky spore because I haven't seen Japanese beetles in a couple of years and I only found a single grub while digging the garden this year.

My plants were much smaller this year when transplanted, especially the brassicas which I think affected their ability to handle the insanely high flea beetle infestation on our property. Honestly, in all the places I've gardened, I've never seen the number and variety of flea beetles that exist on this property.

I will definitely be watching to see if the nematodes help with flea beetles. Unfortunately, they migrate quite a distance so treating the garden alone may not be enough if you have any wooded areas nearby. You might also look for a spinosad spray, such as Monterey Garden Insect Spray. It is a safe product OMRI approved for organic gardens. It is a bacterial product like bT but besides working on caterpillars, it attacks flea beetles, onion thrips and even leaf miners, so it is more versatile than bT.

Hi David,
We live in the middle of suburbia but our lot was definitely "the wooded area" of the neighborhood. My husband ended up cutting down four dozen trees in our tiny backyard, they were very diseased and rotted from being so densely overgrown.

I'll need to order the spinosad since they don't sell it around here, it'll be useful for the leaf miners and maybe it can help with the vine borers.