It has been so hot but the weather finally broke and we got some much needed rain this beautiful Monday. Hopefully we'll get a little less than the 1.3 inches of rain they are predicting between tonight and tomorrow. 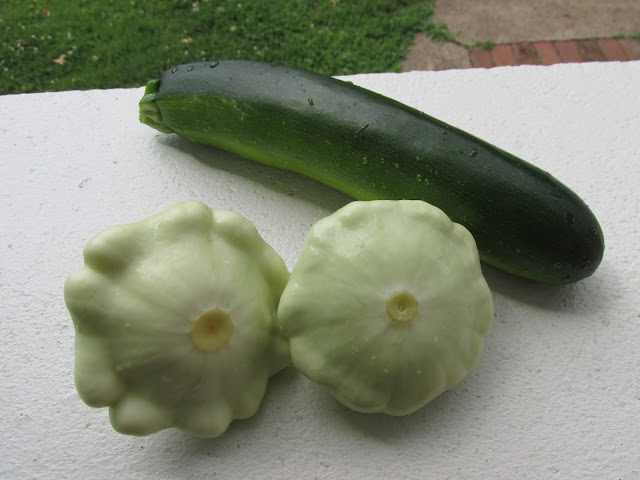 The Fordhook and Elite plants keep getting flipped over by the wind, but the zucchini they do produce are very nice. At this size they are not at all seedy with just a small spongy core. 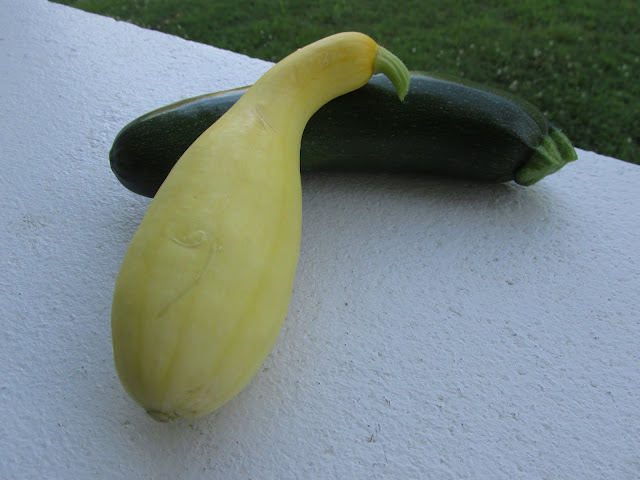 The summer squash plants are coming into their own right now with lots of female flowers forming. 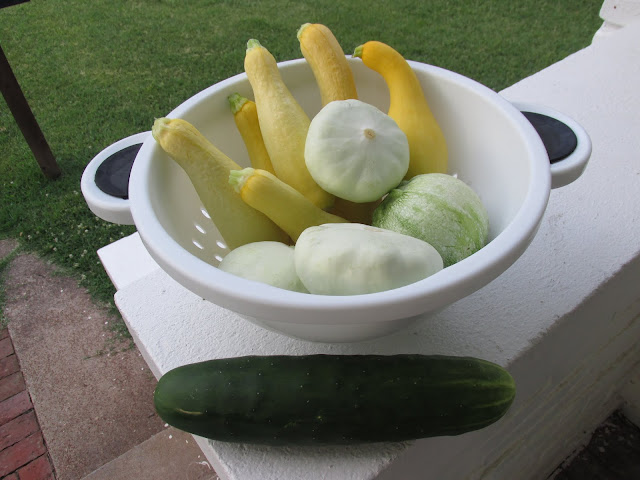 The round zucchini plants are trying so hard to put new roots down along their stems, but the wind keeps pushing them over and unmooring the little rootlets. I'm hoping they'll anchor themselves before their stem breaks from all the movement. They're not growing or producing as much because of it.

I found the first cucumber hiding near the ground. It's a little long in the tooth but there are a few more forming on the vines. These are growing in 5 feet tomato cages, which they have to be encouraged to climb.

At this point the garden is producing enough squash and zucchini, we could probably live off of them if we needed to. Lots of sautéed squash, squash in shrimp coconut curry, and squash hash have been eaten. I've ordered some udon to make squash and carrot curried noodles.

I'm having problems in the large fruiting tomato patch. Classic yellowing of the leaves signaling magnesium deficiency which can be treated with Epsom salts. It's moving up the stem very quickly in a few plants, so I'll probably have to dig some into the soil around those plants once the rain passes. I've also been thinking about growing comfrey to use as a foiler feed for my garden.

Please join us for a gratifying and fun-filled Harvest Monday hosted by Dave at Happy Acres.
Posted by Phuong at 9:22 PM

Crossing my fingers the wind does not damage your plants further, and your tomatoes recover quickly!

Thanks for reminding me curries are a thing that exists - I had already run out of ideas for what to do with my harvests.

Hi Phuong! lovely looking squashes! Mine are still picking up now. Can you please share the recipe for the squash and carrot curried noodles? Sounds extremely delicious!

One of our courgette (zucchini) plants has broken of completely. I don’t know whether wind is to blame or it’s been nibbled or rotted off.

Hi Ivy,
Curries are such a nice way to marry a bunch of different vegetables together. Lately I've been looking at stuffed zucchini recipes, which I'm planning to make very soon.

I think the tomato plants are succumbing to disease as well as magnesium deficiency. There are a few other things I'm going to try this weekend to see if I can stem the tide.

Hi Chhaya,
The curried noodle recipe is incredibly easy. I just sauté strips of carrot and onions in a little olive oil with Madras curry powder and salt, then add circles and half-moons of squash and zucchini and cook for a little bit, and then add soft udon noodles and a little more curry and salt. The noodles will soak up the liquid from the vegetables and cook that way.

I'll definitely do a more involved blog post when the noodles get delivered.

Hi Sue,
That is so disappointing. It's awful when large plants get destroyed. Usually my zucchini plants get storm damaged at the stem and then rot sets in and finishes them off.

We're getting tons of rain this week. I spent the weekend weeding and clearing the bottom leaves of the plants, hoping to help things dry out quickly once the rain stops. My worry is always powdery mildew or blight.

We too have lots of squash, and cukes. Thankfully the winds have skipped us, but we've had several inches of rain this week and the garden is unworkable at the moment.

Phuong, your variety of squashes are a delight.

Hi Dave,
The rain has been pretty crazy this week. I'm hoping it'll clear up tomorrow and dry out enough by the weekend to get some garden maintenance in. I do enjoy not having to water the garden and the cooler temps the rain brings.

Have you started your fall crops yet? There's a lot to do and it feels like the end up of summer is just around the corner.

Hi Shaheen,
It's been fun having an over abundance of squash and zucchini. A wonderful surprise.