The Fruiting Vegetable Garden in June 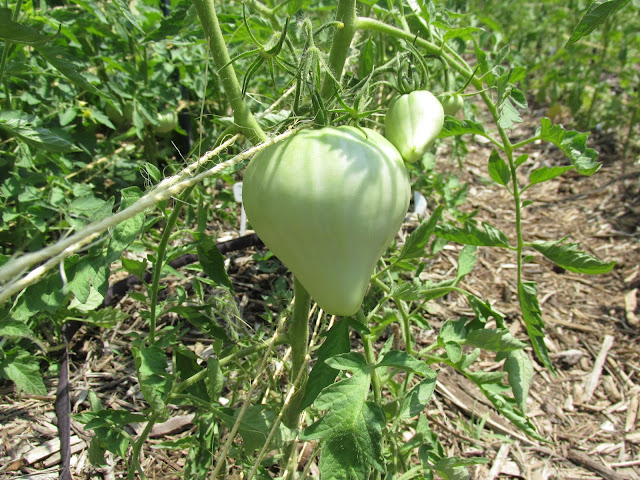 Golden King of Siberia, a giant yellow-gold tomato. The plant has wispy leaves and seems to hate our hot weather but it always manages to produce, interestingly it seems to put effort in ripening one giant tomato at a time. This one is about the size of my hand already I had to prop it up under a piece of string because the whole plant fell over trying to hold it up. 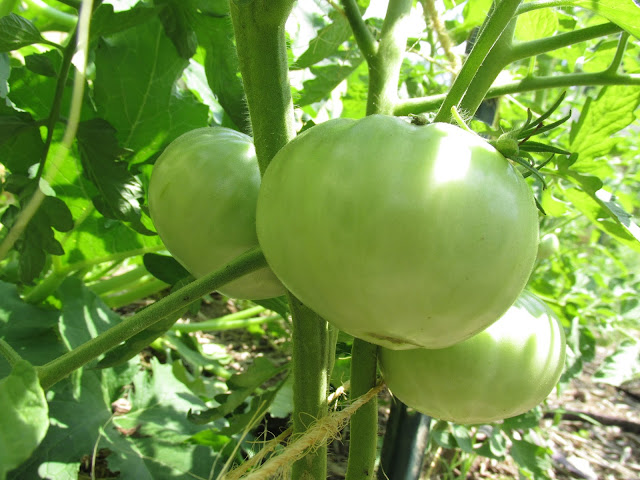 Purple Cherokee really seems to enjoy this year's drier weather. During wet years this variety cracks terribly which means it rots before ripening, either way it really needs to be supported so the tomatoes don't come in contact with the wet ground or be grown in raised beds with good drainage. It's a great variety that puts on lots of fruit, but I don't think we got a single tomato that didn't rot during last year's floods.

All the tomatoes are three weeks to a month behind, I had to replace 40 plants this year due to varmint destruction. Even so, it looks like it'll be a decent year for tomatoes. 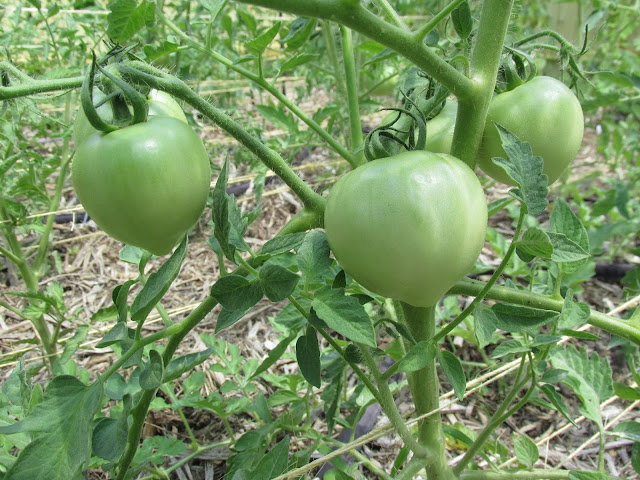 Celebrity (F1), I decided to grow a hybrid variety just as insurance against weather related issues. I've grown this variety before in desert country, it puts on two big flushes of tomatoes so would be classified as more of a semi-determinate. These fruits are more pointed at the blossom end than what is normal for this variety and they're not as ruffled on the shoulders, so I don't know what that means breeding wise. I do know it's a cross between a roma-like paste tomato and some round variety. 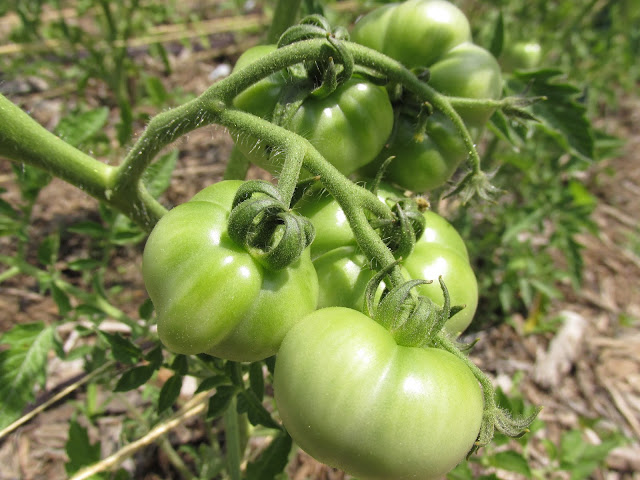 Homestead, a new variety for me. It's putting on some nice big bunches of tomatoes but they seem to be growing slowly. 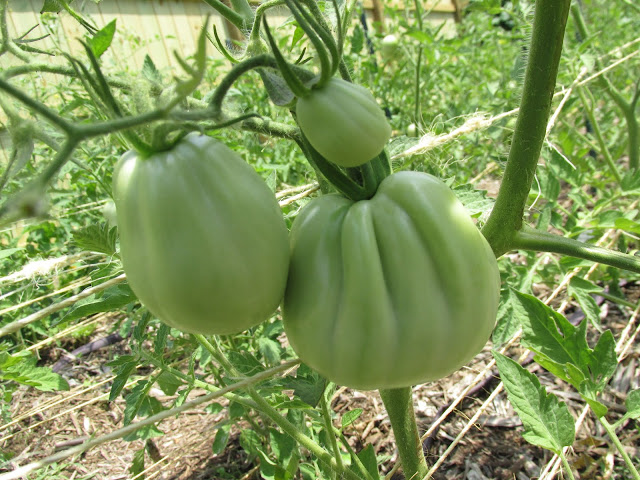 Pear tomato, a red Italian variety that's supposed to be nice and big with gorgeous ruffles. The big one is about the size of my palm but still has a long ways to go. 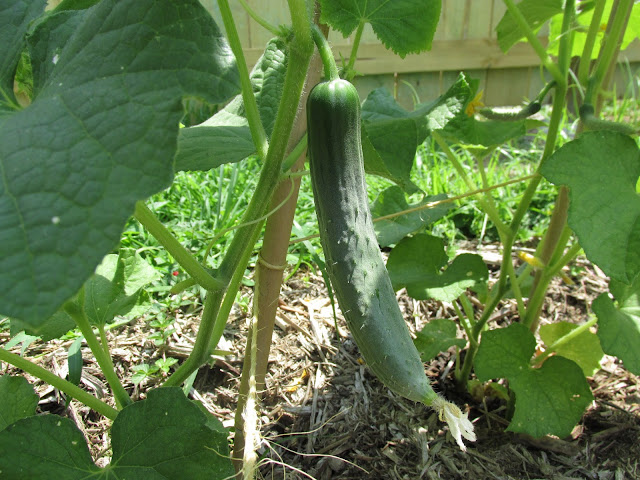 The cucumbers are finally coming on like crazy, there are little cucumbers everywhere which I've been hand-pollinating everyday. 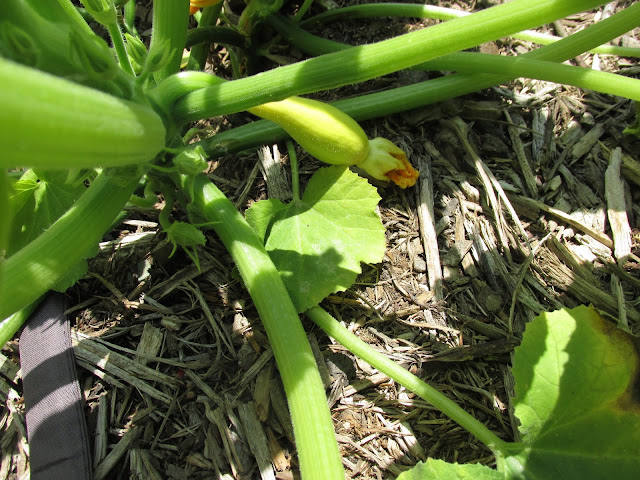 Ahhh, summer squash season is close at hand. The bees haven't found the squash plants yet so I've been trying to remember to hand pollinate, but it's difficult because the flowers don't stay viable very long. I purchased a couple of Yellow Crookneck plants but they've been hit by squash vine borers, they've recovered but aren't much bigger than this seeded plant. 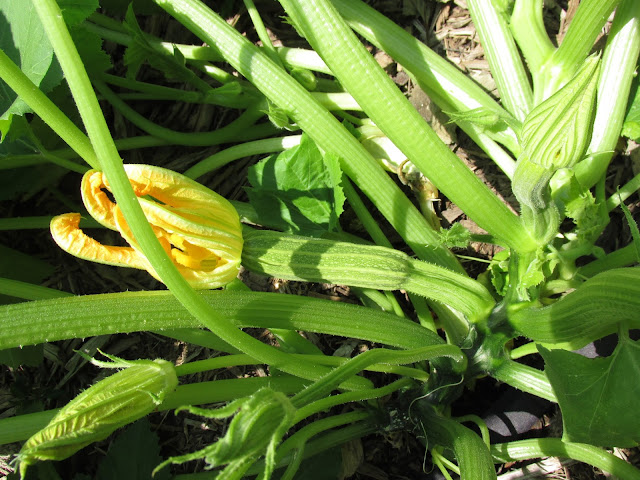 The zucchini plants are massive already, 4-5 feet across. So exciting. I tried pollinating them this morning so fingers crossed. 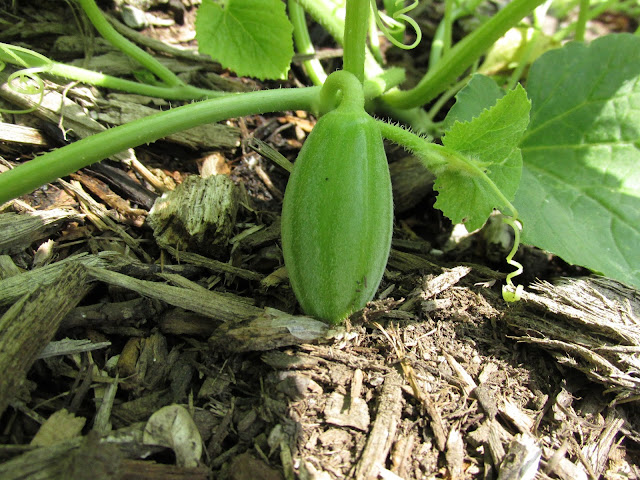 The Korean melons have set 3 or 4 fruits and they're starting to take over the pepper bed. I'm really hoping this is the same type of melons we ate while visiting Virginia. Unlike the Crimson Sweet watermelon plants which keep growing and growing but no female flowers have shown up yet. 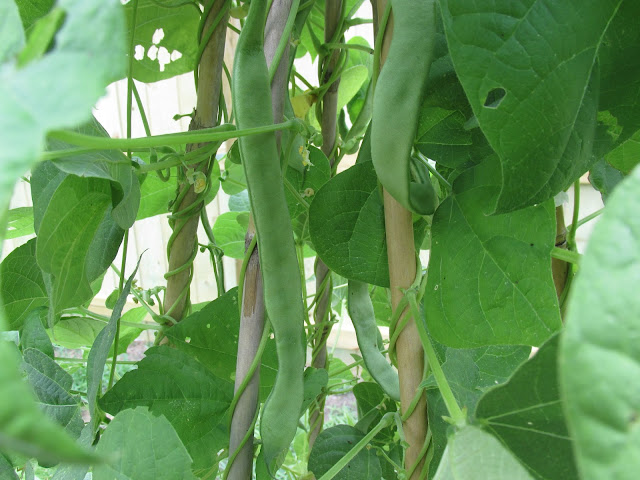 The snap pole beens are infected with rust with all the lower leaves dying out as the disease climbs up the plants, it's unlikely we'll be getting much green beans. They were heavily infested by flea beetles this spring which weakened the plants to begin with. 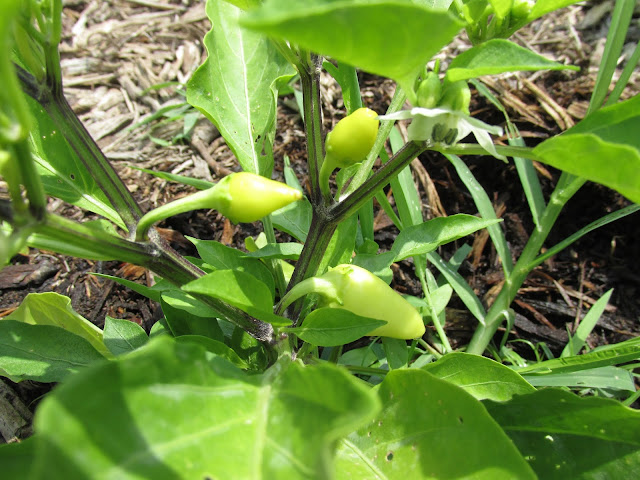 Santa Fe Grande is setting lots of little peppers. It's one of the hottest varieties I grow. The peppers are thin-walled but have a great flavor which I use in our salsa. We can salsa at varying levels of heat, but the heat does seem to mellow over time. I've increased the types of peppers and tomatoes in our salsa, and it is so good. The flavors are so complex and magical.

This year we have Serrano chile, Anaheim, Numex Big Jim, Numex Joe Parker, Santa Fe Grande, Lemon, and the hot Fish pepper. Sweet pepper wise, we're growing Corno Rosso, Carmagna Rosso, and Jimmy Nordello. Our daytime temps have been in the 100's (38 degrees Celsius) and nighttime temperatures at 75 degrees, so the plants have been aborting their flowers. This week it's supposed to cool down to the upper 80's (31 Celsius), so hopefully the plants can set more fruit before the next heat wave. Otherwise I'll be resorting to store bought peppers, knuckle bite.
Posted by Phuong at 1:35 PM

When temps in the 80's are considered a "cool down", you KNOW it's hot...guess I shouldn't complain!

I haven't had much luck yet with Cherokee Purple, but I'm trying again this year. If they like dry weather they should do REALLY well this year! Every since the year of "blight", I always grow a couple of hybrids as well - Juliet and Mountain Magic both rival heirlooms in terms of taste, so it's not like I'm making too much of a sacrifice (except when it comes to seed saving, something I want to try this year with a couple of the heirlooms).

Hi Margaret,
Temperature is all relative, everyone has a right to complain! At least our winters are fairly short.

I've never had a good year for Cherokee Purple either, I don't remember ever eating one of their fruits. But a friend grows hers in very raised beds and has good luck with that. It's her favorite tomato so I always give it a try. Are you done with your summer planting? I've got one six pack left of basil to plant and one six pack left of Mizuna. So close.

The garden is looking great! Squash and cucumbers already, how nice. Cherokee Purple is a favorite of mine but I don't grow it anymore because of the cracks. The organic farm down the road grows them so I just drop by and pick out a few perfect CPs, Brandywines and Pineapples. I let them take the risk and probably don't pay them more than I would for a few plants that won't produce.

Hi David,
That's so smart! Brandywines are my favorite variety but unless it's hot hot they take forever to ripen and flavor up. I would totally purchase Cherokee Purples if they were available nearby.

Your lettuces are looking so amazing and it's almost July. Crazy.

Too bad about the rust on the beans. Thankfully I have not seen it here. I got my first squash this week and my cukes look about like yours, almost ready. It looks like your tomatoes are doing well despite losing all those plants. I'm hoping it will be a good year for them, after a dismal year for many of them last year.

Hi Dave,
Oh yes, I'm hoping for a good year as well. It just takes a bad series of storms to decimate the tomatoes. The plants were loaded with big green tomatoes last year when the floods destroyed them. I think those same storm systems visited you last year as well.

I know you're growing tons of varieties of peppers this year, hopefully they're setting fruit in droves.

Your tomatoes look good. I've only got a few tiny ones right now. I'd like to see that Golden King of Siberia when it's ripe. It certainly looks unique.

Hi K,
I'm really hopeful the tomatoes and peppers will do well this year. The flowers in your garden are really beautiful and your broccoli and cabbage were huge.